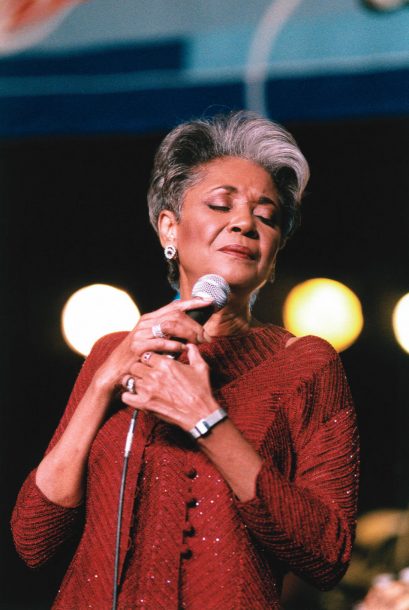 Greetings from cold, snowy Moscow, Idaho, temporary jazz capitol of America. Between February 21 and 23, this modest college town just east of the Washington state line is inundated with jazz activity, with a veritable nomadic encampment of student band competitions (junior high through college), master classes, workshops and a roster of celebrated artists.

The festival itself dates back to humble beginnings 34 years ago, and Hampton himself has been ensconced here since the late ’80s. At 92, and after impairing strokes a few years ago, Hampton still views the festival as an important part of his musical life. While Hampton’s presence onstage was minimal this year, he did appear in the traditional closing night show by his big band. After the festival, Hampton’s band was headed to a stint in a Seattle club. Come physical ailments or other obstacles, Hampton is living proof of the spirit of jazz as life-long enabler.

Rather than following the model of a festival that brings a different palette of music each year, the Hampton Festival has a high return rate among musicians. This is one of the places, for instance, you’re liable to hear bassist Brian Bromberg, he of tapping tendencies, and also the underrated guitarist John Stowell. The regulars in recent years have also included teenaged violinist Billy Contreras and veteran pianist Jane Jarvis.

The agenda for the festival’s four evening concerts is, generally, that of soloists backed by a house band. And check out this house band: pianist Hank Jones, bassist Christian McBride, guitarist Russell Malone and drummer Jeff Hamilton, needless to say, a “backup band” worth listening very closely to.

Paquito D’Rivera and Claudio Roditti paired up for a medley of tunes from “Black Orpheus,” and a stellar clutch of trombone talent gathered to pay respects to the late Al Grey, a beloved regular at this festival who died soon after his performance here a year ago. Bill Watrous, Benny Powell, Carl Fontana and Grey’s son Mike nimbly led the trombone charge.

Joe Lovano, who has been in Moscow numerous times before, showed up for a couple of tunes. It was one night after he had scooped up a Grammy in Los Angeles, but he was resting on no laurels, unveiling improvisations with meaning and heat, in the way only he can.

One of the self-contained groups of note this year was the impressive all-female combo Five Play Jazz Ensemble. Also appearing on its own was Ray Brown’s trio, with Geoff Keezer shining smartly, and Roy Hargrove’s quintet, veering the closest anyone came to a more contemporary report from the jazz muse.

Vocalists always play a strong role in the festival, which has featured Diana Krall, a Northwesterner herself, before and after her ascendancy to the higher planes of fame. Seattle-based, gospel-tinged singer Dee Daniels and Ethel Ennis, who broke out the site-specific “Above the Hills of Idaho,” are festival fixtures.

This year’s big vocal news was the debut appearance of Nancy Wilson, who played fast and loose with the melody of “Under My Skin” and worked the mic in her special way on “My Ship.” Young, upcoming singer Jane Monheit delivered perhaps the best, most limber, and most musical examples of scatting of the festival with her take on “On the Sunny Side of the Street.”

The Hampton Festival is not about surprise or contemporary ideas, per se. Instead, it’s a prime model of how to present jazz in the festival “off-season,” and in an educational, cultured context. The Moscow jazz entrenchment continues onward and forward. This year, plans were unveiled for building a $60 million Lionel Hampton Center on campus. Even George Bush Sr., a long-time Hampton friend, appeared via video to lend support. The center, slated to be finished in 2006, will be a combination performance space and also a museum to house archives important to America’s greatest art. Clearly, Moscow, Idaho is on the jazz map by now.