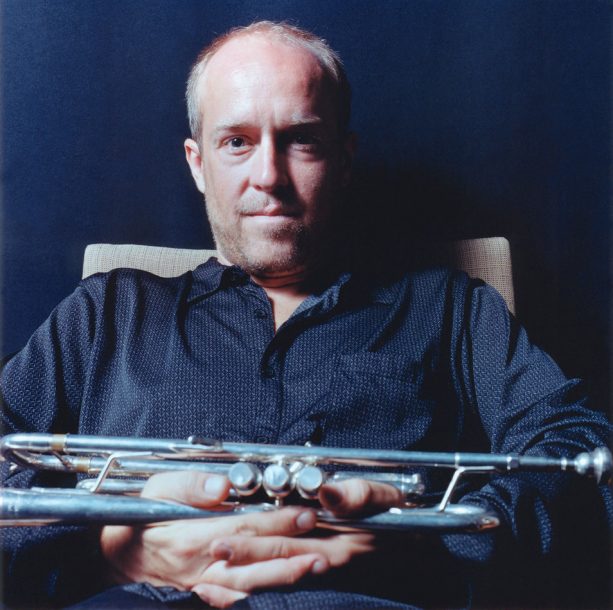 The Library of Congress presented trumpeter, composer and controversy-stirrer Dave Douglas in a delightful portrait of three colors on October 14. The debut of his emotionally complex commissioned piece, “Irrational Exuberance for Violin and Piano,” for piano and violin, was the centerpiece of the evening, while performances with his groups, Charms of the Night Sky and Tiny Bell Trio, rounded out the concert.

Commissioned by The McKim Fund, Douglas wrote “Irrational Exuberance for Violin and Piano” for the husband-and-wife team of violinist Mark Feldman and pianist Sylvie Courvoisier as a wedding gift. The marital power-games that usually accommodate modern-day romance apparently inspired Douglas because the heady composition thrived on inner-tension: For every lightening bolt of dissonance from Feldman, Courvoisier answered with jolting thunderclaps. As both exchanged disjointed melodies and percussive jabs, the precise yet convoluted argument climaxed into an ecstatic brawl. Once the two were at their most intense, the mood became more serene as Feldman’s melodic phrases grew less angular and more contoured. Courvoisier underscored his yearning melodies with ruminative counterpoints that were equal parts Bill Evans and Cecil Taylor.

At once messy and majestic, “Irrational Exuberance for Violin and Piano” aptly captured the core of Douglas’ yin-yang musical aesthetic. The commissioned work may have been the engagement’s most ambitious statement, but it wasn’t, however, the evening’s most rewarding.

Before Feldman and Courvoisier’s “Sonny & Cher goes avant-garde” performance, Douglas and his chamber ensemble, Charms of the Night Sky, bewitched the audience with their intoxicating blend of tango, klezmer, Balkan and film music, while The Tiny Bell Trio delivered an edgier blend of klezmer, Balkan and Monk.

Overall, Charms of the Night Sky’s stately poise was most ideal for the Coolidge Auditorium, while The Tiny Bell Trio best-embodied jazz’s sense of swing.