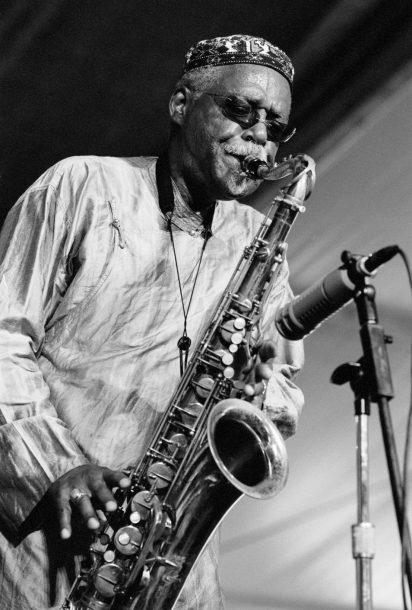 The Vail festival grew out of an idea that originated in Colorado in 1963 when Dick Gibson began his jazz parties. The Gibson affair became the model for dozens of similar gatherings but, with Gibson and his parties long gone, Vail expands beyond private jam sessions for wealthy subscribers. Beginning in late July with a series of club dates and public concerts by national and Colorado musicians, the festival culminates in three nights and three days of Labor Day weekend programs by a diverse collection of name artists.

The nonprofit Vail Jazz Foundation is headed by Howard Stone, a retired Los Angeles real estate attorney who divides his year between California and this pristine ski village high in the Rocky Mountains. It supplies modern mainstream jazz to an audience that is still predominantly middle-aged or older, but the foundation’s two-part mission is to develop jazz players and listeners of the future.

Jazz In the Schools is a year-round program aimed at making jazz part of the listening of youngsters who are now weaned on rap, hip-hop and punk. The Vail Jazz Workshop builds the improvisational skills of teenaged musicians. The workshop’s intensive 10 days of instruction give 12 high school-age scholarship winners from around the country performance experience under the guidance of bassist and composer John Clayton, his saxophonist brother Jeff and the other members of their band, pianist Bill Cunliffe, trumpeter Terell Stafford and drummer Carl Allen. The teachers do not emphasize rote chords-and-scales methods that produce soundalikes, but individuality, group cooperation and mutual support. “You know how to read,” John Clayton told the young players in one session, “you know your instruments. That’s not a problem. We want to get to what comes from here,” he said, placing his hand over his heart. “Playing jazz is not about ‘me,'” he said on another day. “It’s about what we can do together.”

What they did together and individually in their final concert during the festival had professionals like Stafford, drummer Ali Jackson and trumpeter Ingrid Jensen dropping their jaws in amazement. The students’ repertoire included demanding material like Freddie Hubbard’s “Birdlike,” Duke Ellington’s “Take the Coltrane” and Sonny Stitt’s “Eternal Triangle.” “It’s really something when you’re in awe of someone under 20,” Jensen said after 17-year-old Brandon Lee of Houston finished a blistering trumpet solo full of edgy changes.

In the festival’s main events, Jensen herself prompted a good deal of jaw-dropping with the power, intricacy and range of her playing on two Coltrane pieces, “Impressions” and “Giant Steps.” The latter included a blazing duet with Stafford, whose force and cogency in solo had audiences cheering.

No one got the crowds more worked up than trombonist Wycliffe Gordon, who unleashed all of his technique but was at his most musical when show and flash took a back seat to straightforward bebop blowing. His solo on Joe Henderson’s “Recorda Me” was deeply satisfying.

The festival’s diversity and seriousness of musical purpose were evident in lineups that included veteran saxophonists Lou Donaldson and David “Fathead” Newman alongside 30-somethings Ron Blake and Craig Handy; 26-year-old drum discovery Lorca Hart and bassist Dwayne Burno accompanying Newman and pianist Benny Green; Donaldson’s guitarist Randy Johnston and drummer Fukushi Tainaka backing Cunliffe in his powerful organ concert; Hart and John Clayton with Green in a trio session full of Green’s brilliant playing; Green, Burno, guitarist Mark Whitfield and drummer Carl Allen burning through Charlie Parker’s “Dexterity”; Green and Eric Reed in a memorable two-piano recital; Jeff Clayton alluding to Johnny Hodges, Earl Bostic and Cannonball Adderley in his ballad version of “Take the ‘A’ Train;” John Clayton’s gorgeous bowing with his own band and in Green’s trio. Dr. Lonnie Smith played the Hammond B-3 with several combinations of musicians, never failing to find the blues core of a piece or to generate boiling swing. In four appearances with her trio (bassist Thomas Bramerie, drummer Ali Jackson, pianist Jim Pryor), Dee Dee Bridgewater scatted, strutted, slinked and used all of her stagecraft. She also showed that when she simply sings, as she did in “Angel Eyes” and “Stairway to the Stars,” she is a superb interpreter of song. When Bridgewater and trumpeter Jensen teamed up on “Caravan,” their duet on the last chorus was one of the great spontaneous events of the festival.