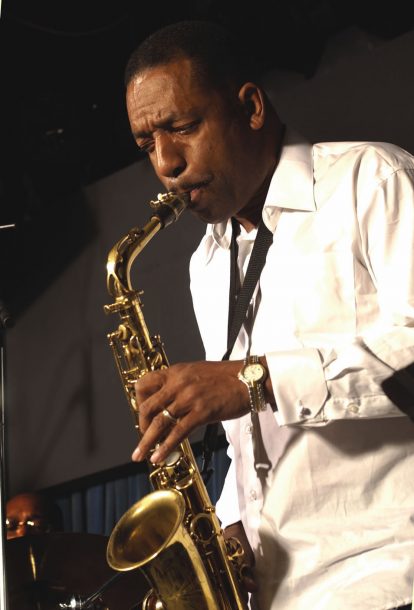 Estoril, near Lisbon on Portugal’s sun-drenched coast, is the home of one of Europe’s most intimate jazz events. For the festival’s 19th year, impresario Duarte Mendonca presented concerts by four established artists and two intriguing lesser-known musicians, Dena DeRose and Bill Carrothers, between July 7 and 15. The festival also included club performances and a series of drum workshops conducted inspirationally by Billy Hart.

Diana Krall’s quartet appeared at the outdoor Palmela Park Auditorium on a July night of unseasonable cold and stiff breezes. “Are you okay out there?” Krall asked the audience. “I know you must be freezing.” To the accompaniment of wind roaring through trees overarching the crowd, she warmed them by opening with “I Love Being Here With You.”

Since the addition of drummer Rodney Green, Krall’s group has taken a decided turn from its Nat Cole Trio aspect and become a tightly integrated mainstream quartet. Cut loose from his Portland anchorage, guitarist Dan Faehnle is a superb replacement for Russell Malone. Faehnle, Green and bassist Ben Wolfe developed impressive grooves under Krall’s vocals and piano solos. Krall’s “I’ve Got You Under My Skin” was even slower and more insinuating than the version on her When I Look In Your Eyes CD.

Opening for Krall, Dena DeRose offered samples of the exhilarating work she was doing with her quartet in the Du Arte Garden of the Estoril Casino. A solid piano soloist, DeRose sings lightly with flexibility that is underscored when she scats in unison with her single-note-line improvisations. At the casino, she, trumpeter Ingrid Jensen, bassist Paul Gill and drummer Hart played some of the hardest-swinging music heard all week at Estoril. On Tom Harrell’s “Terristris,” DeRose and Hart generated extraordinary momentum behind Jensen. The trumpeter’s soloing seemed to have moved to a new level of cogency and drive. Jensen said the crowd motion and the neon flashing from the surrounding casino windows made her nervous. The nervousness was not evident in her playing. Donald Harrison left his soprano saxophone in its case and played only alto. A virtuoso who had the Estoril audience on its feet cheering, he is one of the few alto players to incorporate an undiluted Cannonball Adderley influence. Harrison also takes cues from Cannonball in his gregarious announcements and explanations. He follows Adderley’s practice of beguiling the audience with basic blues and blues-oriented forms, softening them up for his more demanding original material. New Orleans trumpeter Christian Scott, aged 17, has good technique with rough edges, a gorgeous lower register and enormous potential. He soloed impressively on “So What.” His ballad feature, “Misty,” had a lovely flow of ideas, but was marred by a cadenza that ended several times before it finally stopped. Harrison’s pianist, Glenn Patscha, was satisfying in every respect.

“We twist things,” Nneena Freelon told the audience for her festival opener. She might profitably have twisted less and embraced melody more, as in her gorgeous first chorus of “I Love You” and her perfect delivery of “A Time For Love.” Even with lightweight material like “Say A Little Prayer” and “Come Into My Life,” Freelon projected swing and enthusiasm, but on this night her scatting often muffled creativity rather than enhancing it.

On a night of perfect weather, with the full moon illuminating the park, trumpeter Nicholas Payton’s 12-piece band not only paid tribute to Louis Armstrong but also recognized Armstrong’s line of trumpet descendants. On “Tight Like This,” his writing and playing summoned up Gil Evans and Miles Davis. On his composition “Dear Louis,” Payton was astonishingly like Clifford Brown in tone, execution and the harmonic concept of their mutual idol Fats Navarro. In “The Peanut Vendor,” his fullness, aggressiveness and multitude of notes spoke of Freddie Hubbard.

Payton’s playing and that of the other soloists was buoyed by his well-crafted arrangements. Saxophonists Bill Easly, Tim Warfield and Scott Robinson were standouts. Pianist Bill Carrothers’ trio brought to Estoril a touch of the avant-. Carrothers’ commitment to fluidity and freedom led him through fields of quotes and interpolations, particularly in “Brother Can You Spare A Dime.” Occasionally, it was a challenge to keep track of where the “1” was when he, bassist Nicholas Thys and drummer Dre Pellemaerts were in full flight, but their energy, good humor and headlong motion made that a minor concern.