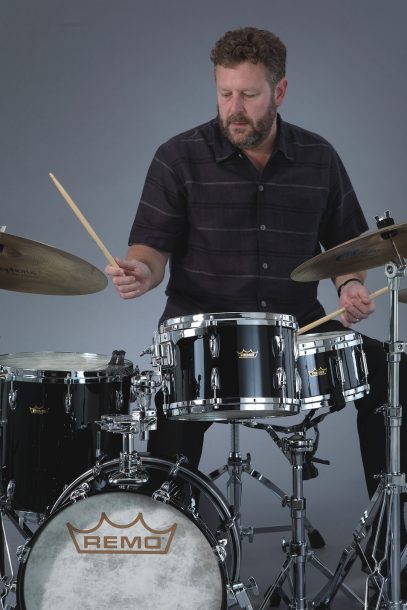 Hamilton’s springtime foray into the interior of Washington State gave Pacific Northwest listeners an opportunity to hear the latest edition of his trio. With pianist Tamir Hendelman and bassist Christoph Luty, the drummer did a series of workshops and concerts at Central Washington University in Ellensburg and Columbia Basin College in Pasco. Playing to a full house in the CWU student union building, Hamilton demonstrated his musicianship, mastery of time and engaging leadership.

Every aspect of Hamilton’s drumming was impressive, none more than his achievement with wire brushes. In support or in solo, the swing intensified when he used brushes rather than sticks at medium and fast tempos. But he turned the tables, notably in “Like a Lover,” and employed sticks with softness possible only through an exquisite degree of control. In a rhythmically complex, nearly convoluted, arrangement of “I Didn’t Know What Time It Was,” the bassist and pianist seemed to fall into momentary confusion, but Hamilton always knew what time it was and led them to safety. He created melody in his solo on “Eu vim da Bahia” as surely as if he were playing a horn. In the process he used brushes, his fingertips, the palms of his hands, and his wedding ring against the rim of the snare drum. “Rhythm-a-ning” may have been a tad too fast for anything much to happen beyond the successful negotiation of a challenging tempo, but that was satisfaction enough. Luty’s eccentric arrangement of “C-Jam Blues” inspired another brilliant Hamilton solo with brushes. Hamilton’s lyrical “Time Passes On” showed his compositional ability. His reharmonization (with an assist from his previous pianist, Larry Fuller) of “Isn’t It Romantic?” and the changes of pace in his arrangement made it one of the highlights of the evening. For all of Hamilton’s technique, he never uses it merely for show. Intricacy and group dynamics are the hallmarks of his playing and of interaction in the trio.

Each of the new sidemen brings attributes of muscularity and subtlety that have long characterized Hamilton’s groups. The 29-year-old Hendelman made his orientation clear in his composition “Bennissimo.” He named the piece in honor of Benny Green, Hamilton’s longtime colleague in the Ray Brown Trio and a role model for younger pianists, as Oscar Peterson was for Green. Hendelman’s playing is firmly in the tradition of Peterson and Green, particularly in regard to its strength and swing, but his touch and use of dynamics in “Like a Lover” displayed an individual dimension of his talent that warrants greater exposure.

Luty’s arco exposition of the melody in the same piece and his bowed solos in several others were reminiscent in their perfection of the work of John Clayton, one of his teachers. His pizzicato introduction to “Eu vim da Bahia” was fast, full of double stops and high on the fingerboard. He was a solid walker behind Hendelman and Hamilton in straight-ahead blowing and fierce in his breaks on “Little Old Lady,” played at a furious tempo. Hendelman and Luty are also contributing compositions and arrangements, enriching the repertoire of a trio that already has an interesting book. In addition to their work in the trio, both sidemen are members of the Clayton/Hamilton Jazz Orchestra.