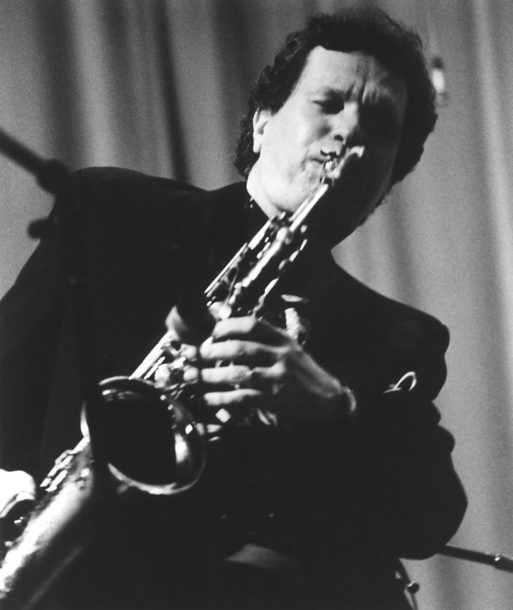 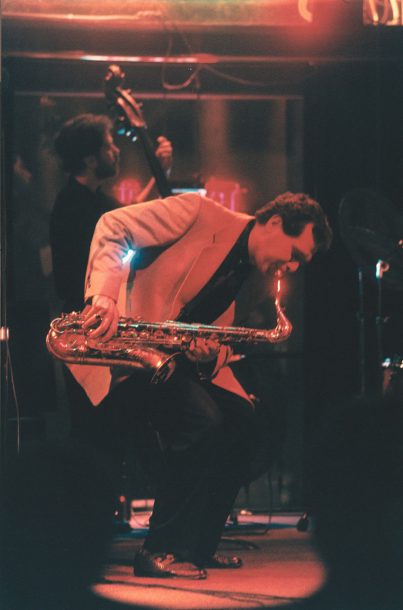 Some cats just get physical with their axe: bend those knees, swing that horn sideways, lift that leg, wrench every blessed blue emotion out of that intricate set of brass piping and send it on a beeline from his gut to yours. Such was the case with a young firebrand tenor player out of Cleveland who blew tenor sax with an urgency that suggested caffeine addiction at minimum; service to a higher calling of music for certain; blast furnace abandon-absolutely. That was then, circa late ’60s and early ’70s at Cleveland’s lamented Smiling Dog Saloon. This is now, and the mature Ernie Krivda, all of 55, still blowing heat, but with a swinger’s smile etched in the middle of every note.

Krivda is a true son of Cleveland, raised at the feet of his Coleman Hawkins/Benny Goodman-loving, tenor-and-clarinet-playing father, born to the music. “The first recordings I heard were Coleman Hawkins, Roy Eldridge. I remember the tune ‘Stuffy’ vividly; I must have been three when I started hearing that.” Krivda smiles at the memory as we chat amidst the jazz-proud clutter of the Tri-C JazzFest Cleveland offices. Currently on the Cuyahoga Community College (Tri-C) Jazz Studies faculty, he grew up on good sax. “I always wanted to play the saxophone, but in those days you had to start on the clarinet, so at six I got a clarinet and my dad taught me.”

Despite dad’s mild discouragements from any jazz aspirations-“Oh, you don’t want to play jazz, you should be an orchestral clarinet player”-at 16, a relative’s alto saxophone sent him straight into dance aggregations like the Weasel Parker Band. High-school graduation released him to the road with the Jimmy Dorsey band; the draft led him into the National Guard band and the jazz epidemic was deep in his soul. That was the early ’60s. It was the late ’60s and early ’70s before the Cleveland scene began to take note of his volcanic intensity, and aerobic relationship with the tenor. “In the ’60s the jazz scene started to dry up so I got some gigs with R&B bands, then when Blood, Sweat & Tears happened there were these horn bands. That was a terrible time; you still played, but there was very little opportunity for jazz. But the Smiling Dog Saloon was a big thing for me,” reminisces Krivda.

As always seems the case in good towns like Cleveland, which despite their charms lack that certain creative music cutting edge, the lure of other vistas eventually broke up the old gang. Krivda blew so much tenor that Cannonball Adderley recommended him to Quincy Jones. But why leave the comforts of home? “One of the unfortunate things about Cleveland is that many musicians, by the time they start really playing, they get pushed to go somewhere else: ‘Oh, you have to go to New York-that’s where you have to be.’ I always had in my mind to do that, and I did go out to the West Coast as well. Cannon hooked me up with Quincy Jones and I was on his last touring band [1975-76]. But I didn’t feel comfortable out there.

“I kept thinking, ‘I gotta get to New York.’ I was [in New York] six months and I had a recording contract [1977] with Inner City Records! But it wasn’t exactly what I had envisioned,” recalls Krivda. “I have ideas for projects, and if I get an idea I get focused on it, nothing else interests me but this thing I want to accomplish. And it was very difficult for me to do that there, because New York has its own requirements about what you do when you go there, it’s about playing as many gigs as you can and trying to find some kind of focus group where you can get yourself off the ground. It wasn’t a comfortable place for me to be. I’m putting out records but I’m not doing the things I wanted to do. So I came back [to Cleveland] in 1980, doing the projects and playing the music that I wanted to do.”

But don’t they say you can’t go back home?

“I like being around family, old friends, my history-it strengthens me. If I have a project in mind it’s easier for me to get it together. For example, I wanted to do Stan Getz’s “Focus” and I was able to get that done much easier here. When you’re in [New York] you have to commit yourself to a certain group of people. Here I can make a recording fronting a big band and then three weeks later do the Stan Getz Focus project at Severance Hall, then go down to Cincinnati and play at the Blue Wisp with a postbop quartet. I don’t have to be beholden to a particular group or clique that you have to belong to in media centers in order to get ahead.”

Krivda has significantly changed conception from his raw, Smiling Dog days. “That era was the late ’60s, going into the ’70s; the traditional aspects of jazz were not being practiced. One reason, there was no place to do it, secondly a revolution was engulfing the country and it had its effect on all aspects. A lot of things American were looked upon negatively; people were searching other places for musical inspiration, so it was a very interesting time. There was a mix of influences: Indian, gamelan, 20th century European music. And this was like the early days of fusion. The fusion was not this slick, smooth jazz thing, it was this volatile mix of different influences and a lot of |

it was very powerful and exciting. I expanded my thing on the saxophone a great deal at this particular time.”

Changing times tend to change musical perspectives. “In the late ’80s I started to tape myself practicing and my perspective started to change. I wanted to play music that I wanted to listen to. This recalled a quote Skip Hadden made years ago when we were doing all that exploratory music. We were listening to something we had done and he said, ‘Ya know, that stuff is a lot more fun to play than it is to listen to.’ And I remembered the quote, but it didn’t make sense to me until this point. I started to empathize with the audience; you want to play music that you want to listen to as an audience member.”

Krivda’s back-to-roots philosophy became clearer when “my Dad got sick and couldn’t work anymore, so I would go over to the house and play piano for him; we’d go into the basement and jam. There was no profound epiphany; it was more of a gradual thing. I’m playing and I’m thinking, ‘This feels nice; I’m liking this.’ I like the sounds, I like the tunes and I’m back in touch with certain things that I had always done. So I’m moving in this [swing] direction.”

The three covenants that currently guide Krivda are swing, blues and American song. You can find him preaching that mantra to his students in Tri-C’s growing jazz studies program; you can find those elements right down front when he’s leading his Fat Tuesday Big Band through its weekly gigs and Koch Jazz recordings.

“There isn’t another rhythm in the world like swing. Of all the elements that make up jazz it is the single element that stands by itself. That rhythm exists to be dance music. We had [swing dancer] Frankie Manning here at the school and you heard about how dancers influenced musicians. So much of this musical vocabulary comes from that relationship. Most musicians took this thing for granted: they understood it but nobody ever taught this; it was just something you did. As you get older you start to see what’s important, then you think about giving something back.”

Krivda feeds this urge in his classes and through his bands, including the Tri-C Jazz Studies faculty ensemble Swing City. “Whether you’re a parent or a teacher, you’ve gone through this long rigmarole to come to certain conclusions; they are not conclusions set in stone, but they’re about a way of being and growing. So you try to give that perspective and guide students in a way that maybe they don’t have to go through some of the same things that you did.”

Krivda has found ready homes for his recordings, the most recent being Koch Jazz, which has turned out his last four efforts. The latest is The Band That Swings, with his Fat Tuesday Big Band. “Recordings are like your children and you have warm memories of them. I don’t think about them too much because I am in a state of movement, and they are not,” says Krivda. “I do like parts of the early Inner City stuff from the view that it’s almost another person, that kid of 20-plus years ago. They featured a lot of dark moods, which the young kids today seem drawn to. I always hear from them how they relate to that ‘world view.’ I am pleased with some of the Cadence things that captured a hot working quartet, a group of virtuosic cats goin’ after it. I enjoy the newer [Koch] things because they reflect my current interests. I like things swinging and lyrical, with a strong ensemble presence these days.”

“A lot of music from the ’30s and ’40s: Benny Goodman big bands & small groups; Jimmy Lunceford band; Count Basie band; small groups that recorded in the 1940s-the Commodore sessions, going back to the JATP recordings. I’ve just been revisiting that music a lot. Compilations of Lester Young, and I continue listening to singers who continue to have an impact on me: Frank Sinatra, Ella, Billie Holiday, Louis Armstrong, people like that.”