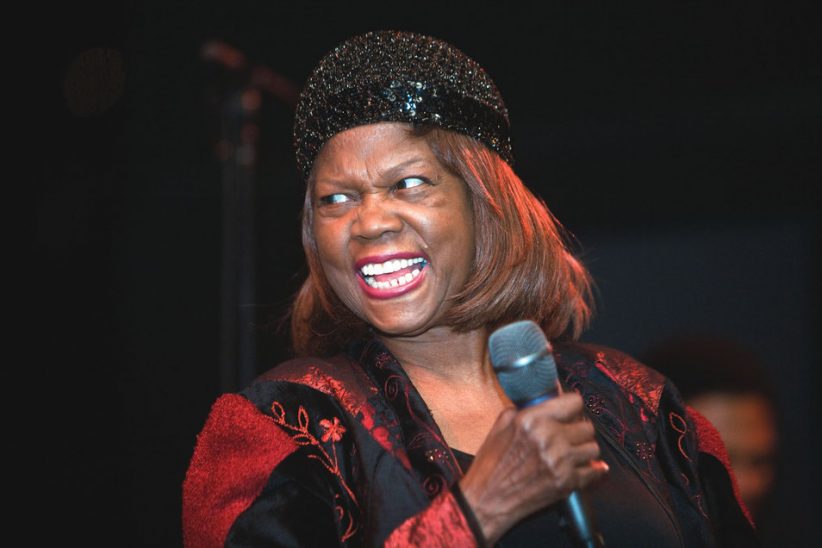 The story of rock ‘n’ roll is usually told as a triumphant march, a populist victory for exuberant kids over the forces of repression and cultural conformity. But the rock revolution, particularly the second wave spearheaded by the British Invasion, also inflicted extensive casualties, in many cases sweeping away the livelihoods of the artists who paved the way for the insurrection in the first place. As a singer who came of age performing with jazz orchestras in the 1940s, Ernestine Anderson was on the frontline when the seismic forces unleashed by rock swept away most of the American music market.

A commanding jazz vocalist with a powerful feeling for the blues, Anderson was born in Houston, raised in Seattle and weaned on gospel. In the late 1950s she’d gained an international following with a series of polished recordings for Mercury. But as the music business changed, Anderson found herself unable to work consistently in the United States. In a poetic twist, the tsunami triggered by the Beatles forced many American jazz and blues singers to seek work in the United Kingdom, which is where Anderson found a receptive audience in 1965. (Rare footage can be found on YouTube of Anderson in her prime on German television, singing “Moanin'” in 1967 with the formidable South African organist Cherry Wainer.)

“When rock ‘n’ roll became the music of America, I moved to London for two years,” says Anderson, 80, from her home in Seattle. “In order to keep working I had to leave the country. And when I came back, I stopped singing for a while. I just didn’t want to go through the hassle of starting all over again. I decided maybe it was time for me to give it up, and that’s what I did.”

Fortunately, Anderson has enjoyed a career with a long, productive second act. After a decade of obscurity, she surfaced with a splash when bassist Ray Brown heard her sing at a jazz party on Vancouver Island in 1976. “At the end of it Ray asked me if I was ready to come back and start singing again,” Anderson says. “I told him I needed a record, I couldn’t just start cold. I needed something out there for people to hear. He called me a week later and said I’ve booked you at the Concord Jazz Festival and they’re going to record you there. That was my first recording after getting back in the business.”

With Brown serving as her manager and the careful attention of Concord’s Carl Jefferson, Anderson spent 15 years with the label, recording more than a dozen consistently rewarding albums in a variety of settings. “Carl really had his hand on the pulse of the music, and knew how to record different artists,” Anderson says. “Once a record was made, he knew how to get behind it and promote it. He was a giant that way.”

Showcasing her gift for delivering standards with rhythmic ease and emotional honesty and her bone-deep feeling for the blues, the Concord albums paired her with powerhouse big bands and a succession of superlative accompanists, including Hank Jones, Monty Alexander and Gene Harris. She felt particularly comfortable with George Shearing, recording a sensational set of lustrous ballads and midtempo, finger-snapping standards on 1988’s A Perfect Match. In a sure sign of flattery, Anderson has seen her signature tunes, particularly “I Love Being Here With You” and “Never Make Your Move Too Soon,” widely borrowed by other singers.

Raised in a musical household, she absorbed blues and jazz listening to the radio at home with her parents, and gospel and hymns at church with her father. “My mother was a housewife and my father worked on the Great Northern Railroad,” Anderson recalls. “When I was growing up he sang bass in a quartet in Houston. They used to sing in different churches and I used to follow my dad around because I loved hearing them sing.”

Anderson learned how to win over an audience at a very young age. She first gained attention as a 12-year-old who was chaperoned for Sunday performances with trumpeter Russell Jacquet at Houston’s El Dorado Ballroom. By 18 she was touring with a jump-blues band led by R&B pioneer Johnny Otis. Early on she worshipped Sarah Vaughan, but when Otis’ tenor saxophonist Paul Quinichette told her she needed to find her own sound if she wanted a career if jazz, Anderson stopped listening to vocalists for several years and concentrated on deciphering the new bebop recordings by Charlie Parker and Dizzy Gillespie. After a few years, she made jazz’s major leagues, joining Lionel Hampton’s hugely popular orchestra in 1952.

“Hamp was in town and my husband heard that Betty Carter was leaving the orchestra and that he was looking for a singer,” Anderson says. “He pushed me to go and audition for the band and I got the job. I traveled with that band for a year, and it was one of the hottest bands that Lionel ever had. Quincy Jones was there too and he was writing for the band and Jimmy Scott was the other singer.”

With Hampton she was immediately thrust into the big time, performing at high-profile gigs like Dwight D. Eisenhower’s first inauguration. At the time, the orchestra bristled with brilliant musicians, including saxophonists Gigi Gryce and Jerome Richardson, trombonist Jimmy Cleveland and a trumpet section featuring Art Farmer, Quincy Jones and Clifford Brown. But like all of Hamp’s vocalists, Anderson didn’t last long. She left the band after a year rather than embark on what turned out to be an ill-fated European tour (she was replaced by Annie Ross). She did make an important connection with Gryce, recording a definitive version of his tune “Social Call” on his 1955 Savoy album Nica’s Tempo.

A partnership with Swedish trumpeter Rolf Ericson led to a three-month Scandinavian tour, which launched Anderson as a major attraction in Europe. She recorded the album Hot Cargo in 1956 with a Swedish orchestra led by Harry Arnold, an album that became a hit when it was released in the U.S. by Mercury. “It was a wonderful experience,” Anderson says. “I found out that the Swedish people love jazz. After that I found that to be true all over Europe and Asia, every place except our own country.”

She settled in San Francisco when she returned to the States, and quickly won a devoted fan in Ralph J. Gleason, the incisive San Francisco Chronicle columnist who was a founding editor at Rolling Stone and helped launch the Monterey Jazz Festival. In a striking case of the power of the jazz press, he made it his mission to spread the word about Anderson’s talent. Landing a coveted spot at the first Monterey Jazz Festival in 1958 performing with piano ace Gerald Wiggins, Anderson cemented her status as rising star. The following year DownBeat presented her with the “New Star” award.

Anderson hasn’t won another jazz poll for half a century, an oversight that might partly be explained by her decision to spend most of her career based on the West Coast. Like the beloved but perennially underappreciated Etta Jones, who went about her business recording one captivating album after another until she passed in 2001, Anderson brings a quiet professionalism to every project. She puts her stamp on a song with her relaxed phrasing and supple sense of time, swinging fiercely and slyly generating tension by breaking up lines in unexpected places. Her mellow contralto has proven remarkably resilient, sounding warm and pleasingly weathered on her recent albums.

It seems particularly fitting that Anderson has found a late-career home at HighNote, the label responsible for documenting Jones’ final years. Released in January, Anderson’s latest album, A Song for You, feels like a gift and a valediction. The session features Jones’ longtime musical partner, tenor saxophonist Houston Person, who offers purring commentary to Anderson’s playful reading of “This Can’t Be Love” and a ravishing rendition of “Skylark.” But it’s the closing track, a devastating version of “For All We Know,” that captures the essence of Anderson’s music. Tough but tender, vulnerable but self-assured and utterly without self-pity, Anderson offers a fearless glimpse at mortality.

“Singing is what keeps me going,” Anderson says. “It’s my life’s work. I don’t know anything else to do and retirement is out of the question.”