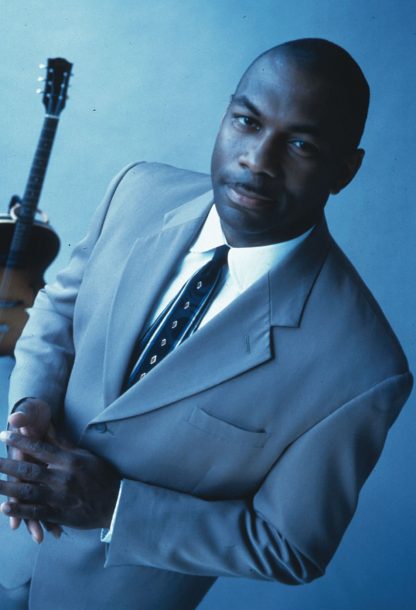 Guitarist Eric Essix is a broad-based musician with an undeniably bright future.

A lifelong resident of Birmingham, Alabama, he began playing guitar in church at age nine. Early influences included the Temptations, the Jackson Five, and James Brown, as well as his father’s favorites, Miles Davis and Wes Montgomery. In high school he discovered Jimi Hendrix, and later Jeff Beck and Al Di Meola. At 17, he saw a Weather Report concert where electric bassist Jaco Pastorius took him by storm.

Essix finished school and got a job with United Parcel Service. That lasted 11 years, during which time he also got married. Then, at age 29, he applied for and got a scholarship to Berklee College of Music. “I was very secure, making good money. I had to make a decision and say, hey, I’m going to walk away from this and basically go starve and live in a city 1,200 miles away from my home. I’d always wanted to go to Berklee, but didn’t have the courage to do it; you know, just pick up and move. But when I got the scholarship, I decided, this is not something you should just walk away from and pass up.”

Studio engineering degree in hand, Essix set about producing his own albums, of which Small Talk, his first for indie Zebra Records, is his seventh overall. Although his music is upbeat and geared for radio, who knows if he will get his fair share of “spins”? “I want people to hear the music,” he says. “If it turns into record sales, that’s a big plus.” He spends an average of 200 days a year on the road, and when at home keeps busy scoring local radio and TV commercials. But his ultimate goal, he says, is to become a film composer. He already has one film to his credit, the 1996 race relations documentary, Broken Ground.