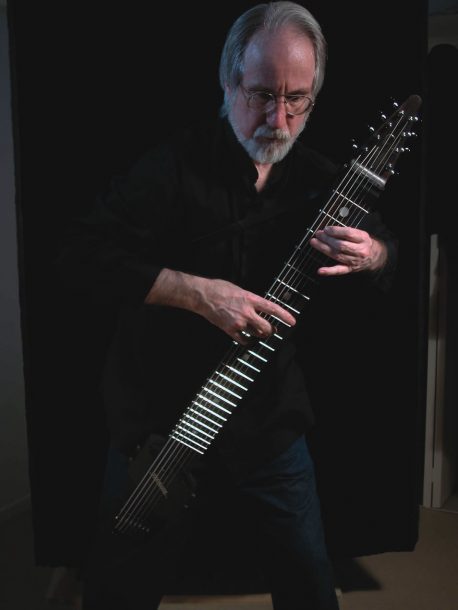 In the fall of 1974, Emmett Chapman appeared on the television show What’s My Line? while a panel of wisecracking celebrity guests attempted to guess what he did for a living. They couldn’t. “It broke everyone up, how the line of questioning went,” Chapman says. “They figured out that I had produced something artistic, that it produced sound. But then they went off in a different direction. They wondered if it produced little puffs of white smoke.”

What Chapman did then is what he still does-building and performing music on an instrument he invented, the Chapman Stick, which turned 30 last year. It’s been adopted by thousands of musicians and is in some respects an advance over its ancestor, the guitar. But if Chapman appeared with Stick on a resurrected What’s My Line tomorrow, he’d get the same jokes and blank looks.

In his pre-Stick years, Chapman played jazz guitar in California. As jazz guitarists go, he wasn’t all that atypical. He covered the standards, mixed in a few originals, admired Barney Kessel and Jimi Hendrix and followed Coltrane as far as he could (A Love Supreme, so not too bad). He also shared a gripe with a hundred thousand other jazz guitarists: He wondered why he couldn’t get the wide chords Bill Evans gets out of his piano. Most guitarists learn to live with it. Chapman decided to do something about it.

After a few years of fiddling with basic guitar design-mostly by adding strings-he discovered a technique very few guitarists had seriously considered up to that point. On an electric guitar, you can make perfectly audible sounds by turning up the volume and tapping on the guitar strings-that is, by striking the string above the fret and letting it ring as opposed to plucking it. This style of play obviates the need for a plucking or picking hand. Chapman’s right hand could play counter melodies on the other side of the fretboard, which he treated like a keyboard.

If Chapman had stopped there, he might have found a small place in the slight history of guitar players who tap-a distant, indirect ancestor to players like Eddie Van Halen and Stanley Clarke. Instead, Chapman recognized the guitar for what it was, an imperfect instrument for tapping, and designed an instrument better suited to his new technique.

Chapman could easily have named his invention “The Plank”-even in its modern, mostly standardized form, there’s really not much to it. The Stick comes in 8, 10 and 12 string models, and consists of little more than a long, wide, flat, fretboard, a headstock and a chunky pickup at the bottom. It’s held almost vertically, straps into your belt and hangs around your neck, and looks a little like a sci-fi dulcimer. In fact, a Stick painted gold with a gourd glued to the bottom appeared as a “baliset” in David Lynch’s film adaptation of Dune.

Stick players produce sound by striking the string against the fret. When played with a clean tone, the Stick makes a tangy, bright sound, like something between a guitar and a harpsichord. The instrument’s setup not only permits those broad chords Chapman pined after, it also lends itself to speed and precision. Not surprisingly, the instrument attracts technical players more interested in its flexibility and range, and less interested in the guitar’s image and rich history.

Chapman says it “confounds my mind” guitarists prefer old technology and equipment. “I guess musicians, guitarists and the like, want to identify with what’s already there and not have something radically new.”

Today, the Stick community is relatively small, but remarkably connected. They’re also open to modification in ways that guitarists, still happily buying copies of 1950s-era equipment, seldom are. Over the years, Chapman has rearranged tunings and string spacing. He’s changed the shape and the metal used in his frets. He’s substituted linear fret markers for the traditional white dots. And Stickists eat it up.

“They accept everything new that I implement,” Chapman says. “I changed some things I thought would really disturb people because I knew it would be better. And went for it.”

Thanks to the work of Tony Levin, a Stick player and bassist who joined King Crimson in the early ’80s and who performs with Peter Gabriel, the instrument has a modest profile in progressive rock. It’s almost invisible just about everywhere else. Tellingly, Chapman’s Web site, stick.com, includes advice for people interested in buying a stick who have never actually seen one in person. After 30 years of building and playing these things, Chapman still hopes to see his instrument gain some traction in the popular consciousness. But compete with the guitar? Nah.