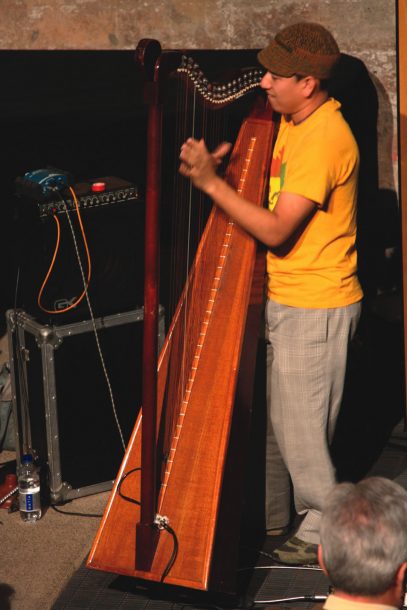 On New Year’s Eve 2005, Giovanni Hidalgo and the Mercadonegro Orchestra warmed up a cold night at an outdoor concert during the Umbria Jazz Winter festival in Orvieto, Italy. The audience was packed tightly into the Piazza del Capitano del Popolo, but Edmar Castaneda found enough room to step lively. His swinging hips and fancy footwork were so smooth that he gathered his own crowd, as well as several dance partners, all of whom wanted to cut it up with the short and handsome Colombian.

Several months later, it’s not surprising when Castaneda says, “I was a dancer for folk music” before he started playing the arpa llanera, aka the Colombian or Venezuelan harp. It’s one of the main instruments of joropo, a heavily syncopated form of music and dance in 3/4 and 6/8 time from the plains of Venezuela and Colombia. “The family of instruments for that kind of music has cuatro [a little guitar], maracas, some others, and I started playing those instruments, but never the harp [until I was 13],” he says. “I just started asking friends about the harp: ‘Can you teach me this exercise or this tune?’ and I just practiced a lot by myself. Maybe that’s why I play so different from the old people.”

Castaneda, 28, moved to the U.S. when he was 16, following his father, Pávelid, a pianist and harpist. “When I got to this country, I started to play in restaurants and started doing different kinds of music,” he says. “And then I went to college and studied trumpet; that’s when I started playing jazz in the big band. I transposed everything to the harp, and I don’t play the trumpet anymore.”

He need not bother with brass: Castaneda has revolutionized his string instrument, pushing the Colombian harp beyond folkloric music and into the complicated world of jazz. “It’s like the piano, but I only have the white keys,” Castaneda says. “It’s diatonic, not chromatic; that’s why a lot of people don’t try to do more with the instrument. I know its limits. I just imagine if I had all notes-wow!

“You do sharps by bending the strings, and you can tune the harp in modes. Little tricks,” he continues. “But classical harp? That’s what I’m studying right now. You have the black notes almost, because you have pedals and you can modulate easily. People don’t do that too much in classical harp; I’m gonna try to do that.”

Castaneda says he will perform live on his classical harp soon, but for now audiences will have to make due with the Colombian variety. It’s not a letdown: Castaneda makes the unwieldy instrument sing with his right-hand counterpoint melodies, groove with left-hand bass lines that are unheard of in Colombian harp music and shudder with flamenco-like chordal smashes and intense rhythmic plucking.

He literally has the world of Colombian jazz harp to himself.

“Edmar has a wider musical vision than most of his colleagues playing such a limited instrument,” says Cuban multireedist Paquito D’Rivera, with whom Castaneda has performed and recorded. “Every time I have a chance, I invite him to join my band and he steals my show. I hate that!” (D’Rivera’s Panamericana Ensemble, which includes Castaneda, recorded an album at Manchester Craftsmen’s Guild in Pittsburgh in March.)

Castaneda’s debut CD, Cuarto de Colores (available from edmarcastaneda.com and cdbaby.com), is a pan-Latin-jazz romp, from Cuba to Colombia, that features D’Rivera on two tracks as well as the multifaceted percussionist Dave Silliman and the great young trombonist Marshall Gilkes, both members of Castaneda’s working trio.

“Edmar can play the harp like a harp, but he can also play it like a full rhythm section,” Gilkes says. “He can create beautiful colors but also lay down complex montunos, which provide me with many options and ideas to build improvisations off of. There are very few instrumentalists who have the ability or means to play bass lines and comp at the same time. What is most incredible is that he continues his bass lines when soloing.”