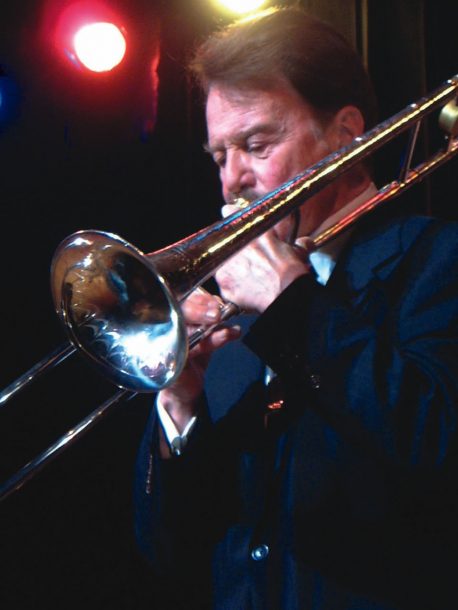 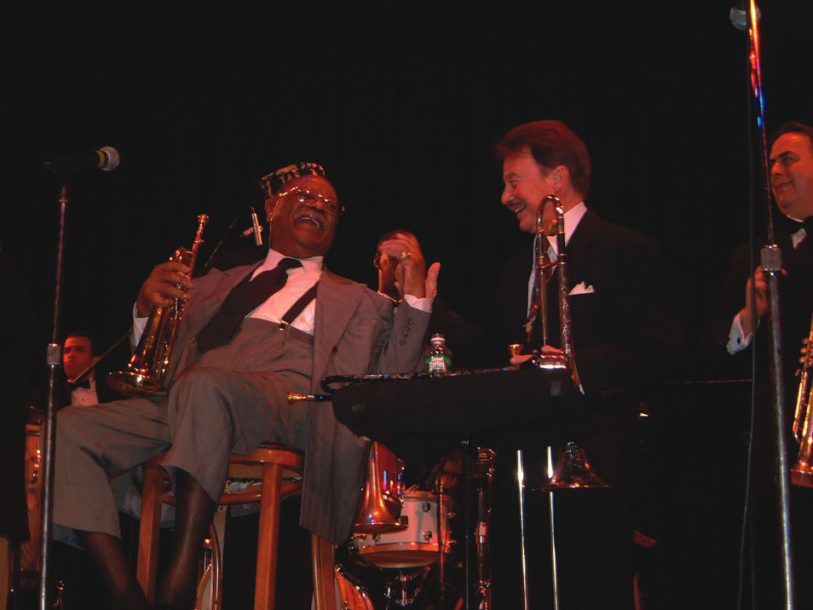 Clark Terry and Eddie Bert at the trombonist's 80th birthday party at Town Hall, May 16, 2002

Looking wiry and fit, 80-year-old trombonist Eddie Bert opened his own May 16 tribute/birthday concert at New York’s historic Town Hall, the site of his legendary gigs with Thelonious Monk (1959) and Charles Mingus (1962). Backed by the George Gee All-Star Jazz Orchestra, Bert soloed fluently on his own compositions as well as tunes associated with the many popular bands with which Bert worked in the swing era, including vintage charts associated with Red Norvo, Benny Goodman, Charlie Barnet, Woody Herman, Sauter-Finegan, Thad Jones-Mel Lewis and Stan Kenton.

Bert’s trademark trombone tone, then and now, emphasizes the higher partials, and he uses a unique combination of vertical and horizontal melodic elements in his improvisations. Along with J.J. Johnson, Kai Winding, Benny Green, Curtis Fuller, Slide Hampton, Jimmy Cleveland, Julian Priester, Frank Rosolino and Jimmy Knepper, Bert is one of the original bop trombone players.

The arc of Bert’s career is a familiar one among musicians of the World War II generation: from successful stints in big bands, to working in small groups, then prolific recording and television work, followed by years in Broadway pit orchestras and then diminishing opportunities as the jazz world lost its popular foothold and synthesizers and samplers became a common substitute for orchestras.

“[Back then] studios, theaters, clubs, hotels and every radio station had a staff band. It’s very bad now. I mean, there’s hardly any work,” Bert says. “I heard guys complaining all along. Things are really dumb, even in Europe. I talked to [pianist] Duke Jordan, ’cause it’s his birthday this year, too. You know, 80. And there’s hardly any work anywhere. It’s very bad.

“Being from New York, the bands were always around, you know, in theaters and hotels, and wherever they were playing, and you could go see them. And the personnel stayed consistent. Like, they would go on the road, come back, and it would be the same guys. So that’s why they got a sound; every band had a different sound, and a different personality. That doesn’t happen anymore, either, because bands don’t stay together,” the Loren Schoenberg Big Band trombonist says.

What may read like bitterness is actually truthfulness. Bert has always been one of the most even-tempered and objective musicians on the planet; when it comes to talking about his jazz life, bitterness is not in his nature. The trombonist has been around long enough to see the fortunes of the jazz world change from being popular music to a genre that’s but a blip on the radar to the average American. “It’s really a drag that people in America, they don’t know about jazz at all,” he says. “And it’s a language-we’re talking to each other. We converse with each other with the horns.”

Eddie Bert was born May 16, 1922, in Yonkers, N.Y. He lived in the Bronx until 1932, when his father, a former minor-league baseball player and telephone-company employee, moved the family to Mount Vernon, N.Y. After beginning on E-flat alto horn and bass drum, Bert switched to trombone in 1934 using a Wurlitzer “pea shooter” model with an all-brass slide that had to be kept lubed with bicycle oil. Somehow Bert was able to learn the rudiments on this less-than-ideal instrument, but it wasn’t until a couple of years later that he acquired a Martin student horn. (Although he has owned several instruments since then, Bert still used the mouthpiece that came with the Martin until the mid-1990s.)

Bert discovered jazz in his teenage years, and he began collecting 78-rpm records. He also recorded concerts and broadcasts on his phonograph, which had a disc-cutting arm and a built-in radio. In 1938 Bert went to the Famous Door nightclub in New York City seeking lessons from Count Basie Orchestra trombonist Benny Morton. He later also studied with trombonists Miff Mole and Trummy Young.

According to Bert, Morton knew “how to practice, and what to practice.” Practicing every day has become more crucial than ever for Bert, he says, because brass-players’ chops become less flexible with age. “It’s an everyday battle,” he says. “J.J. Johnson wrote an article once about that. He said, ‘You’re a slave to the horn,’ and all that, so he must have had to practice every day, too.”

Beginning in the late 1930s, Bert began to hang out and jam at such bygone jazz haunts as George’s, in Greenwich Village, where he met and befriended J.C. Higginbotham, the erstwhile trombone soloist of the Fletcher Henderson and Luis Russell organizations. By 1939, Bert had landed his first professional gig, with the Doug Moye Orchestra, a predominantly African-American band that worked in the North Bronx, New Rochelle and Larchmont, N.Y.

In 1940, Bert joined the band of former Gene Krupa tenor saxophonist Sam Donahue, whom he credits with teaching him to read music, and made his recorded debut with that group in December of that year. In 1942, xylophonist Red Norvo hired Bert for an engagement at the Famous Door, adding him to the front line of trumpeter Shorty Rogers and saxophonist/clarinetist Aaron Sachs. In 1943, after turning down an offer from Harry James-he wanted to keep playing jazz and considered James’ string-laden band too “schmaltzy”; he later turned down Tommy Dorsey for similar reasons-Bert joined Charlie Barnet’s band, a racially integrated group led by the independently wealthy alto saxophonist, who could afford to hire top talent.

“We played at the Park Central Hotel in New York, for about a month,” Bert says of the Barnet band. “And Dizzy used to come by, because Howard McGhee, Al Killian and all those guys were in the band-Dodo Marmarosa, Buddy DeFranco. And [Gillespie] would take us to his house, and show us all those changes and everything. He was great as a teacher. He was humorous and serious and just a great guy. He taught us a lot.”

Because he hopscotched from Barnet to Woody Herman to Stan Kenton to Benny Goodman and back to Barnet and so on, Bert encountered most of the outstanding musicians of his day. Not altogether surprisingly, Bert cites tenor saxophonist Lester Young as his biggest influence: “Because the tenor sax is in the same range as the trombone, and I like those ideas.” Bert once played a gig with trumpeter Al Porcino opposite Lester Young at the Band Box, and recalls, “At that point-it was the late ’50s-[Young] was on and off. But one night, I came down the stairs and the vibrations came up from the bottom, and I could feel that he was on. He was blowing that night. He was great.”

Bert credits his wife, Molly, with helping him to keep his career and life stable, despite all the myriad pressures of the jazz life. They have known each other since they were 13, and the two married in 1940 when they were both 18. Eddie and Molly have three daughters-Sharon, Jane and Laura-and when Bert needed a name for his own record label, he put their names together with his wife’s and came up with Molshajala Records.

Bert’s wife encouraged his formal education at a time when most musicians learned solely on the bandstand. “When I was going out with all different bands-I kept doing that until about ’51-[Molly] said, ‘Why don’t you go to school?’ So I went to Manhattan School of Music and got my bachelor’s, and my master’s in ’57. And at that time, Joe Wilder was in the school, John Lewis, Max Roach, Donald Byrd, John LaPorta. It was great. I even went on the road with Charlie Barnet, with a small band, up to Minneapolis, and they’d send my homework, and I’d send it back. So, they knew what was going on.”

The school connections resulted in plentiful studio dates for Bert, and they eventually led to a job on The Dick Cavett Show followed by 22 years in the pit orchestras of such Broadway productions as Bye Bye Birdie, How to Succeed in Business, Golden Boy with Sammy Davis Jr., Golden Rainbow with Steve Lawrence and Eydie Gorme and Ain’t Misbehavin’.

But it’s Bert’s jazz work that he should be best known for. His solos on “Jump Monk” and “All the Things You C” from 1955’s Mingus at the Bohemia (Debut) are classics, analyzed and studied by aspiring trombonists everywhere. Bert, who was named musician of the year in 1955 by Metronome, recorded with Coleman Hawkins twice in small-group settings-as heard on Jazz Tones (Xanadu/Prevue, 1954) and Cool Groove (Drive Archive, 1955)-and he played on the classic 1959 album The Thelonious Monk Orchestra at Town Hall (Riverside). Tapped by J.J. Johnson for his two-trombone group in 1954, Bert was forced to decline the offer since he was already signed to Discovery Records at the time; Kai Winding ended up getting the gig, and the rest is history. As luck would have it, Discovery went bankrupt shortly thereafter.

Bert hasn’t recorded much as a leader since the ’50s. Notable albums since then include 1987’s The Human Factor (Fresh Sound) and 1991’s Live at Birdland, which was tenor saxophonist J.R. Monterose’s final album. Bert’s latest release is 1999’s Live at Capozzoli’s (Woofy Records).

Most of Bert’s classic recordings from the 1950s and ’60s have been reissued, and he hopes Savoy will get around to releasing his 1954 LP Kaleidoscope on CD: “That was a working band I had with Duke Jordan, [bassist] Clyde Lombardi and [saxophonist] Vinnie Dean, and it’s a good example of what we were doing at that time.”

Bert’s CDs and records by other performers are what have sustained his love of the music over the years as the rock world grew, the jazz scene shrunk and he was no longer able to club- or theater-hop like he once did.

“I’ve got my collection of records, and I can always go back and hear what I want to hear,” he says. “Somebody came over to the house and said, to my wife, ‘Look at all those records. How’s he ever going to hear them all?’ So I said, ‘Well, if you go into the doctor’s office, you see all the books he’s got? Well, when he wants a certain thing, he knows how to pick it out.’ That’s what you have, you have choice.”

Eddie Bert is a choice trombonist.