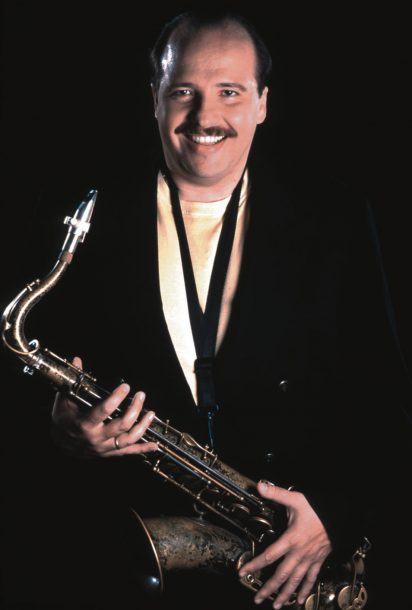 During the past 25 years, saxophonist Ed Calle has been heard on thousands of jazz, pop, and Latin recordings. He has performed and recorded with Gloria Estefan, Frank Sinatra, JulioIglesias, Jon Secada, and Bob James, as well as for film and TV.

He’s been featured on many of Arturo Sandoval’s Grammy-winning albums, including this year’s Hot House.

“I can play all styles of music, but I’m more of a jazzer,” says Calle, 39. “I feel a responsibility to the saxophoneand those who played it before me. I listened to Coltrane, Charlie Parker, Dizzy Gillespie, Joe Henderson, Sonny Rollins. They said a lot, and those of us who are doing it now have to keep studying, and hope that by the end of our careers we’ve added something other than being someonewho stands up and lifts his left shoulder a lot.”

Calle performs his own Latin-flavored contemporary-jazz compositions on Sunset Harbor, his debut album for Concord Records’ Vista label. He plays soprano, alto, and tenor saxes, also flute, EWI, and synthesizer bass on the album’s 11 tracks, one of which features Sandoval.

The Miami-based saxophonist was born in Venezuela and lived in Spain. Now, as he plays around the world, he says his goal is “to make music user-friendly, to entertain people and make them feel.

“My music is all about memorablemelodies. Somewhere along the line in jazz, we lost the sense of melody. I think it’s important for people to remember a melody after they hear it two or three times. I think smooth jazz is doing that for listeners of my generation,” he says.

“It’s our responsibility as instrumentalists to make the music user-friendly, without making it stupid with a drum loop and a two-chord progression that doesn’t make any sense. We’re the messengers, and if the message isn’t put in a way that people can consume it, they will just tune us out and turn on pop radio.”