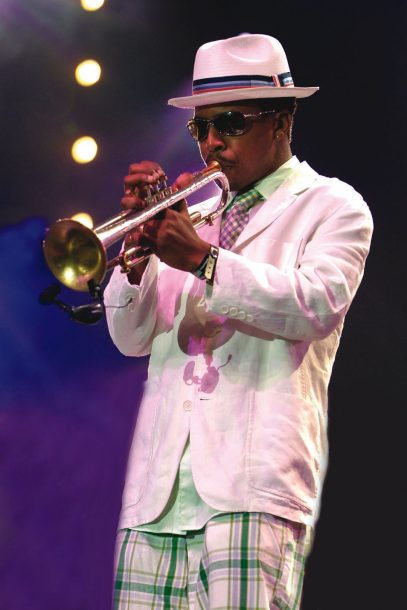 Roy Hargrove makes no bones about his desire to play jazz for lots of paying customers. And why not? We all want jazz to be heard by a large audience. But how does one attract that audience without resorting to pop music and merely slapping the jazz label on it? Who are the role models?

For Hargrove, the most pertinent examples are the early-’60s hard-bop records by Art Blakey and the Jazz Messengers when fellow trumpeter Freddie Hubbard was in the band and the early-’70s jazz-funk records Hubbard made for producer Creed Taylor. Both bodies of work feature top jazz musicians playing heady theme-and-variation improvisations, but they also feature strong, steady grooves and catchy melodic themes. That’s the blend Hargrove is going for on his new album Earfood.

One of the disc’s key tracks is Weldon Irvine Jr.’s “Mr. Clean,” taken from Hubbard’s 1971 album Straight Life. The central motif, a tricky R&B riff that could have come from the James Brown songbook, is again established in tandem by the trumpet and sax against a push-and-pull rhythm and then reconstructed and commented upon in solo after solo. This time, though, there are no electric keyboards, no electric guitar. Instead Hargrove leads an all-acoustic quintet-the same line-up as the Jazz Messengers: trumpet, sax, piano, bass, drums. This time the solos don’t sprawl until the track passes 13 minutes; instead Hargrove’s band keeps the solos focused and the tune under six minutes.

It’s actually an improvement on the Hubbard original. Hargrove’s soul-shout solo is every bit as good as his hero’s; drummer Montez Coleman is less shy than Jack DeJohnette about working the groove, and pianist Gerald Clayton’s Monk-does-funk fills are stronger than Herbie Hancock’s original noodling. Only someone who loved both Art Blakey and George Clinton could have made Hargrove’s version of “Mr. Clean.” The trumpeter sounds a lot more comfortable and convincing, though, on this jazz-funk project with a Jazz Messengers-like quintet than his awkward stabs at straight-ahead funk with his other band, the RH Factor. It turns out that Hargrove has a lot more in common with Hubbard than with Clinton’s Horny Horns.

An album of acoustic jazz based on 37-year-old rhythm patterns isn’t likely to pull in hordes of young listeners, but it should attract new listeners from Hargrove’s own generation, which will soon be turning 40 (the trumpeter himself turns 40 next year), old enough to want some more substantial music. These newcomers will go with the improvisational tangents if only jazz will meet them halfway by providing a beat they recognize and a tune they can remember.

That’s just what Hargrove provides on the new album’s opening track, “I’m Not So Sure.” Both the opening piano theme and the somewhat different but equally catchy two-horn theme are built atop an arresting rhythm pattern that lurches forward, hits the brakes, zooms ahead and brakes again. It sounds like one of those infectious soul-jazz tunes that Horace Silver wrote in the early ’60s but was in fact written more recently by Cedar Walton, who taught it to Hargrove at a Village Vanguard gig in 2000. Hargrove solos against the groove, murmuring a whisper, stretching out a note, pausing a measure and blasting out an accent. Clayton solos within the groove, delaying accents just enough to create tension until he snaps back into the pocket, though not necessarily with the expected chord.

Here’s proof that a dominant rhythm and strong melody don’t have to lock you into a pattern; they can be the reference points that you react to, the landscape that you alter by digging deep or building high. That’s true too of “The Stinger,” a Hargrove original that establishes a finger-snapping beat and a hum-along tune with the parallel horns in the head. Both the trumpeter and the pianist then mess with the theme by alternating vocal-like phrases and pauses over it. It’s just one of seven Hargrove compositions on the disc, and they all offer melodies and grooves sturdy enough for such wrestling.

Even the ballads work that way. “Divine,” for example, begins with a romantic melody full of longing sketched out by just the trumpet and piano. When the bass and brushes enter a minute later, Hargrove extends his phrases past the light but definite beat, creating a rhythmic tension in even this quiet number. Not just the rounded notes of the trumpet but also the splattered notes of the piano have a vocal quality-the phrases rise in the middle and fade at the end as if these instrumentalists were playing in complete sentences; they even pause regularly, as if for commas and periods.

This vocal approach to soloing is most evident on the two final tracks. Hargrove learned the Kurt Weill ballad “Speak Low” from Sarah Vaughan and he seems to croon the implied lyrics with his flugelhorn. The one concert recording on this otherwise studio project is a version of Sam Cooke’s gospel-soul standard, “Bring It on Home to Me.” The arrangement resembles Lester Bowie’s delirious remakes of old R&B tunes, where the horns shout out the ecstatic chorus over a hand-clapping beat until their very enthusiasm gets them speaking in tongues, like the jazzers they are.

Hargrove is playing as well as he ever has here. As he matures, he’s less worried about playing a million notes and more worried about singing seductively through his horn to a woman-or to an audience. Clayton has already learned the same lesson, and he emerges as a major talent on this project. He demonstrates that Monk’s tension-and-release shifts of emphasis can work on funk grooves as well as they worked on swing rhythms. Less impressive is alto saxophonist Justin Robinson, who too often takes the easy way out by racing through arpeggiated eighth notes on the chord changes instead of fashioning a vocal-like statement similar to his bandmates. Coleman the drummer is physically forceful but could use some subtlety, but Danton Boller is one of those rare bassists who can establish a melody and a groove at the same time, as he does on his introduction to “Strasbourg/St. Denis.”

Hargrove deserves credit for recording this entire album with his regular road band. He could have rounded up the usual all-stars and cut these tunes with little rehearsal; he would have wound up with some hotter solos but less interaction and less cohesion. By investing in his bandmates, he’s preparing for the day three years from now when they will make a live album with many of these same tunes and the same interplay but with much stronger solos. These compositions will deserve that treatment, for they welcome the listener with easy-to-grasp but impossible-to-exhaust tunes and grooves. For this is not pop-jazz; this is populist-jazz. This is not ear candy; this is Earfood.