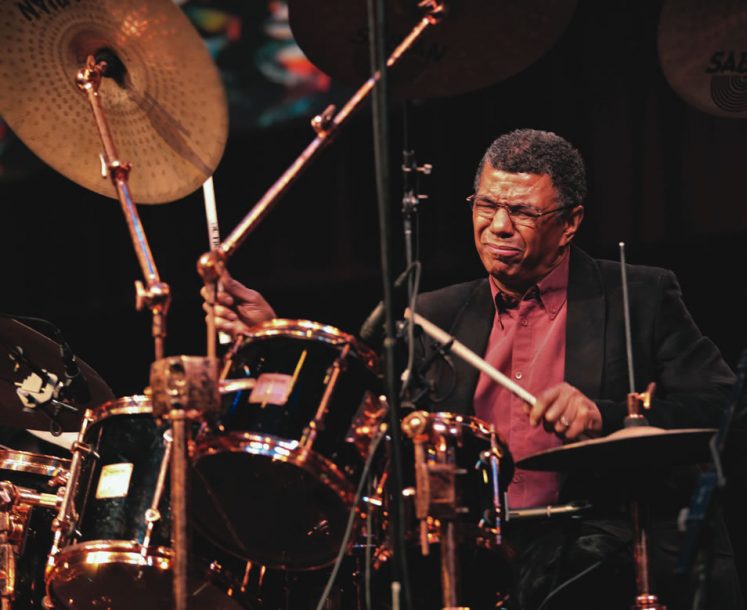 Within the 300-plus events comprising this year’s Vancouver International Jazz Festival, there were strands of programming that could be followed through the traditionally 10-day festival (stretched to 11 this year for Canada Day celebrations), yielding a wealth of information about the current state of a subgenre or a fundamental ensemble configuration. Such was the case with a series of duo concerts.

If, as the Canadian critic Barry Tepperman once wrote, that solo concerts are like walking a tightrope without a net, then duets are like two walkers approaching each other from opposite ends of the tightrope. One false move by either, and they both fall. Luckily, there were no fatalities this year. There were a few close calls, however, and not all of them were intended.

When jazz artists tour in support of an album, it is assumed that they will slip in just enough of it to provide cover with the label, which in some instances are springing for local print media ads and priming local media. For the most part, however, they spend the bulk of the program on new materials. However, John Surman and Jack DeJohnette came far closer to replicating their latest ECM recording, Invisible Nature, than one would expect from improvisers of their caliber. The saving grace of their opening night concert at the Vogue Theater, which was plagued by house sound levels more appropriate for the New Groove Series held a block away at the Commodore Ballroom, was the relish with which they volleyed throughout the set, especially when their banter pushed against the grain of Surman’s atmospheric synth washes and mega bass figures.

The partnership between Surman and DeJohnette is often touted as a 35-year association, as if longevity alone is justification for its continuation. However, particularly when the multireedist turns to the baritone and DeJohnette has the latitude to shift the rhythmic feel or spike the intensity at a moment’s notice, it was compelling one-on-one play. The set was not without its welcomed surprises, either, particularly an acoustic piece matching Surman’s bass clarinet with DeJohnette’s piano. On disc, DeJohnette demonstrates facility and dexterity as the keyboard, but doesn’t create a lot of empathy. Strategically placed as the set’s closer, this quasi-lilting, semisweet ballad gave DeJohnette to shine lyrically. It also left the crowd wanting more, and Surman and DeJohnette responded, with a thick slice of whole grain ’70s funk with plenty of jam.

It would have been interesting to hear Surman and DeJohnette at the Western Front, a far more intimate, yet austere loftlike space that attracts the most qualified segment of the Vancouver audience, discerning folks who clearly knew and wanted pianist Marilyn Lerner and cellist Peggy Lee’s chamber jazz-tinged brand of improvised music. Lerner and Lee are two of Canada’s most classically gifted improvisers, and their bearing, if not their materials, conveyed extensive conservatory training. Both employ an impressive array of extended techniques with well-articulated results. Yet virtuosic listening was crucial to the unfolding of the concert, as Lerner and Lee continuously afforded each other the space to essay extensively or let a luminous phrase hover unexplained. It was necessary ballast between Lerner’s incisive distillation of mid-century classicism, Crumblike manipulations of the strings and advanced jazz, and Lee’s striking arco and pizzicato techniques (many of which yielded decidedly non-Western textures), allowing moments of vigorous physicality and deep lyricism to coalesce gracefully.

The double bill of duos at the Vancouver East Cultural Center provided the most extensive seminar of the series. Pianist Marilyn Crispell and saxophonist Lotte Anker immediately asserted a compelling emotional intelligence in a program of Anker’s compositions. Almost as quickly, the tug between Anker’s knowing cool and Crispell’s heart-on-sleeve warmth shaped the music as much as the materials. The gravity of Anker’s music drew upon the folkish contours and classicism of Scandinavian jazz, but forgoes its dead-end melancholy. Anker’s compositions not only tap Crispell’s lyricism but the rigorously edged aspect of her playing that is only approximated with the term, “post-Taylor.” Anker has similar attributes in her work on soprano and tenor, buttressed by a strong sound on both horns. Additionally, she has a deft sense of pacing, not only in terms of building a set, compositionally, but in saving her most visceral tenor playing to the end, maximizing its impact. In the process, Anker and Crispell bypassed erudition and found something both wise and endearing. Conversely, clarinetist Gianluigi Trovesi and accordionist Gianni Coscia used predominantly Italian folk forms to create wonderfully sentimental and humorous music.

Their precision, particularly at precariously fast tempi, is frequently astonishing. Intriguingly, their rhythmic finesse is central to how they distill the laughter and sighs embedded in broad, melodramatic melodies. Turnarounds, pick up notes and concluding themes are often oversized and laugh-out-loud funny. Elsewhere, their attack is supple and even impish. With every aside and jape, Trovesi and Coscia created the score for running away with the circus, wandering the countryside, or letting the evening slip into night. Their music is a balm.

The toughest crowd at the Vancouver festival is the lunch bunch at Market Stage on Granville Island, a gem of a tourist magnet. The venue periodically requires provocative improvisers like Shock Exchange. Notables among a growing wave of emergent London improvisers who did not enter improvised music through jazz, alto saxophonist Caroline Kraabel and bassist John Edwards thrived on the challenge of an audience peppered with Shriners sporting fezzes and a mob of gulls pecking about the stage. Kraabel demonstrated a well-developed approach to blending voice and saxophone in flowing cadences of contrasting textures. Edwards had engaging approaches of using timbre to create forward rhythmic motion. Subsequently, there was a brisk pace to their improvisations; coupled with their intense focus, one at least partially driven by playing outdoors without benefit of stage monitors, it kept their edge clean and sharp. Even though they darted from zone to zone, the set-long performances had a sure-footed continuity attributable to their eight years as Shock Exchange. The fact that Kraabel and Edwards adapted so well to the Granville Island scene is also due to their collaboration as the parents of an infant son, Clement. In that regard, they were just another family out at lunch.