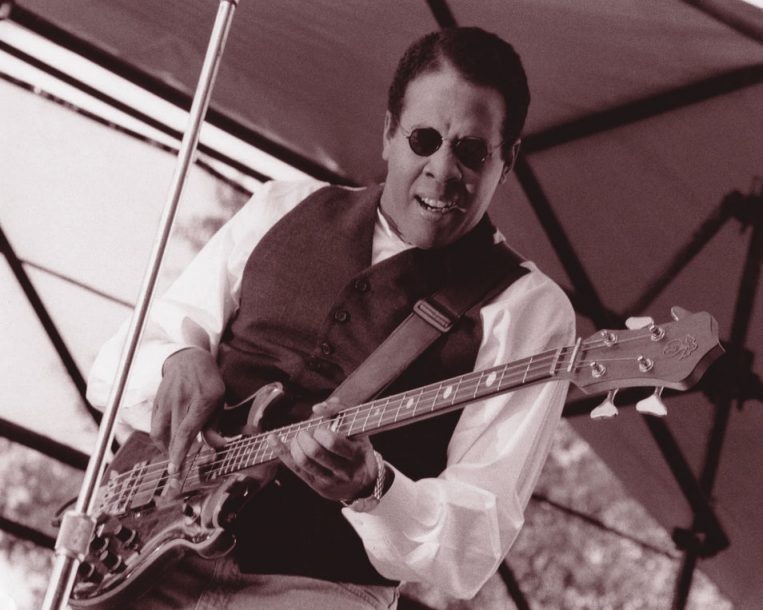 How much bottom can you handle? Anyone starved for low-end dynamics would have felt like they had made it to heaven at Stanley Clarke’s Scholarship Fund benefit concert. The benefit was for the students at the Musicians Institute in Hollywood, where the concert was held. A high-point of the show featured ten different bassists playing with Clarke for a take-no-prisoners version of his ever-popular fusion hit “School Days.” Bunny Brunel, Brian Bromberg, Stuart Hamm, Billy Sheehan, Armand Sabal Leco, Wayman Tisdale, Flea, Jimmy Johnson, Alex Howell, and Marcus Miller were the accompanying players with Ndugu Chandler and Stewart Copeland on drums and Nick Smith playing keyboards.

Basically the mega-jam was a show of friendly one-upsmanship. Since it was the former Return to Forever bassist’s show, he was the clear-cut winner. Just the same, noteworthy moments came from Sheehan (being the aggressive, off-the-wall rocker he is), Johnson, who played succulently sweet lines, and a melodic Tisdale. Bromberg, by way of effects, sounded like a lead guitarist. And Miller drew strong audience reactions from his interactions with Clarke.

Throughout the three hour event, now in its third year and subtitled “A Celebration of Black Music and Film-Stanley Clarke,” there was plenty to applaud. But what proved to be the absolute showstopper was a surprise appearance by Stevie Wonder. With Clarke on acoustic bass, violinist Karen Briggs, and Chandler, the singing/keyboard marvel rendered a version of “Overjoyed,” which melted audience members’ hearts. After establishing the song he jumped into “Giant Steps,” and a B.B. King medley, then returned to “Overjoyed.” It was a wild ride, but the accompanying musicians were up for it. Both the band and Wonder deserved the standing ovation they received afterward.

Overall, Clarke performed in numerous configurations with a cavalcade of players, and started things off with a hard-hitting fusion tune from 1981’s Clarke/Duke Project record. Backing him at that juncture were keyboardists Mark Stevens and Nick Smith, drummers Rayford Griffin and Gerry Brown and bassist Leco. Revving things up a little, a horn section consisting of two trumpets, trombone, baritone and soprano saxophone joined them for a rousing version of Charles Mingus’ “Goodbye Pork-Pie Hat.” It unquestionably smoked and Clarke soloed on upright bass like a man possessed.

Even hotter playing came from a R&B fueled jam featuring percussionist Sheila E., bassist Flea, guitarist Paul Jackson, Jr., Copeland, Briggs, Griffin, keyboardist Rodney Franklin and the horn section. It got raucous when Copeland and Sheila E. got into a scrimmage of sorts. The crowd loved every minute of it and clapped along. When all was said and done, Sheila E. was the victor, and Clarke yelled “girl power.” It was definitely a memorable moment.

For comic relief, Sinbad took care of the emcee duties and got lots of laughs, especially when he admitted that he originally wanted to be a drummer and play for Earth, Wind and Fire. When Clarke returned to the stage, he showcased the softer side of his repertoire with banjo whiz Bela Fleck and Briggs for “Song to John (Coltrane).” Additionally, he did a dazzling Miles Davis mainstream piece with trumpeter Wallace Roney pianist Patrice Rushen and drummer Lenny White. Their appearance was quick compared to others’, due to the backup trio having to dash off to Catalina’s for their own show.

Clarke also got down to business and gave out three scholarship awards to students (of which there were many in the audience). Clarke proclaimed that the benefit was what the show was really all about and if wasn’t for a scholarship he once received, he wouldn’t be where he is. That led to the final part of the concert, which featured the bassist accompanied by a thirty-piece string section along with harp, two guitarists and two drummers playing music from his film-score work. Clips from movies such as Boyz in the Hood, Poetic Justice, and What’s Love Got to do With It were shown on monitors, along with an intro featuring Quincy Jones.

Clarke soared with the complement of the strings and everything sounded incredible. The last number featured just Clarke and strings, with the audience eagerly anticipating his performance. However, as he began to pluck away on his bass, his fret hand gave way. It was a strange moment-but the bassist handled it with true dignity and said he couldn’t play anymore. The concert ended on a rather disheartening note, but Miller quickly leapt to the stage to console Clarke.