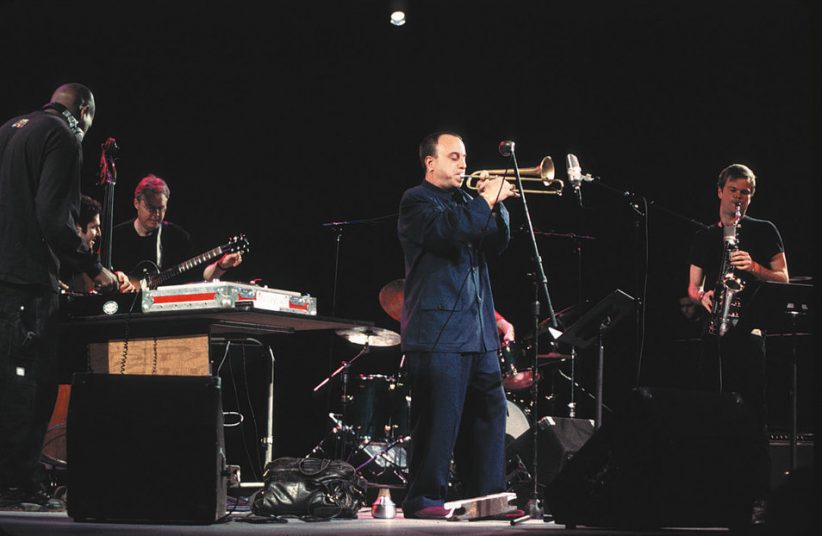 This tribute to “the quiet Beatle,” who would ultimately become known as “the metaphysical Beatle” for his deep and abiding passion for Eastern culture and philosophy, was far more than just another bunch of jazzbos “having their way” with the Beatles songbook. The participants in this event–one of many in the weeklong New York Guitar Festival–all came of age with the Beatles’ music. It affected them as profoundly at the early stages of their development as the music of Miles, Monk, Mingus and Trane would later on. So rather than addressing Harrison’s oeuvre condescendingly, as a previous generation of jazz musicians had already done on a number of half-hearted cover recordings from the ’60s and ’70s, these 40-something artists embraced Harrison’s legacy with the kind of reverence that comes from having a personal connection to the music.

Austrian guitarist Wolfgang Muthspiel, a Berklee College of Music alumni who also played in Paul Motian’s Electric Bebop Band, opened the evening (which was taped for later broadcast as part of hot John Schaefer’s New Sounds show on radio station WNYC) with an intimate solo guitar recital. The Vienna native exhibited stunning virtuosity on an oddball bodiless guitar, fingerpicking with uncanny precision on Harrison’s two most famous tunes, “Something” and “My Sweet Lord,” as if they were Bach lute exercises. Throughout his set, Muthspiel used outrageous stretches on the fretboard and took great harmonic liberties with the material, also relying on minimal looping for rhythm guitar parts. Given the depth of musicality and dazzling chops that Muthspiel brought to bear on Harrison’s music, it was somehow touching that he played Harrison’s original signature solo on “My Sweet Lord” note-for-note, leaving the sweetness and simplicity of that perfect melodic nugget intact.

Sex Mob, that bunch of musical upstarts led by trumpeter Steven Bernstein and including drummer Kenny Wollesen, alto saxophonist Briggan Krauss and on this night bassist Brad Jones subbing for Tony Scherr, has made a career out of deconstructing, revamping and otherwise tweaking familiar pop tunes (as on their latest release, Sex Mob Does Bond). A charismatic presence as bandleader, Bernstein shapes the music as it goes along by dramatically conducting the proceedings in impromptu fashion, à la Sun Ra or Miles Davis. With special guest guitarist David Tronzo in tow for this NY Guitar Festival event, Bernstein had some added meat (and a volatile soloist to boot) for his clever suite of derangements of familiar Harrisongs. Sex Mob opened with a wildly cacophonous rendition of “Beware of Darkness,” which Bernstein slowed to a funeral march tempo and carried himself on slide trumpet. This dynamic opener segued neatly to an ethereal, rubato rendition of Harrison’s haunting “Blue Jay Way,” buoyed by Wollesen’s brisk free-drumming approach, and then into a rowdy shuffle version of “Dark Horse,” on which the slide guitar marvel Tronzo erupted with mad, kinetic abandon. Bernstein delved into “Wah Wah” with an arranger’s glee, pumping up the inherent dissonant chordal voicings ten-fold while once again unleashing Tronzo like Dr. Frankenstein turning the monster loose. With Bernstein brandishing a plunger on his slide trumpet, Sex Mob closed out their portion of the show with a gorgeous reading of Harrison’s delicate waltz from the white album, “It’s Been a Long, Long, Long Time,” underscored by Wollesen’s ultrasensitive brushwork.

Guitarist-composer Joel Harrison, a fairly recent transplant to New York from the Bay Area, explored the Indian influence in some of Harrison’s music with a sextet that included accordionist Tony Cedras, bassist Stephan Crump, drummer Dan Weiss, percussionist Todd Isler and special guest saxophonist Dave Liebman. After unveiling his own soulful, Boz Scaggs-like vocals on the melancholy ballad “Isn’t It a Pity,” Harrison engaged in fierce call-and-response with Liebman’s shenai-like soprano work on the saxophonist’s inventive arrangement of “Within You, Without You,” which was underscored by Weiss’s authentic tabla playing and Cedras’ accordion drone. Harrison’s expansive take on “Here Comes the Sun” involved some ambitious reharmonizing and halftime melodic lines layered on top of a percolating Indian groove along with some heroic tenor work from Liebman. Vocalist Jen Chapin joined the ensemble for a beautiful rendition of “All Things Must Past” with Harrison on slide guitar and Liebman on tenor. Their treatment built to a furious peak with Liebman’s intensely cathartic tenor solo, then release came in the form of Chapin’s gentle voice returning to the melody.

Guitarist Vernon Reid, perhaps the most rock-oriented artist on the bill, made no attempt at “jazzing up” George but dealt with Harrison’s music on its own terms. His special edition for the evening included Jared Nickerson on bass, Marlon Browden on drums, Leon Gruenbaum on keyboards, Suphala on tabla and Richard Barone on vocals. Barone, the former frontman for the alternative pop group the Bongos, brought his own unique brand of pizzazz to the proceedings. With bleached blonde hair, Austin Powers-type specs and fabulous sharkskin suit, he was clearly of the pop world, as opposed to the rest of the performers on the bill (save Living Color founder Reid) who have spent most of their careers working on the fringe in hip underground jazz venues. But from Barone’s genuinely passionate delivery on “Give Me Love,” it was also clear that he was a huge Beatles fan. Throughout Reid’s set, the allusions to Jimi Hendrix were quite obvious, particularly on his groove-heavy, wah-wah inflected, Band of Gypsies-styled take on “Living in the Material World” and his heavy duty version of “Think for Yourself,” which came across like Hendrix’s “Fire.” Reid also resurrected perhaps the most obscure Harrison tune of the evening in “Here Comes the Moon,” another Eastern-flavored vehicle that had him playing slide guitar over a droning pulse and some incendiary tabla work by special guest TBA.

While George Harrison is remembered as a strong ensemble guitarist and uniquely melodic soloist–a sweet counterpart to Keith Richard’s nastier role in the Rolling Stones–this evening reminded those in attendance of Harrison’s contributions as a thoughtful lyricist, deep composer and world-music pioneer.