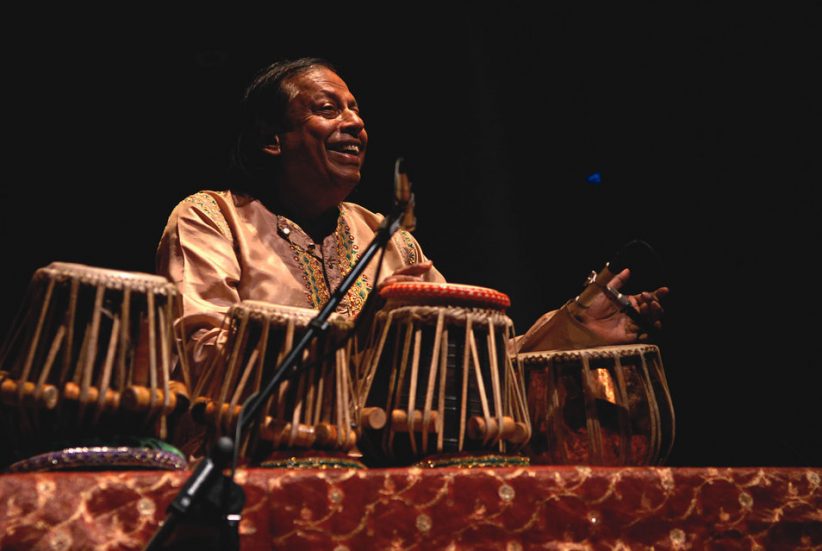 Fusion became a curse word when Miles Davis recorded Bitches Brew in 1969. The album insulted critics, angered parents and encouraged schoolchildren to try cigarettes and wear headbands–allegedly. Miles offended again in 1972 when he recorded On the Corner, a funk album that combines whistles, bells, hand claps and keyboard smears in a shoulder-shrug dismissal of almost all mainstream musical convention.

Five Miles-alumni and one admirer paid powerful tribute to On the Corner at Yoshi’s in Oakland during two days of high-energy funk and Miles-inspired mayhem. Bassist Michael Henderson led Children on the Corner, a tribute band featuring saxophonist Sonny Fortune, keyboardist Michael Wolff, drummer Ndugu Chancler, percussionist Badal Roy, guitarist Barry Finnerty, complete with the musical rough edges that Miles used to pay musicians not to smooth out. Transitions between solos were less than seamless, but more than appropriate in a funk band that rehearsed only once and holds loose improvisation at the same premium Miles did in 1972.

The group’s most exciting performer was, by far, Ndugu Chancler. The percussionist’s punch-in-the-face solos and infectious body jerks did all but knock audience members out of their seats and their spicy tuna off its rice. Unlike fussy drummers who smack everything in sight, Chancler’s has a keen sense of timing to know when and how to smack what. The drummer dropped a series of hip-hop bombs that put even the most nervous bebop beats to shame.

In sharp contrast to Chancler’s forceful drumming style, Roy caressed the tablas with the sort of unnerving precision and scary syncopation that he added to On the Corner. Roy’s performance at Yoshi’s included a call-and-response session between he and an Oakland train conductor whose deafening whistle entered Yoshi’s at precisely the percussionist’s most precious moment. Roy incorporated the whistle into his playing in a true improvisational manner, and as the audience broke into laughter his game face broke into a youthful smile that infected all of ours.

Dotting the evenings’ excitement, however, was Michael Wolff’s lack of it. His playing reached for a battery-acid sound that John Medeski comes close to, but that mood pianists like Wolff spend choruses trying unsuccessfully to muster. Wolff’s attempts at Hammond heroics fell on attentive ears, but ultimately short of the pianist’s agenda. His solos discovered their intentions late into choruses and without the sense of revelation that lengthy organ solos tend ultimately to achieve. Wolff seduces listeners with sophisticated storytelling that deserves candlelight but not center stage in a funky tribute-band.

Wolff opened the second night’s second set with a broodingly introspective piano solo that carried audience members into states of hypnosis, but the magic faded as he began shouting instructions to bandmates and chanting over his solos-a lot of high-flying theatrics from a cocktail pianist with an impeccable sense of melody but minimal sense of groove. Wolff will, and should, remain in the band during its five-week national tour, but could profit from listening again to On the Corner to rediscover what Hancock and Corea had in mind. Wolff can then disagree with, reinterpret or retreat from what he discovers, but he must first rediscover it.

When Michael Henderson passed around the signup sheet for frontman, Sonny Fortune must have been elsewhere practicing. Fortune is the band’s most talented musician but, ironically, its least featured soloist. He became an alto icon in the 1960s as a bandmate with Elvin Jones and McCoy Tyner, and can still turn on a dime from lean soloing to belching harmonizing without a trace of effort. His power at Yoshi’s was there, but inconsistent-a case not of admirable restraint for sharing spotlights with others in the band, but of stubborn humility for not taking control of a funk band with his name on it.

Overall, the group enjoyed trading fours, solos and laughs in a roomful of sushi-sucking, funk-loving 30-somethings with obvious good looks and entire bank accounts of sake on their tables. With Directions in Music-ers Herbie Hancock, Michael Brecker and Roy Hargrove signing final autographs as their own Miles-tribute tour comes to a close, Children on the Corner becomes the newest band to bear Miles’ personnel, album name and implied stamp of approval. The group’s rotating lineup matches Miles’, and the funk reeks just as much. But what’s hard not to lose in translation from then to now is the reckless abandon and outlandish defiance that we find so endearing about the trumpeter. For that, we have only his records, autobiography, biographies, photographs, countless interviews and everything else on the Internet.

Look for Children on the Corner’s live recording on Sonance Records in mid-September.