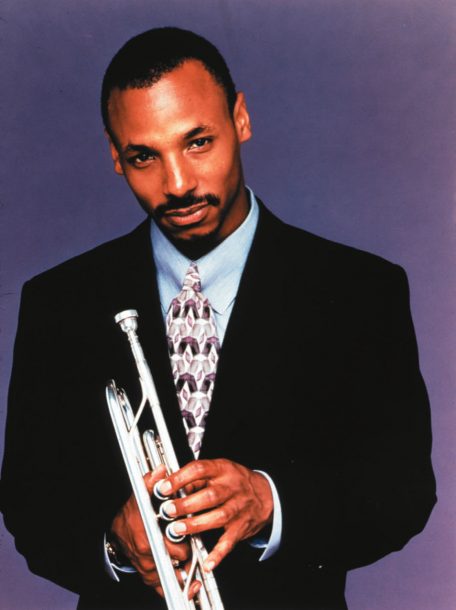 Trumpeter Duane Eubanks is getting very close to nailing down his own style of play, but it’s a process that he regards as a “never-ending challenge.”

“A lot of trumpet players today use the same approach,” he says, “which is kind of a strong, Freddie Hubbard style. Freddie has influenced everybody, of course, but I’m after something different.”

The sound that Eubanks projects is personal, warm, and sonorous-almost bringing the flugelhorn to mind. Originally from Philadelphia, Eubanks cites Lee Morgan as his main inspiration, with Miles Davis and Blue Mitchell added to the mix.

“The way that Miles used space is a very difficult concept to master,” he said. “It may be easy to picture and imagine, but to actually do it is something else, especially when I’m in a situation where everyone is playing and there’s all this fire behind me; it’s incredibly hard to hold back.”

Eubanks, the brother of Robin and Kevin, has released his first recording as a leader, My Shining Hour, on the TCB label, a project that producer Aleardo Buzzi offered the 30-year-old after he appeared on a recording with brother Robin. “I was really nervous about it,” he recalls, “but you can’t turn down opportunities like this.”

Being a leader is “a new ballgame” for Eubanks, but he credits his time playing with the Illinois Jacquet Big Band and gigs with people like Lionel Hampton and Oliver Lake as great preparation for taking the reins of his own group.

He admits that the Eubanks name has opened doors for him, but he says he’d never use it as a crutch. “I don’t tell anybody my last name unless they ask,” he says. “But it does get people to listen; they say ‘There’s another Eubanks, let’s hear what he can do!'”