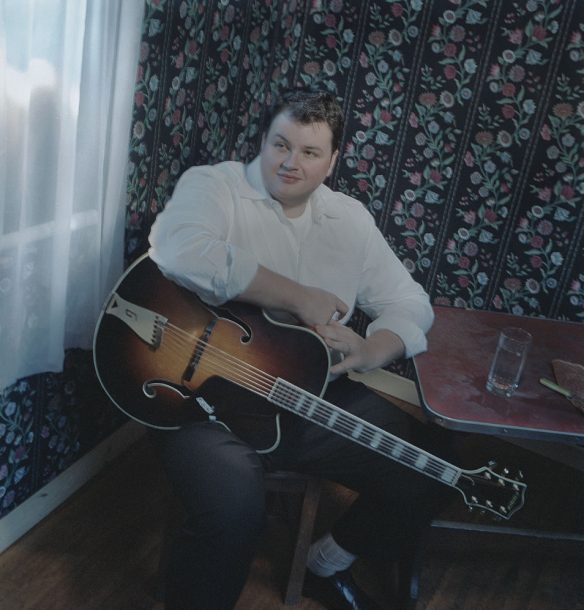 “People hear the word ‘country,'” muses Doug Wamble, “and they don’t understand that country is not about the music. It’s about the fact that I’m just country. I cook country food, I wear country clothes sometimes and my family is culturally Southern.”

Wamble (pronounced “WOM-bull”) has just played a set at New York City’s Jazz Standard with Steven Bernstein’s Millennial Territory Orchestra, and his featured song in the first set was a swaggering vocal take on Stevie Wonder’s “Signed, Sealed, Delivered, I’m Yours”; in the second set he’ll croon “You’se a Viper,” a hoary ode to marijuana by violinist Stuff Smith. On the whole, the gig is a perfect showcase for the guitarist-singer’s expansive musical worldview-even if his own sensibilities, as captured on the impressive debut effort Country Libations (Marsalis Music), hew closer to down-home than downtown.

“This record is kind of about my love of Ornette Coleman’s music, just from a rhythm section concept,” Wamble explains. “Then there’s the element of Robert Johnson. And then the third thing this record is drawing from is gospel music; that’s a big thing for me.” Country Libations does in fact convey all of these influences, in a manner as organic and free-flowing as the mighty Mississippi. “Back to the River,” with its poignant church cadence, makes the case convincingly. Elsewhere on the album, Wamble confidently delivers keening blues (“Ain’t Quite Four This Morning”), harmolodic swing (“Dim Tangy Tennessee Twang”) and folk-country fare (“If I Fall”). The constants throughout the disc are Wamble’s razor-sharp yet honey-sweet baritone; the bluesy tone of his vintage hollow-body Gretsch guitar, recorded without a pickup; the tuneful quality of his original compositions; and the easygoing cohesion of a working ensemble. Wamble notes, however, that Country Libations is just the first of many statements; other projects include an octet “inspired by Ellington and Mingus, and Wynton’s longer-form things” and a quartet “that’s really Ornette- and Branford- and Keith Jarrett-influenced.”

Wamble spent his Memphis youth captivated by music. He studied jazz at Memphis State University and then the University of North Florida, where he met his band: pianist Roy Dunlap, drummer Peter Miles and bassist Jeff Hanley. In 1997, having earned a master’s degree at Northwestern, Wamble moved to New York, where he soon found work with Wynton Marsalis and Cassandra Wilson. Those contemporary legends were two of Wamble’s primary heroes because of their Southern roots and their grasp of jazz tradition in the broadest sense. “I find that the people that I love to listen to today are people who have assimilated the entire history of this music.”