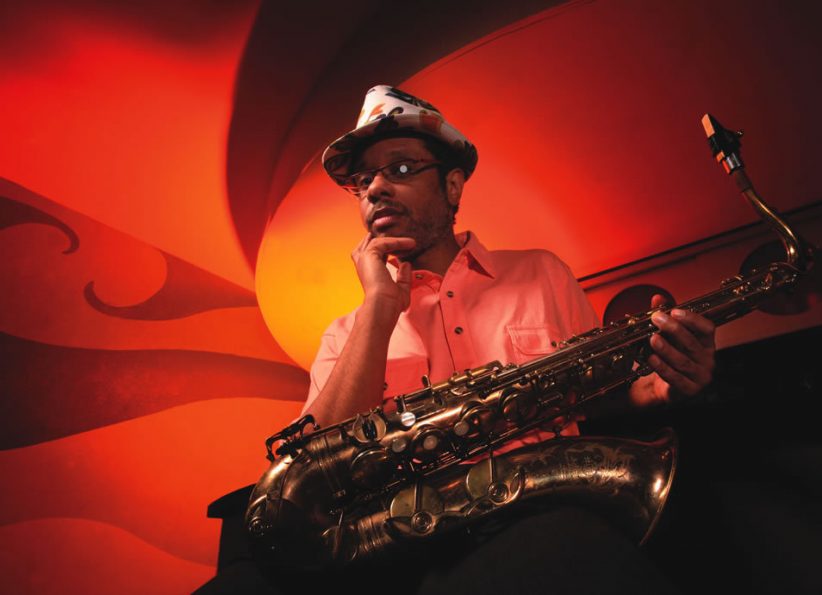 Junior Walker tends to be dismissed as a mere footnote by popular musical historians as the man behind a couple of mid-’60s hits that still play on oldies stations. At a time when urbane black pop ruled the charts, Walker was Motown’s de facto chitlin’ soul artist, but with a catch-combining top-shelf tenor playing with a roughhewn vocal style to match, Walker was the rare artist responsible for his own call-and-response dialogues. And if it was uptempo and raucous you wanted, you looked no further than Autry “Junior Walker” and his All Stars, whether you were Sly Stone, Maceo Parker or Pharoah Sanders.

Do the Boomerang: The Music of Junior Walker is Don Byron’s sixth Blue Note album and first extended studio outing on tenor saxophone. That Byron would choose to cover 11 Walker numbers-in addition to James Brown’s “There It Is”-provides yet another testimonial to the enduring influence of our earliest musical impressions-Saturdays at the Apollo in Harlem proving especially indelible for Byron.

“Where we lived in the Bronx was maybe five or six stops from there,” Byron says. “Back then, when you went to the Apollo, you stayed the whole day. You’d see one band play two or three sets; you’d see movies in between. My mom liked all the Motown stuff. She took me to see Leonard Bernstein, too. But at the Apollo you could see James Brown and Junior Walker on the same bill.”

Do the Boomerang has that same sense of wonder. A catchall label like “soul” could barely hold Walker, and jumping from “Satan’s Blues” to “What Does It Take (to Win Your Love)” to “Pucker Up, Buttercup”-a grinding R&B instrumental, a plangent love ballad and a bubblegum confection, respectively-one gets a sense of how skillfully Walker could subvert one genre with another. This is American pop music at its best, as melting-pot art. All of which, Byron insists, is founded on a music entirely less secular.

“Soul music back then was about people who had gospel backgrounds, harnessing the things that they learned in the church so that they could use it outside the church to make people dance,” Byron says. “Walker’s sound is about gospel technique; it’s about the way gospel singers sing. That’s one of the main things I’ve been looking at for the last 10 years: how being a worshipper and a preacher comes together in the music.” And there you have the essence of Walker’s particular soul music, a mixture of nearly over-the-top fervor with musical exactitude: one strain evinced by Walker’s sheer freneticism-with horn or voice-the other in the syncopated precision of a track like “(I’m a) Roadrunner,” Walker’s appropriation of Big Bill Broonzy’s wise directive to “hit the right lick.”

Byron and his crew, for the most part, do just that. George Colligan cuts some massive, swirling shapes on his Hammond organ, and the rest of the band simply rides the groove, drummer Rodney Holmes picking up any slack. Strangely, Walker’s music sounds even more informal here than in its more familiar incarnations on those hit 45s. Byron’s solo on “Satan’s Blues” is a great mélange: Eddie Harris licks, a trace of Arnett Cobb, more than a little Junior Walker and a nod to the wide tone of Hank Mobley a blend of hard bop, Memphis soul, New Orleans funk, outright pop and Chicago electric blues. Or, if you prefer, everything that Junior Walker sprang from and everything that Junior Walker was about.

“If you want to pay tribute to something, maybe you start with a phrase that the person originally played. On a tune like ‘Shotgun,’ I just couldn’t not start with the phrase that Junior Walker played. It’s a part of the history,” Byron says. “But for the most part I’m not really playing like him. I’m thinking about Stanley Turrentine, Harris, Cobb, people like that.” What results then is one musician delving into the aspects of the tradition of another-not a direct homage, per se, so much as a tribute to Walker’s own broad-minded sensibilities.

Byron has played with these musicians before-Curtis Fowlkes on trombone, Brad Jones on bass, David Gilmore on guitar and Dean Bowman on vocals, in addition to Colligan and Bowman-but it is the presence of one new musician that best exemplifies Walker’s debt to the blues, and with that Motown’s debt to the church. Chris Thomas King sings on four tracks, having made the gig just after the passing of his mother and after Hurricane Katrina ripped through his home in New Orleans.

“It was a very bluesy thing,” King says. “In those songs and those arrangements, I was surprised how contemporary they sound today. As a contemporary blues artist, that was a little surprising to me-I was thinking, ‘Damn, I’m not so contemporary after all.'”

Central to that ageless quality of Walker’s music is how readily it allows for inclusion for even a listener whose daily life is seemingly so far removed from these ebullient sounds.

“My mother had passed the day before, and we had this long-planned recording session,” King says. “My mother was on my mind. I somehow made the session. Did about three days, and then made it back for my mother’s funeral. The lyrics may be ‘Let’s boomerang…Let’s get this groove going, let’s party.’ Even though the lyrics are like that, the emotion I had built up inside me came out on the tape. There’s a lot of emotion in my delivery. That’s what Junior Walker was about back then.”