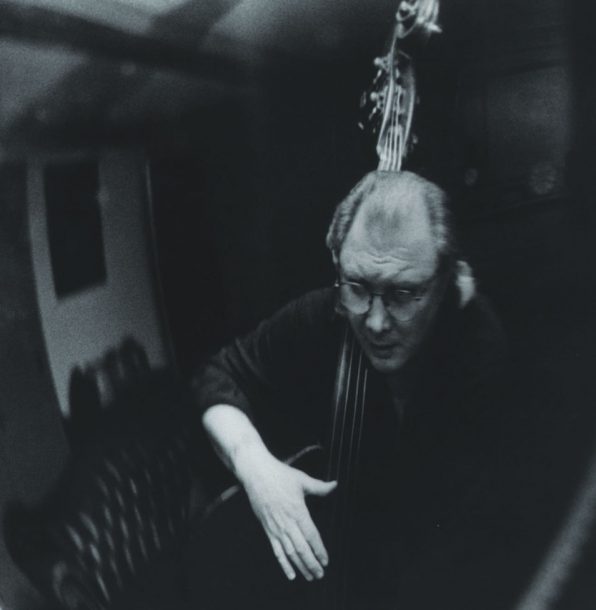 In the mid ’80s, bassist Dominic Duval bailed on the jazz scene. There followed a lengthy period where his main gigs were in construction and window washing rather than music. He bought a house on Long Island, raised a family (five kids, includingtriplets) and “lived like a normal person.” But he never quit playing his bass, if only forhisown enjoyment at home.

Suddenly, a decade later, Duval is a ubiquitous figure on the avant garde scene by virtue of his celebrated gig (since 1996) with Cecil Taylor and his many collaborations with a host of wide-open artists like saxophonists Mark Whitecage , Joe McPhee, Marshall Allen, Elliott Levin, and Bob Ackerman, trombonist Steve Swell, trumpeter Herb Robertson, and pianist Joseph Scianni. He also leads his own highly charged improvising quartet featuring violinist Jason Hwang, cellist Tomas Ulrich and reedman Whitecage (check out their State of the Art on CIMP).

A commanding presence on stage-one of the few bassists able to meet Cecil Taylor’s torrents of energy head on with an imposing power of his own-Duval has lent his bold, compelling lines and remarkable arco technique to 20 CIMP sessions. On Ivo Perelman’s Seeds Vision Counterpoint (Leo Records), he delves into prepared bass and electronic enhancements on his Prescott upright. At a recent Knitting Factory gig with his string ensemble he played a trimline Hutchins bass tuned up a fourth to ADGC.

Duval appears on two new volumes of live recordings with the Cecil Taylor Quartet (Qu’A, Cadence). He calls his work with Taylor “my idea of heaven…one of the greatest things I’ve experienced in music.” Regarding this newfound period of high productivity, Duval remains humble. “It’s like somebody gave me a gift and said, ‘Do what you wanna do. Do what you think is important.’ And I’m doing it,” says the 55-year-old bassist. “I’m not trying to sound like anybody. I’m not trying to rip off somebody’s chops or sound like Paul Chambers. Because I’m really more interested in finding music that expresses my desires and my needs as an individual. And people seem to be in synch with what I’m trying to say.”