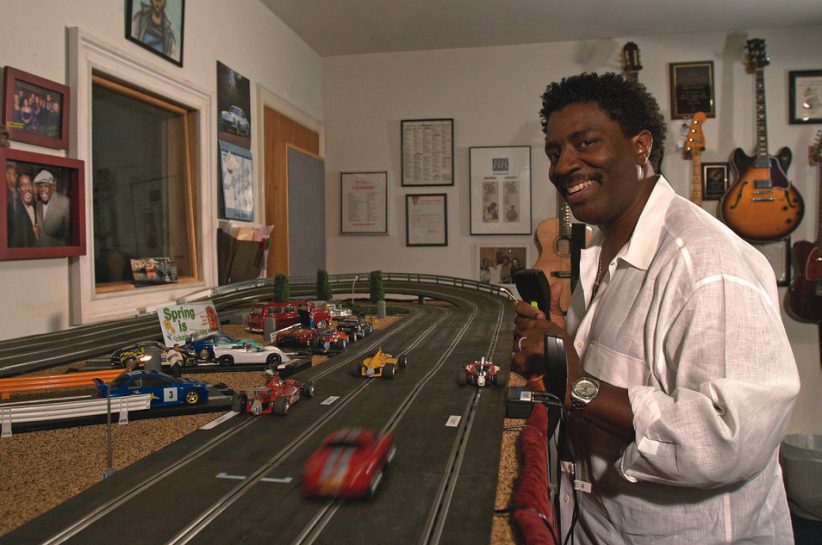 Guitarist Doc Powell’s home studio, in the back of his modest Pasadena ranch house, is soundproofed with thick velvet drapes that cover the windows and dramatically curtain the entire back wall. Curtains also hang in swags along the ceiling. Track lights illuminate framed citations and tour photos, a wall-mounted TV and the vivid blue carpet. Powell’s guitars are alternately mounted on the wall or recline on the floor among the stools and mike stands. The focal point is his desktop production area: a PC, a keyboard, a mixer and a mobile rack of audio equipment.

Powell’s face breaks into a grin, but it’s not sparked by the thrill of his production tools. He’s focusing on a chest-high plywood platform against the near wall that is tricked out as a miniature car-racing world replete with greenery, a gas station-even mini homeboy figures. Powell clutches a joystick and watches a pair of Scalectrix muscle cars whiz around the four-lane track.

“That’s my latest escape-the slot cars,” says Powell, an enthusiast since he was a kid in Spring Valley, N.Y., some 20 miles north of the George Washington Bridge. The fascination stayed with him through a career that includes his first recording session at 15, directing soul legend Wilson Pickett’s band at age 21, collaborating with fusion violinist Michal Urbaniak and leading Luther Vandross’ touring band for 13 years. Nine solo albums later, the tiny wheels still thrill. “I play with my grandson and whatever friends come over, and every time I have a recording session over here we always end up racing before and after. That’s why I have four lanes!”

The track is a simple pleasure for Powell, named Doc in honor of the McClellanville, S.C., doctor who delivered his father and his father’s nickname. “It was tough growing up with the name Doc. People think you’re just trying to be cool,” he laughs.

With their only daughter now an exec at Columbia TriStar, Powell and his wife, Charlene, are empty nesters-though they’ve hosted a stream of relatives and friends for various periods since they moved from New York in the late ’80s. This is their third California home, and with its ’60s modern design, it’s a perfect backdrop for a Brat Pack film. But ring-a-ding-ding martini mixers are not the Powells’ style, though they love retro furnishings, vintage clothes and black art and collectibles. African sculpture and wall hangings as well as framed color photos taken by Powell while on safari in Africa dominate the long wood-and-flagstone-walled living room.

The four-bedroom house is commodious, but the studio is where Powell truly lives. It’s where he recorded his brand-new album, Cool Like That (Heads Up), which features guests turns by saxophonists Kirk Whalum and Michael Lington, trumpeter Mark Ledford, keyboardist Kevin Toney and singer-songwriter Gary Taylor. It’s where he practices on any of his seven guitars, including the blue and white Fender Stratocaster, the blonde sunburst acoustic or the black Chet Atkins nylon string. It’s also where he’s recording his second gospel album, Praise Him, and finalizing plans for his second tour with gospel star Kirk Franklin. A Christian, Powell has also recorded with Shirley Caesar, Tramaine Hawkins, Rance Allen, the Mighty Clouds of Joy and newcomer Smokie Norful.

Powell likes to golf and ride his bike when he can, and also enjoys gardening and refinishing furniture. But when not on the road he’s mostly in the studio-because, of course, there’s that slot car racetrack. “I’ve always spent a lot of money on equipment, always being up-to-date,” Powell explains about installing the track last year. “Recently I said: This is a really nice-size room and I want this room to supply a lot of needs for me ’cause when I close the door everybody leaves me alone.”

“I just finished Over the Top by Zig Ziglar, who is a Christian and a motivational speaker. Over the Top is a great book. I’m getting ready to read The Purpose Driven Life by Richard Warren. I want to read something that’s going to help me: motivational, inspirational books.”

“These days, with a new record out and working on another, the only thing that gets made is a whole lot of salad! But I make my own salad dressing. During normal times, I’m cooking mostly every day. I cooked at Real Men Cook [a charity Father’s Day event] at USC two years in a row. This year I made turkey lasagna with a Bolognese sauce. Last year I made my Smothered Creole Delight. That’s a smothered chicken with blackened gravy with mild Creole seasoning and garlic mashed potatoes.”

“I love to be comfortable and I’ve grown to love suits a lot more than I did when I was younger. I like Donna Karan, but my first tailor-made suit was by [independent African-American designer] Raymond McNeil. He worked for Calvin Klein for a while and he’s made a few things for me. I also like casual shoes, like these Pro-Keds, which I bought in [Greenwich] Village. I’ll wear these with a suit. I like a nice, flat sneaker-simple with a little detail-to wear with dress pants.”

“Lately I’m going crazy over old cars. I found a 1953 Chevy Bel Air, black, and I’m going to kick it up a notch. I can’t wait to get it painted, get the chrome, do the interior. That’s gonna be my ride. And I’m looking at a 1967 Cadillac that was owned by my late uncle. I’ll probably use that as a limo and really have some fun.