Skip to content
Become a member and get exclusive access to articles, live sessions and more!
Start Your Free Trial
Home > JT Archives > Dirty Dozen Brass Band: The Brass is Back 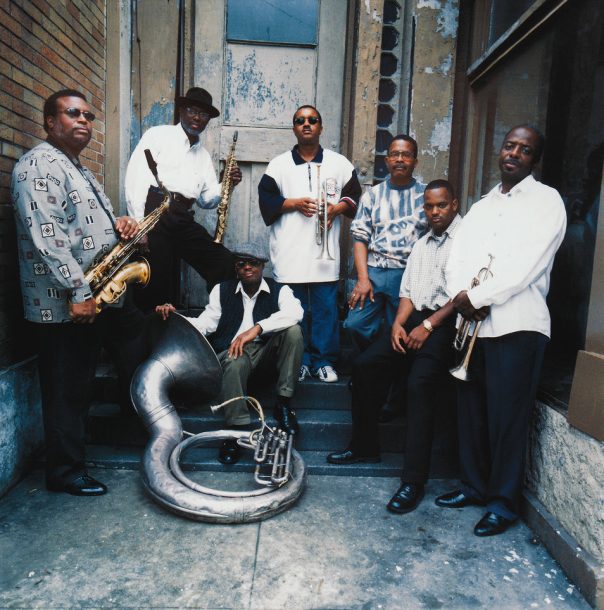 When the Dirty Dozen Brass Band hit the streets of New Orleans over two decades ago, it packed such a punch that the music continues to reel from its impact. Revolutionizing traditional brass band music by adding modern influences, the Dozen sparked the interest of young players and listeners, resulting in a revitalization and continuation of the brass band heritage. Through its recordings and travels these innovators took the music to bandstands around the world with the hot new bands like the ReBirth, New Birth, and Soul Rebels following close behind.

Considering the Dirty Dozen’s position as leaders in the new style and its success both here and abroad, it came as quite a surprise when in 1996 it changed its brass band configuration by adding electric bass, keyboards, and a trap set to its sound. The group even went so far as to drop “Brass Band” from its name on its 1996 album Ears to the Wall (Mammoth) with some cuts leaning toward a smoother style.

The Dirty Dozen Brass Band name is back on the ensemble’s latest Mammoth release, Buck Jump, along with a renewed sense of spunk. While the additional instruments remain in the mix, the Dozen set out to make a disc that would capture the exuberance and New Orleans flavor upon which its reputation was built. With this in mind, keyboardist John Medeski was brought in to produce the album, the first time the Dozen had used a fellow musician in the studio.

“The situation was that we thought we wanted someone in there who would offer an honest opinion of how things were going and how things sounded,” says trumpeter Gregory Davis. “He was really into it and flew here two or three times on his own-not on our budget-to meet and greet everyone and make sure everyone was comfortable with him doing it.”

To the surprise of Davis and the other Dozen members, most of the material that ended up on the album came from first takes. Davis says that on some of the cuts, like Louis Jordan’s humorous, Caribbean-laced “Run Joe,” the musicians were under the impression that they were just doing a warm-up when, in fact, the tape was rolling with the run-through version appearing on the disc.

“I tried to catch them when they didn’t know it,” agrees Medeski, who says he has been a fan of the band since he was a kid. “For me, what I wanted to avoid was getting into a too slick modern R&B sound. One of the essences of great New Orleans music is that it’s got the funk and there’s a spirit that has to be there that doesn’t come from ironing out details.”

On the album’s final cut, “Nuttballus,” the audience is even privy to drummer Terence Higgins trying to work out a drum roll. He stops and starts again while members of the band offer suggestions.

“They just wanted the raw feeling with or without the mistakes,” says Davis. “It’s probably not how we would have done it, but it is a fresh approach for the Dirty Dozen to do a record. I guess it just reminded us that we’re regular human beings. In life you set out to do things and stumble along the way. In making the record and leaving the little glitches in and letting people hear the voices of what’s going on, it lends itself to a little bit of reality.”

The Dirty Dozen returns to its early street anthem style on “Old School,” a soulful brass band number that saxophonist Roger Lewis says was made up on the spot. Using the traditional two drum format with a separate snare and bass, the song takes off on a brass band groove solidly laid down by sousaphonist Kirk Joseph, a former member of the Dirty Dozen who filled in for the album’s entire recording session.

“You know a lot of times, musicians play their best music when they just go on the stand and start playing,” says Lewis, who blows on baritone, soprano, and flute on the album. “That’s what happened with ‘Old School,’ that thing just developed.”

The tune also benefits from the magic combination of Lewis’ bari and Joseph’s sousaphone, a marriage that enhanced so many early Dirty Dozen albums. “That was the bomb,” exclaims Lewis of once again teaming up with Joseph. “You know we used to practice so much together in the early days, we create this beautiful tension. Not to take anything away from Julius (regular Dozen tuba player Julius McKee), he’s a fantastic player, but I’ve just spent more time with Kirk.”

Buck Jump opens in a funky mood on tenor saxophonist Kevin Harrison’s, “Unclean Water,” on which Medeski gets an opportunity to wail with the guys on the big B-3. The fat horn vamps and ensemble work of the front line with trumpeters Davis and Efrem Towns and saxophonists Harrison and Lewis, plus guest trombonists, dig a deep groove atop Medeski’s wall of chords.

“For me, that was the benefit of being a musician and producer,” says Medeski, who is heard on three cuts. “It was fun. Just being in New Orleans and working on music, in general, you get a lot out of it. It’s like being a sponge with the whole scene and whole vibe. And Kevin made a mean gumbo; it was slamming.”

Beside the let-it-roll approach to the recording of Buck Jump, the material plays an important factor in the funkier, harder edged sound of the disc. It is the original members of the Dirty Dozen either individually or collectively contributing all but three tunes on the album. Those coming from other pens include the crowd-pleasing “Run Joe,” the late New Orleans saxophonist Fred Kemp’s modern jazz screamer, “Duff,” and Marvin Gaye’s tap-dancing “Inner City Blues (Make Me Wanna Holler).” The originals move from the streets of Davis’ “Time” to Lewis’ Latin-tinged “Pet the Kat” to the group’s kicking “Dead Dog in the Street.” And while Davis says there hasn’t been any real philosophical decision to return to the rootsier, New Orleans styles for which the Dozen has been known, the music and overall feel of the album says otherwise.

“We never played just one kind of music anyway,” says Davis,which, of course, is evident in the diversity of music the band has presented on albums such as its Columbia discs like Jelly (The Dirty Dozen Brass Band Plays Jelly Roll Morton) and Voodoo, which included guests trumpeter Dizzy Gillespie and saxophonist Branford Marsalis.

While the Dirty Dozen Brass Band has naturally gone through its share of changes-personnel, instrumentation-it has retained the essence of the music from which it bloomed.

“We started out like everybody else playing parades and barrooms, baseball games and private parties,” says Lewis. “We had no clue that we were changing the music. We were just practicing, trying to play some music. The spiritual part of it all is recognizable, the spirit of New Orleans music. That’s why it feels the way it feels and why people are so moved by it.”

Medeski says his goal as producer was to help better incorporate the additional instruments into that special Dirty Dozen spirit. “One of the things the Dirty Dozen is about is trying to push the limits of the traditional brass band format,” says Medeski. “And they changed up their instrumentation to try to move it forward that way. My aesthetic is sort of old school in terms of sounds, so I think part of it was to add the texture of drums and keyboards to the Dirty Dozen.”

When the Dirty Dozen Brass Band now takes the stage, it looks more like an R&B band, except, perhaps, for the tuba. But the sound is unmistakably that of New Orleans and the Dirty Dozen, a band born from the streets and from a centuries old tradition. Innovators from the start, the Dirty Dozen has never been content to rest on its well-earned laurels, but continues its experiment of shaking up the music.

“We developed from the days in the Glass House [a New Orleans neighborhood club] and on the streets,” Davis explains. “I think that’s something that a lot of bands that aren’t from New Orleans can’t reproduce. To actually be in touch and retain that kind of feeling, that’s always special. I always want to keep that.”

“I’ve been listening to a lot of James Brown on a four-disc set called Star Time on Polydor.