Skip to content
Become a member and get exclusive access to articles, live sessions and more!
Start Your Free Trial
Home > JT Archives > Directions In Music 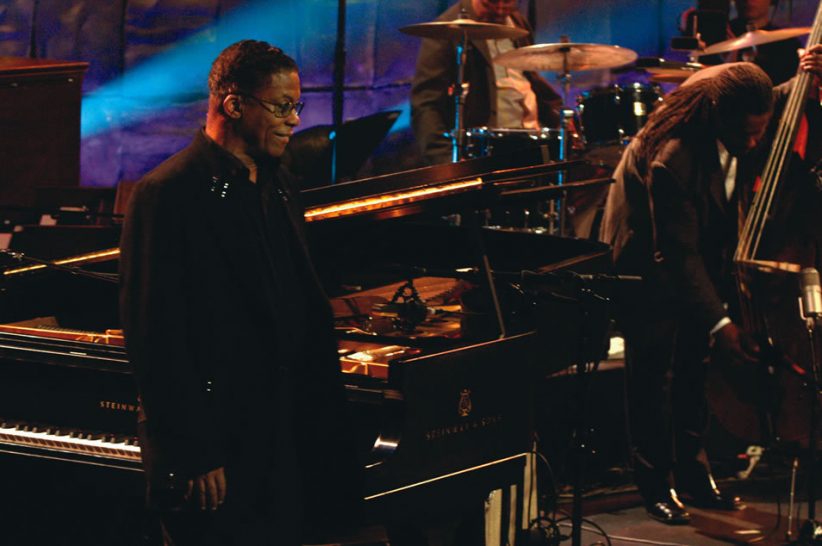 “The group had a thing,” said Michael Brecker onstage. “As a whole, it was greater than the sum of its parts.” Brecker was offering an assessment of the John Coltrane Quartet, and his words had the ring of absolute truth. But coming halfway through this concert, they also highlighted an unspoken problem: What happens when the parts are so formidable as to yield an insurmountable sum? This was one of several dilemmas haunting Directions in Music during its JVC Jazz Festival debut at Carnegie Hall. Herbie Hancock’s all-star quintet, assembled last fall to commemorate the 75th birthdays of both Coltrane and Miles Davis, infused its New York performance with moments of thoughtful reflection, admirable restraint and fierce resolve. But this version of Directions-comprised of Hancock, Brecker and Roy Hargrove with George Mraz and Willie Jones III taking over from John Patitucci and Brian Blade-seemed less a fully functioning ensemble than an assemblage of outsized abilities. Given the project’s dedication to the Coltrane Quartet and the ’60s Miles Davis Quintet-two of the most extraordinarily telepathic bands in the history of jazz-this shortcoming seemed at times like a glaring fault.

A case in point: “The Sorcerer,” which opened the show. Hancock’s composition, first heard on the 1967 Miles Davis album of the same name, is a small masterpiece of color and mood; its harmonic contours convey mystery while inviting momentum. At Carnegie there was plenty of the former but little of the latter, as Mraz and Jones (on bass and drums, respectively) settled too far at the back end of the pulse. The next tune, Hargrove’s “The Poet,” suffered a similar fate; the slow waltz is meant to shimmer, but sounded flat. Things perked up during an unaccompanied arco solo by Mraz (mostly played in a cellolike upper register), then wilted again during the group’s conflation of “Impressions” and “So What.” That arrangement’s deliberate tempo, and Jones’ metronomic cross-stick pattern, seemed an attempted emulation of Miles’ In a Silent Way. It came across as static, despite strong contributions from Hancock, Hargrove and Brecker. They all soloed as well on “Misstery,” a slippery rearrangement of the standard “Stella by Starlight”-but here, and throughout the first set, the rhythm section was noticeably too polite. Mraz’s bass lines lacked the driving quality this music demands, and Jones appeared almost timid; he may have been overcompensating for a reverberant hall (which had caused problems on a Hargrove bill the previous year).

There’s no way of knowing whether these factors are what motivated Hancock to call an unscheduled intermission, or whether he delivered a halftime pep talk to rally the team. Whatever the case, the ensemble reentered the fray with guns blazing; Coltrane’s “Transition,” introduced by a ferocious drum solo, bristled with harmonic dissonance and rhythmic propulsion (and elicited fearless solos all around). Then Brecker essayed an a cappella “Naima”-less vivifying than the version he’d played at Carnegie a year prior but still a tour de force, especially during a string of impossible arpeggios and harplike glissandi. Hargrove reached parallel heights on “My Ship,” in a lyrical sense; his flugelhorn sound was achingly lovely, his approach to melody unerringly direct.

The group closed its concert with Brecker’s invigorating “D Trane,” and, after a brief exit, encored with a tricky arrangement of Wayne Shorter’s “Pinnochio.” These last two entries, which found the ensemble responding almost as one, hinted at an intuitive cohesion that had been mostly absent during the course of the night. Which raises the issue of preparedness. Directions in Music traveled extensively in 2001, but that tour (documented on Verve’s new Live at Massey Hall) featured Patitucci and Blade. The current Directions lineup could yet hit its stride, given a similar opportunity for growth. One hopes that this will happen somehow. Certainly the musicians, as individuals, have talent to spare; all they need is a richer, more stable common ground.