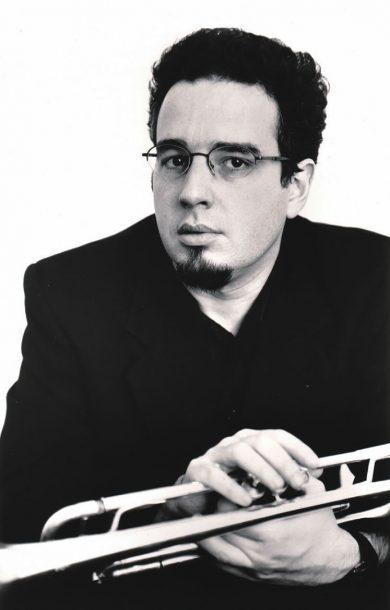 Jazz in Argentina, according to Diego Urcola, “is in its best historical moment, both qualitatively and creatively, chiefly because of the knowledge and experiences brought over by musicians returning from Europe and the U.S.A.” As a part-time returnee to Buenos Aires, where he recorded his latest album, Urcola trademarks his class as a performer and writer on Soundances (Sunnyside). On the CD’s keenly recorded Argentinean-tinged jazz, the long time Paquito D’Rivera trumpet and flugelhorn player says, “The fusion of jazz elements with Argentine popular music, such as tango and folklore, is what Argentinean music needs to develop, as Cuban and Brazilian music did in their respective moments. Although only a beginning, this recording contributes something in that regard.

“I consider the musicians that recorded as a good example of the excellent level of musicianship in Argentina,” Urcola continues. “Pianist Guillermo Romero’s trio is among the most representative of musicians closer to jazz. Electric bassist Willy González’s group is of importance along folkloric lines, and Juan “Pollo” Raffo is a foremost composer and arranger in Argentina.” Raffo also produced the recording and played piano or keyboards on three of his own compositions.

While on a 1992 European tour with D’Rivera, Urcola was closely studying Astor Piazzolla’s music, when suddenly the tango master died. Moved by the loss, the trumpeter penned the modal-bluesy tango nuevo “Blues for Astor.” Bandoneonist Juan Dargenton and Urcola play it on Soundances with expansive, punchy harmonic density that ascends into a rapidly swirling rhythmic core with soloing of considerable merit from all concerned. “Final Waltz,” composed especially for this CD, showcases Milesian sensibilities in its textural and sonic mutedness, with excellent soloing shared by acoustic bassist Hernán Merlo, Urcola and Romero. Miles Davis is more directly referenced in a bandoneon and muted-trumpet duo interpretation of “Blue in Green.” “Lorena,” a Brazilian jazz number inspired by Urcola’s wife, is the CD’s remaining composition from Urcola, who says he doesn’t “write regularly” and hopes to discipline himself “more as a composer but hasn’t found the time yet.” Urcola, however, did find time for including fine compositions from his Buenos Aires notable associates, including a mandatory-albeit-rich reinterpretation of the Argentinean musical sine qua non, “Alfonsina y el Mar.”

After daily trumpet workouts, Urcola can be found playing at any number of places in New York City such as Smalls, Fat Cat or the Jazz Gallery. Approach him, as congratulations are in order.