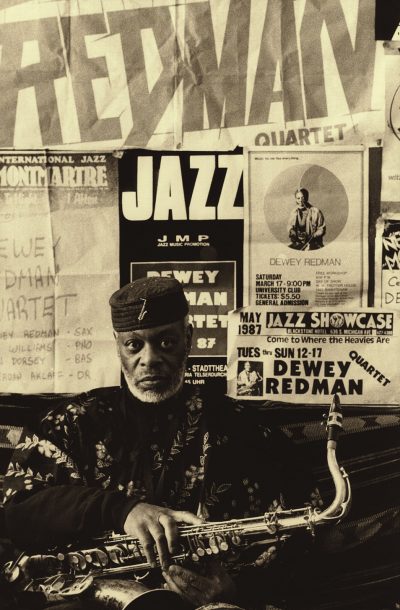 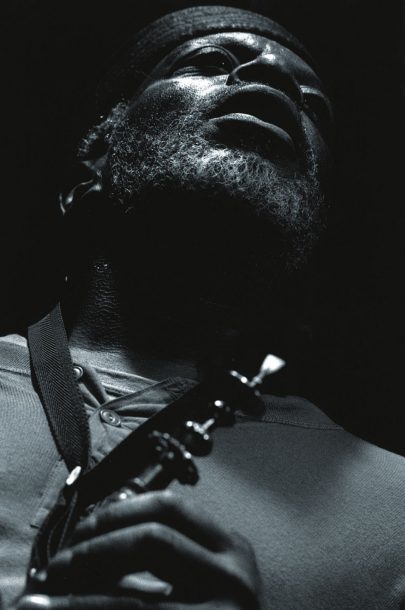 It is easy to define someone by their associates. Jazz writers do it all the time by spooling off the names of any given artist’s collaborators or former employers in an effort to approximate the parameters of the artist’s work. In fact, everybody from corporate jazz marketing departments to the (wo)man-on-the-street fan does it. Still, these exercises only get the listener so far, and quite often do not bring the listener close enough to hear the artist on his own terms. For the short term, early in an artist’s career, definition-by-association can provide a boost. Yet, if perpetuated too long, it becomes a barrier; the associations may prevent some listeners from checking out an artist, or may create unreal expectations about the work. In the end, definition-by-association diminishes the majesty of the jazz tradition because it devalues the individuality of its standard bearers.

As much as any artist of his stature, Dewey Redman has gotten the short end of the definition-by-association deal. Historically, he has been invariably, if not instantly, linked to Ornette Coleman (directly and via Old and New Dreams), Keith Jarrett and Pat Metheny, though only the tenor saxophonist’s association with Coleman provides any insight into Redman’s music whatsoever (why, for example, is Redman’s work with Charlie Haden’s Liberation Music Orchestra almost always mentioned, but never his work with Randy Weston’s The Spirits of Our Ancestors, with whom Redman just performed at the Brooklyn Academy of Music?). More recently, Redman has frequently found himself pegged as the father of Joshua Redman (of whom Redman is obviously proud).

Ironically, these associations have not prevented a goodly portion of Redman’s recorded output as a leader from being out of print, even on labels such as Impulse! and Galaxy. Nor is Redman regularly performing in the U.S. as a result of these tie-ins, let alone being elevated anywhere close to the celebrity status of Metheny and Joshua Redman.

The shame of it all is that Dewey Redman is one of the great tenor players of our times, a multi-faceted soloist who is equally masterful interpreting a sinewy bossa, a bebop flag-waver, or a Harmolodic concept (even though he also plays alto, clarinet, and musette, he’s such a powerful tenor player that it’s hard to call him anything else).

His recent Palmetto disc, In London, recorded at Ronnie Scott’s, confirms this. Leading his working quartet of pianist Rita Marcotulli, bassist Cameron Brown and drummer Matt Wilson, Redman is as cliché-free on the smoldering ballad opener, “I Should Care,” as he is with the searing envelope-pushing original, “Eleven.” Yet Redman does not merely do the eclectic thing, covering all the stylistic bases in a calculated effort to please all of the people at least some of the time. Whether Redman is dishing up fat-toned Jug-ish bluesiness, exemplifying Long Tall suavity, or exploring unorthodox structures with his patented voice-enhanced textures, he creates compelling music. The reason for his cogency is so simple that it is no wonder why it has eluded critics who try to free-associate their way to the core of Redman’s musical identity.

“It’s honesty,” Redman stated recently. “I cannot be a dishonest person, so the music has to be honest. I’m just a country boy from Texas trying to make it in the big city. That’s who I am. I guess you could say I’m multi-directional because I play blues, ballads, and avant garde-and I play the musette. I play a variety of styles because I would get bored just playing avant garde all night. It’s not easy, and I don’t always do it successfully. It doesn’t all come off, always; maybe it all comes together a couple of concerts a year. It’s a challenge to me and it’s a challenge to the musicians who play with me. It would be easier for me just to play one style and it would probably be easier for some other people if I just played one style. But to do that would be less than honest.”

Redman has an equally simple one-word answer when asked which aspect of his approach best conveys his honesty: “Sound. It’s the first thing I reach for. It’s the most important thing to me. If I can get a good sound, then I’ve got half the battle won. Technique… I don’t know; what is technique? There’s technique in sound, so I approach my music from that viewpoint. I reach for the sound first no matter what I’m playing, but I’m not playing with the same sound on every tune. I try to play with the flavor the tune calls for. I couldn’t play with the same sound with Keith Jarrett as I did with Ornette Coleman. It has to be different. The compositions say different things. So, I don’t have, say, one bebop sound, because there is a lot of variety within bebop. I have a lot of sounds that I can use to play bebop. Really, the answer is: ‘all of the above.'”

While the recently married Redman asserts that his approach has been the same since his earliest days gigging in blues bands, usually after a full day of teaching 5th grade and band in the local schools near Austin, he acknowledges that his proving ground was San Francisco during the ’60s. “I went to San Francisco for two weeks and stayed seven years,” Redman chuckles, recounting how, in 1960, he embarked on a five year plan to play jazz and “get it out of my system” before settling down as a teacher. Playing venues like Bop City and Soulville, and performing with musicians such as drummer Eddie Moore and bassist Donald Raphael Garrett, Redman says he “basically got my stuff together. Even though I played by ear-still do-I rented a piano to learn 2-5-1 and everything else I thought I needed to know to play in New York. Little did I know that a lot of great musicians in New York don’t read. I like Louis Armstrong’s statement about reading: ‘Yeah, I’ll read it unless it gets in the way of me playing it.’ And, the thing I do with my voice came to me one night there, and I did it on my first record-Look For The Black Star-which I recorded there. I didn’t know what the hell it was. It scared the hell out of me. But when it came out, I decided not to use it as a gimmick, but just to use it when the occasion called for it.”

When it is suggested to him that perhaps he is as much a west coast player as he is a Texas tenor, Redman responds that being a Texan is a permanent condition. Asked to speculate about why Fort Worth produced so many great musicians, Redman is quick to say “It’s the water. You know, a lot has been said about the musicians from Fort Worth, but what people don’t realize is how small Fort Worth was back then. So, when you think about all the musicians that came from Fort Worth-Julius Hemphill, J.W. (John Carter), (Charles) Moffett, Ronald Shannon Jackson…I’m leaving a lot out, I know-you have to remember that it wasn’t a big city. Ornette was just a year ahead of me in school. I remember him playing Louis Jordan tunes with a band called the Jam Jivers; Prince Lasha was in that band, too. So, when I went to his house after I got to New York, it was because he was a friend of mine. But, he said, ‘Bring your horn over.’ Before I knew it, I was working with him; but he never said ‘You’re hired’ or anything like that. Maybe if we were both from a big city it wouldn’t have worked out like that.”

A lot of things wouldn’t have worked out like they did if Redman had stuck to his five-year plan, a five-year plan that is now approaching the 40-year mark.

Redman plays a Selmer Mark VI Tenor Saxophone with a 90/2 Berg-Larsen hard rubber mouthpiece and a Prestini #4 reed. His alto is a 30-something-year-old Selmer, with which he uses a Brilhart mouthpiece and a #3 and 1/2 Prestini reed. He rarely plays his Buffet Clarinet. His musette does not have a brand name; he uses hand-wrapped Chinese double reeds.