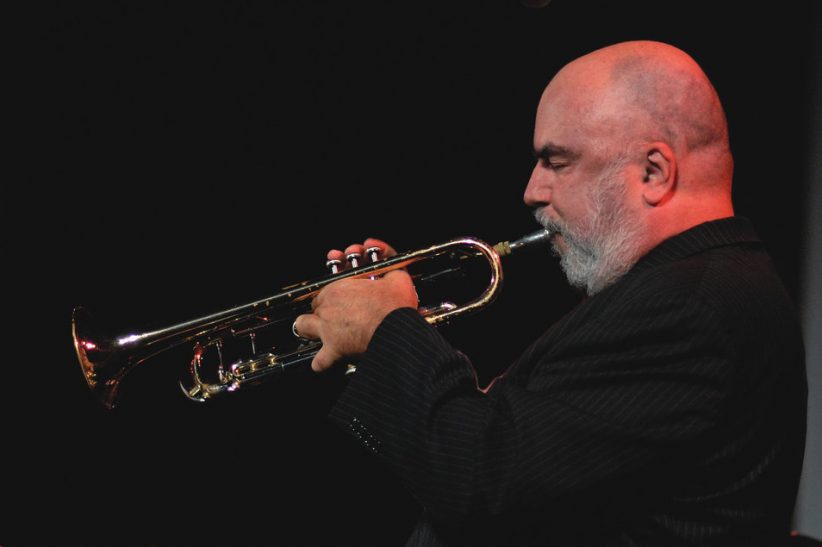 Christian McBride admits to growing up in what was “definitely a Motown household,” so it wasn’t much of a stretch for him to be named the artist in residence at the free, outdoor, 29th-annual Detroit Jazz Festival over Labor Day weekend. Especially since the festival theme was “A Love Supreme: The Philly-Detroit Summit,” and the bassist hails from Philadelphia. As artist in residence, McBride made more than a half-dozen appearances at the festival, including three leading his own bands or those groups he’d helped assemble. They ranged from an all-star big band doing a tribute to Marvin Gaye to a Philly-Detroit Summit sextet concentrating on the two cities’ mid-20th-century jazz heritage. The varied settings gave McBride a chance to display his eclectic interests and versatility on both acoustic and electric basses.

The Philly/Detroit Tribute to Marvin Gaye on opening night (Friday, Aug. 29) benefited from a strong, crowd-pleasing set by singer Dianne Reeves as a warm-up. McBride not only led the band from center stage while also playing electric bass guitar, he also wrote the arrangements, which covered the range of Gaye’s career from “Hitch Hike” to “What’s Going On.” If anything, the arrangements were too beholden to the Motown sound McBride admits to growing up on, not doing much to re-imagine Gaye’s music, adding little more to the original Motown arrangements than some jazzy punching up and fleshing out. But the muscular big band did make for great, bigger-is-better nostalgia lapped up by the appreciative audience. Three vocalists, aided by four back-up singers, shared lead-vocal duties: newcomer Jose Jones was a bit shaky, Rahsaan Patterson came close to the Gaye falsetto, and Lalah Hathaway (the late Donny’s daughter) sang with rousing confidence.

The Philly-Detroit Summit personnel and repertoire highlighted McBride’s organizational skills as well as his knowledge of the two cities’ jazz heritages. The sextet was equally divided between musicians from Philadelphia (McBride, tenor saxophonist Bootsie Barnes and trumpeter Randy Brecker) and Detroit (pianist Geri Allen, guitarist Perry Hughes and drummer Karriem Riggins). Aside from two ballad standards, the tunes were all by jazz musicians from or closely associated with the two towns, such as Milt Jackson, Kenny Burrell, John Coltrane, Bobby Timmons and Thad Jones. While Allen, Brecker, McBride and even Riggins are familiar to most jazz fans, it was enlightening to hear Barnes, a Philly hard-bop legend, and the incisively original Detroit guitarist Hughes more than hold their own in such all-star company. At a festival where some bands, both ad hoc and organized, never achieved compatibility or unity, this sextet was a model of both.

Less successful was the Christian McBride Band, later that day. Obviously modeled after Weather Report-they even did a Joe Zawinul tune-the quartet featured a plethora of self-indulgent solos and never gelled as a unit. In front of his variety of keyboards and synths, Geoffrey Keezer acted like a kid in a candy store; saxophonist Ron Blake wailed and meandered; drummer Terreon Gully attempted to fuse power and intricacy, overwhelmingly, and McBride showed off his chops and, at times, a distorted electric double-bass. It was all the excesses of jazz-rock fusion, for better or worse.

The four-day festival featured over a hundred bands/acts on seven different stages, plus 16 panels and/or interviews in a Jazz Talk Tent. Over two-dozen student bands (mostly college and high school) performed, some with guest soloists. McBride made guest appearances with the Detroit Symphony Orchestra Civic Jazz Orchestra conducted by Rodney Whitaker, setting up a rare triple-bass (Whitaker, McBride and the orchestra’s Tony Lannen) lead and solos on “Whims of Chambers,” a tune by the late Detroit bassist Paul Chambers. McBride also sat in with the quintet from the Brubeck Institute in California, where he has taught. Other memorable student big-band events came from trumpeter Jon Faddis revving up the Michigan State University Big Band in a program of Thad Jones pieces and Steve Turre joining the University of Michigan Jazz Trombone Ensemble (10 trombones and a rhythm section) for “St. Thomas” and a blues replete with plunger solos.

Turre, who appeared in a Latin Jazz All-Stars tribute to Hilton Ruiz and Mario Rivera, also sat in with the combined Gerald Wilson and Count Basie Orchestras in a “One O’Clock Jump” that was exactly the kind of special moment that makes a festival festive, one that included additional guest appearances by McBride and Geri Allen, as well as guitarist Kenny Burrell, who had played with Wilson’s big band. Other professional big bands were highlights of the last day (Monday). The ICP (Instant Composers Pool) Orchestra from Europe did their avant-zany stuff, including a memorable revival of Herbie Nichols’ “Spinning Song.” And the Dizzy Gillespie All-Star Big Band, directed by Slide Hampton, closed out the festival gloriously with guest Roberta Gambarini-the most impressive jazz vocalist to come along this decade-trading scat choruses with James Moody, Roy Hargrove and Greg Gisbert on “Blue ‘n Boogie,” part of a climactic set that included Hargrove’s moving “I Remember Clifford” solo and a rip-roaring “A Night in Tunisia” to ring out the festival.