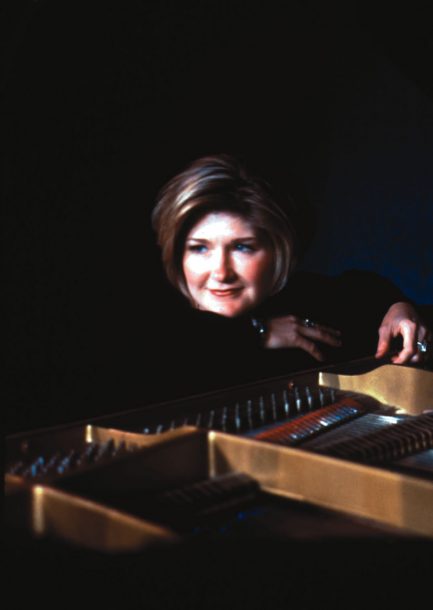 Carpal tunnel syndrome is always a problem, and it looms especially large for those who play the piano for a living. Yet the affliction had a bright side for pianist and arranger Dena DeRose because it taught her that she was also a jazz singer-and a fine one at that. Since that realization about nine years ago, Ms. DeRose has released two recordings as a player and singer, her latest being Another World on the Sharp Nine label.

Now in her early 30s, DeRose began to notice severe pain in her right hand when she was 22. After the diagnosis, successful surgery followed, but her hand remained in a cast for two months. During that time-and basically on a whim-she began to stand up and sing with her trio in her hometown of Binghamton, New York, much to the delight of her audiences. When the cast eventually came off, her therapy was to go back to the piano, and she’s been accompanying herself ever since.

“I really didn’t get into jazz until I was about 22,” she says, ” but I put my energy into it when I was learning. I first heard Miles Davis on Kind of Blue, and Red Garland was one of my first influences.”

Self expression is DeRose’s greatest reward, as well as having people who are supporting her burgeoning career. On her latest release, she’s joined by Steve Wilson on sax, Ingrid Jensen on trumpet and flugelhorn, Steve Davis on trombone, Dwayne Burno on bass, Mark Taylor on drums, and Dan Sadownick, percussion. The tunes are a mix of standards and originals, with a particularly appetizing arrangementof “SpringIs Here.”

DeRose is also a music educator, conducting seminars and master classes at universities andhigh schools. “I never think about other singers in a competitive way,” she says. “All I try to do is my thing. I don’t even think about ‘making it.’

I’m just doing what I feel right now. And wherever I’m at goes into my music. It’s all I ever think about.”