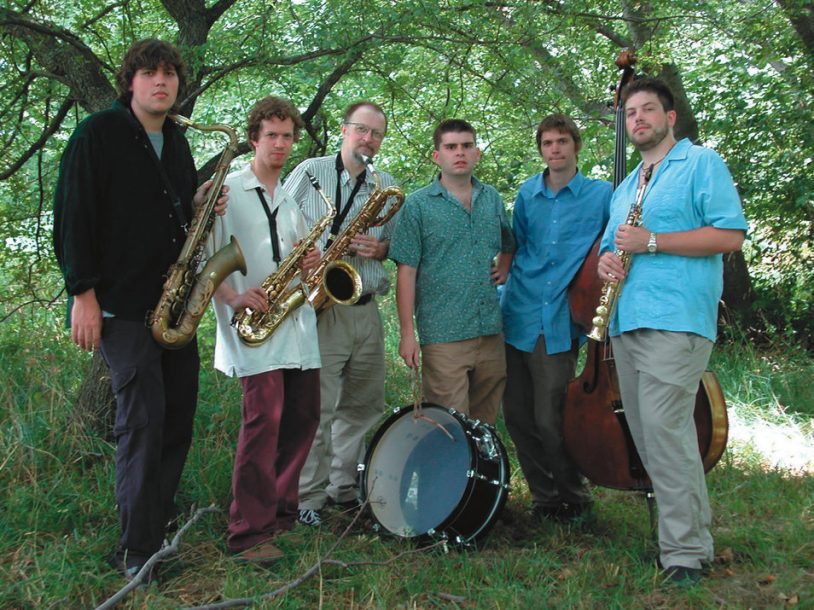 One of the first reviews ever published about the Boston-based sextet Dead Cat Bounce extolled the group’s ability to “intone the laughable and the frivolous and distinctly nonuptightness of music.” Matt Steckler, the leader of the four saxophones, bass and drums group, loved the critique because it confirmed the spirit that fuels the group. “I think music sometimes gets a little too serious and a little too intellectual,” he says. “I think one of the great things about this band is it knows how to have fun and not take itself too seriously.”

That should be apparent from the group’s name-stock-market jargon for the minimal recovery of an economic trend after it hits a steep decline-which Steckler defines alternately as evoking deceased jazz masters who bounce back to life through the group’s music. Yet its third CD, Home Speaks to the Wandering (Innova) proves that even if the group doesn’t take itself uber-seriously, Dead Cat’s music doesn’t joke around.

Steckler wrote all the tracks as a commissioned work for the Meet the Composer fund and originally intended it to be an extended suite. “I discovered I don’t really work that way,” he laughs. “Ultimately I like the second tune to sound totally different from the first, and I’m not always concerned with connecting them programmatically.” What carries through each piece is Steckler’s gift for rich voicings among four horn players, all of whom double on at least two different saxophones. While the World Saxophone Quartet makes an obvious touchstone, “I Once Was Vaccinated With a Phonograph Needle” has the warm feel of Ellington’s reeds and “Hepcat Revival” climaxes like a Mingus rave-up, due in no small part to Steckler’s vocal imitation of the bassist.

Dead Cat Bounce began as a recording project in 1997, during Steckler’s time at the New England Conservatory. Along with his soprano, alto and tenor saxophones and flute, the current lineup includes Boston stalwart Charlie Kohlhase (alto and baritone), Jared Sims (soprano, tenor, clarinet), Drew Sayers (alto, tenor and baritone), Arie Werbrouck (bass) and Bill Carbone (drums). (All three of the group’s CDs can be ordered from deadcatbounce.org.)

Steckler recently relocated to New York, although the group maintains its Beantown base. After a recent tour, he has another project awaiting him: a commission from Chamber Music America/Doris Duke Charitable Foundation to compose another work for the group-and that’s nothing to laugh at.