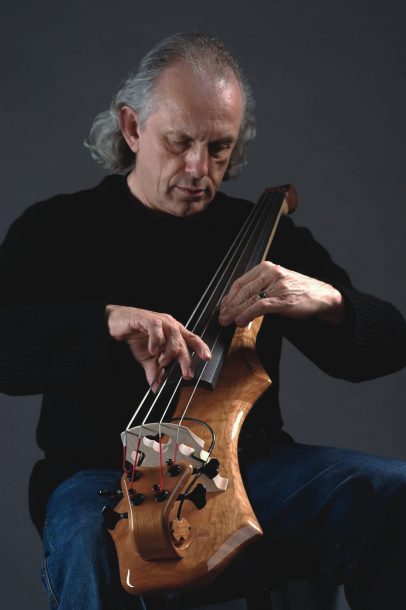 In name, the David Friesen Trio might seem like a unit that puts the veteran bassist in the spotlight, but its namesake says it doesn’t quite work that way. “The music leads,” Friesen says. “Any one of us can be the leader in a given moment just because we’re responding creatively to what we hear in the moment. Once you play that way, it’s hard to play in a situation where there’s manipulation and control.”

Midnight Mood (Intuition) captures the trio-Friesen, pianist Randy Porter and drummer Alan Jones-at a 2002 gig at Stockholm’s Jazz Club Fasching, on a night when their rapport was working overtime. Along with the title track, written by Joe Zawinul, and J.J. Johnson’s “Lament,” the group plays material like “How Deep Is the Ocean?” and “Come Rain or Come Shine.” They open up these often-heard numbers to new possibilities by stretching time, locking into grooves and occasionally ending a song without restating its theme. “East of the Sun, West of the Moon,” one of two songs on the album that were recorded at Porter’s studio a month after the live date, virtually allows the listener to hear the synergy work its magic as the group starts with what sounds like a second-line groove and evolves through solos by Friesen and Porter into a loose open vamp that drives the song home. Here, as well as on a reading of John Coltrane’s “Equinox,” Friesen proves himself to be a master of strong, rapid runs that never skimp on melodic content.

Despite the group’s rapport, Friesen says the group has never rehearsed in its 12-year existence. “There’s no arrangements with any of this music,” he says. “That’s what I think is the beauty of this trio-we give each other the freedom of making a mistake without fear of judgment or condemnation, and we can take those mistakes and turn them into musical ideas.”

Friesen, of course, has a long-standing reputation not only as a leader but as a player who has worked with artists like Mal Waldron and Joe Henderson. He currently works in a number of different settings that include a quintet and duos with saxophonist Bud Shank, guitarist Uwe Kropinski and guitarist Larry Koonse, the latter who joins Friesen in a trio with drummer Joe La Barbera. Like the Midnight Mood trio, none of them practice together prior to a performance, preferring to keep their ears open to new possibilities when they play. “That’s my philosophy about music,” Friesen says, “listening and responding creatively to what you hear.”