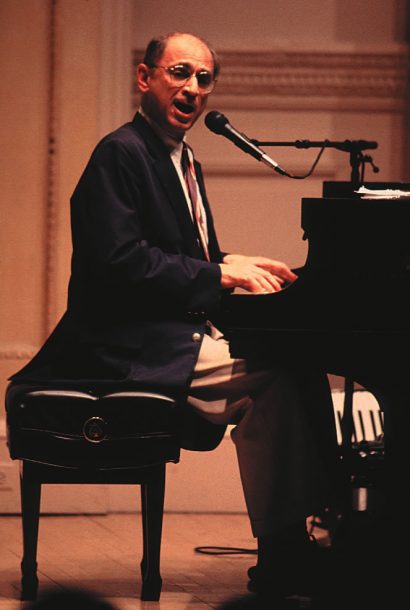 A few years ago, I was having dinner with my old friend Dave Frishberg. He was pleased to learn that I find writing lyrics very hard: “Waltz for Debby” took me a year. I told him that Johnny Mercer took a year to complete “Skylark.” That equally pleased Dave because, he said, he finds the process excruciatingly painful. This not only pleased me-misery loves company-but surprised me, because Dave’s lyrics have a felicitous-seeming ease. They appear to flow from him without effort-brilliant, witty and technically flawless.

In an age when slovenly practice is being taught in lyric-writing classes at such institutions as the Berklee College of Music, Frishberg’s lyrics are little wonders of perfect craft. The rhymes are all true, and more than true, completely unexpected. The trick in writing lyrics is not to lower the standards and accept what nowadays are quaintly called “slant rhymes” or “near rhymes” but to use timeworn rhymes with complete freshness. Dave does this, always; and yet the rhymes always seem like serendipitous discoveries, not the product of painstaking and patient work.

My admiration for Frishberg’s craft and his sheer originality is boundless. Such humorous masterpieces as “My Attorney Bernie,” “Blizzard of Lies,” “Sweet Kentucky Ham” and “Can’t Take You No Place” are a joy to a comparatively small group that knows them. “I’m Hip” (which I first heard in a version by Blossom Dearie) is a classic that has taken on a life of its own. But Dave is not limited to laughter. His “You Are There,” written to a melody by Johnny Mandel, is a song so poignant that it is hard for a singer to get through: it will reduce him or her to tears.

Fulfilling T.S. Eliot’s dictum that poetry can communicate before it is understood, I tell Dave that I got the impression that the girl in the story was not absent, she was dead and that she was English.

Dave says, “You’re right about her being dead. But I thought of her as Irish.”

One of Frishberg’s heroes when he was coming up was Bob Dorough. Dave says: “Dorough happens to be one of the musicians I have admired most in my whole life. I’m not sure that a whole lot of people know the scope and depth of his musicianship.

“I spotted Dorough when I was in the Air Force and ran across an LP in a record store. That was 1956, maybe. I was stationed in Salt Lake City. I was in the ZCMI Department Store-the Zion Cooperative Mercantile Institute. It was a big Mormon store. They had a good record department. I saw this record, on Bethlehem. I listened to it in the booth. It had a lot of impact on me. I always thought I’d like to meet this guy. He was so hip. He sounded like a real good piano player, and I loved the arrangements he wrote.

“I’ve always been impressed by the excellence of his work. He doesn’t know how to write bad. He’s just a terrific writer, and very intent on being excellent. And in the process, he’s very thorough and explicit.

“He’s almost a mentor to me, although he certainly never adopted that posture. But that’s kind of how I felt about him. Not that he influenced my writing so much, but how he showed me that it’s okay to go for excellence.

“One of the first times I saw Dorough’s pictures was on the cover of one of the LPs he made with the Recorder Consort. He had written some music for recorder ensemble. One piece he wrote was called ‘Eons Ago Blues.'” Dave chuckles at the title and the memory.

Dorough’s memory of the start of their relationship is this: “I used to go down to the Half Note in New York when he was playing with Zoot [Sims] and Al [Cohn]. I thought, ‘Wow, nice piano.’ I had a friend in Salt Lake City, a tenor player named Bob Newman. He gave Dave my phone number and told him to look me up in New York. I was flattered, of course. We just became pals.”

Who’s on First? is the new album by Dorough and Frishberg. It’s the first they have made together, and it was recorded live at the Jazz Bakery in Los Angeles. It seems, in retrospect, to have been inevitable. It compels us to look at the similarities and the differences between the two of them:

Both are writers of odd, fascinating, off-the-wall songs that, while they may touch on the romantic, usually do so with irony. Both are excellent pianists. Both sing in offbeat fashion. I don’t think either claims to be a bel canto singer, and Frishberg, on this new album, declines to give his own “You Are There” the touching treatment I think it deserves; yet it’s still effective. Another thing they have in common is that no one else can do their humorous material as well as each of them can.

They would seem to have a direct link to Hoagie Carmichael, who also wrote a lot of eccentric songs, such as “Baltimore Oriole,” which Dorough has recorded previously (but not on this CD) and “Hong Kong Blues,” which is on Who’s on First?

Dave understands the comparison to Hoagie Carmichael. “I guess I’m closer,” he says, “Carmichael and I both being from the Midwest: him from Indiana and me from Minnesota. Dorough is more rural, coming from Arkansas. What I don’t understand is any comparison to Mose Allison.”

Dave was born in St. Paul, Minn., on March 23, 1933. He served in the Air Force, then settled in New York in 1957, working as a solo pianist-singer and then with Carmen McRae and Kai Winding. He toured with Gene Krupa, Wild Bill Davison and Ben Webster, among others, and worked in the quintet led by Al Cohn and Zoot Sims. In 1971, he moved to Los Angeles. His experience there often turns up in his songs, including the wonderful “Too Long in L.A.,” which is one of the new CD’s high points. It is a bitterly funny indictment of driving conditions in that clogged city, and anyone who has ever lived there has to double over at some of the local references. Dave is as wryly funny in conversation as he is in his songs. He says of this one:

“What I had in mind in this song is a sort of prelude to road rage-how the traffic in L.A. can turn you into a raving right-wing nutso. Traffic can mess with your politics!” (Another of his L.A. songs is the wistful “Do You Miss New York?” which isn’t on this album.)

Dorough’s country-boy manner and singing style and his ponytail hair will fool you. Born in Cherry Hill, Ark., on Dec. 12, 1923, he first studied violin and clarinet. He has an excellent academic background. He played in small groups while he was in the Army in World War II, and then went to what was then North Texas State Teacher’s College and is now North Texas University. He was, along with Herb Ellis, Barney Kessell, Jimmy Giuffre and Harry Babasin, among the first jazz-musicians-to-be to go there, although it had no jazz course at that time. He studied composition and piano. He studied further at Columbia University (1949-52), meanwhile playing in New York clubs. He lived in Paris in 1954 and ’55, working as an accompanist and music director, then returned to the United States. In 1962 he recorded with the Miles Davis Sextet.

Some of his most delightful songs were instructional jewels he wrote for the children’s television series Schoolhouse Rock. One of these songs, “Conjunction Junction,” a little grammar lesson, is done as a duet with Frishberg on this CD.

Frishberg met Dorough when he settled in New York in the late 1950s. It was then that they wrote “I’m Hip.” I reminded Dave that over that dinner a few years ago, he told me that he wrote the lyric first and Dorough set it to music.

I say, “The reason it stuck in my mind is that I find it extremely difficult to write a lyric first … ”

“Oh, me too!” Dave says emphatically.

“Yeah, you put European poetic metric figures on the words to establish a pattern, and that has nothing to do with lyric-writing.”

“You try to scan things, and it’s not the way a composer would scan it,” Dave says.

“I was always amazed not only that Bob was able to do it with that song, but do it with this humorously super-hip music like exaggerated bebop, and make it work. It’s an amazing job of setting a lyric. He is amazing,” I say.

“Yeah,” Dave laughs. “Well I’m glad I gave it to him, right? I think it was because at that point in our lives, he and I were trying to write songs together. And we weren’t having much luck, just sitting around trying to write together. We were too embarrassed to suggest anything. So then I said, ‘Let’s forget it. We can’t collaborate this way. Why don’t I just write some lyrics?’ And that’s what I did. But I’ve never done that since. All my lyrics have been written to music, except that one.”

“Johnny Mercer wouldn’t do it any other way,” I say.

Of their joint recording session, Dorough says: “We had a couple of gigs opposite each other. One we had with Blossom Dearie opposite us. That almost became an act, but it didn’t work out. But those gigs were the genesis of the CD.

“My God, what a songwriter Dave is. Working opposite him was almost overpowering. Hearing his songs over and over again in a week was astounding,” says Bob.

How much rehearsal time, I ask Dave, did it take to put together this project with the two pianos and the two voices? The answer is: Not enough.

“We did rehearse at my house before we left on our first gig, a mini-tour. We rehearsed a couple of days. It was mostly rewriting what we’d written separately. Two pianos is always hard. You gotta plan it. We didn’t do enough of that. But it sounds so cheerful that I think we get away with it. It’s benign shagginess.”

Well, the album is a little better than that. A lot better. And it’s a collaboration that will probably never happen again. Frishberg and Dorough are freestanding individuals, and they are busy with their separate careers. Dave is now 67 years sold. Bob is 10 years his senior.

And neither of them seems to be slowing up.