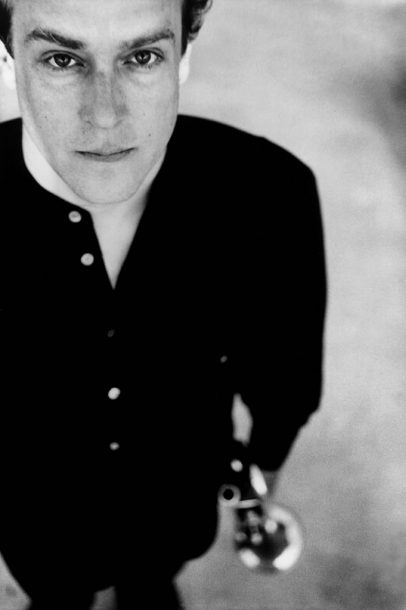 It’s after midnight in Baden-Baden, Germany, and ubiquity is starting to take its toll on Dave Douglas’ voice. The trumpeter-composer is about two-thirds of the way through “a crazy fall” of recording, touring and workshopping on both sides of the pond. After recording a set of Balkan-tinged compositions with accordionist Guy Klucevsek in New York in September, he joined pianist Myra Melford’s The Same River Twice for a two-week, 14-date European tour. He then flew back to tour his Tiny Bell Trio (with guitarist Brad Shepik and drummer Jim Black), a ten-day trek through the Northeast made challenging by an early-season blizzard in upstate New York. Douglas then made the grueling New York to Helsinki flight to perform with bassist John Lindberg’s new trio at the Tampere Jazz Happening in Finland, before traveling to the five-day New Jazz Meeting in Baden-Baden. With only a few weeks left in ’97, Douglas was far from through for the year: he still had a week of gigs with drummer Han Bennink in Holland and, upon returning to New York, a New School concert with Melford, a week’s stand at Iridium with the Sextet featured on the Wayne Shorter-inspired Stargazer (Arabesque), and “a jazz record date” with a quartet anchored by drummer Billy Hart.

It’s the type of schedule that is necessary for an experimentally oriented composer and instrumentalist like Douglas to break through the low glass ceiling created by a conformist U.S. jazz establishment. Though Douglas’ primary interest is exploring a wide range of musics with his friends, his career is nonetheless cresting towards something that resembles fame, a status only a few of his contemporaries-Don Byron, Bill Frisell and John Zorn lead the short list-have achieved, or have had foisted upon them, depending on your perspective. A large critical contingent believes him to be the best trumpeter to emerge this decade (no less than Gunther Schuller called his debut as a leader, Parallel Worlds [Soul Note], “prophetic”). He is recording for a slew of labels as diverse as Avant and Arabesque (the latter previously issued Tiny Bell Trio’s Live In Europe and will issue the debut of Douglas’ Quartet with saxophonist Chris Potter, bassist James Genus and drummer Ben Perowsky, later in ’98). Most importantly, he has developed several parallel strands in his work through several ongoing ensembles, ranging from Tiny Bell Trio, the vanguard unit of the recent Balkan music boomlet, his Sextet, the forum for his extrapolation of Shorter’s music and previously, Booker Little’s (these are not generic song book projects, as the bulk of the programs are penned by Douglas) and his String Group, which melds jazz and chamber music textures in a mostly original repertoire (plus a few plum covers of pieces by the likes of Webern, Schumann and Kirk). As a result, Douglas has the best of parallel worlds.