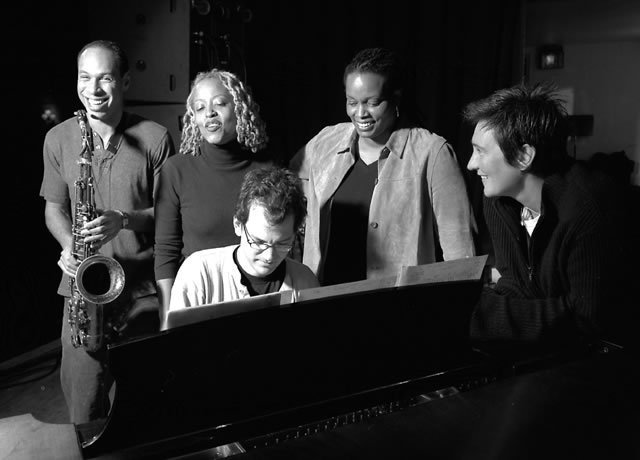 It took a while (a couple of months longer than the rock community) but the jazz community finally responded in an organized fashion to the horrors that befell New York on Sept. 11 with the devastating attack on the Twin Towers of the World Trade Center. Billed as “Made In America,” this all-star jazz benefit was intended to honor the heroes and victims of that tragedy. The gala event (tickets ranged from $65 to $150) was also the official unveiling of Jazz Alliance International, the organization of jazz industry professionals that presented the evening concert.

The fast-paced production registered more high notes than low notes, with a few surprises tossed in along the way. Joe Lovano opened the evening with a quartet featuring drummer Lewis Nash, bassist Christian McBride and pianist Jason Moran on a surging rendition of Ornette Coleman’s “Broadway Blues.” Immediately thereafter, he slipped out a side door of Town Hall to make his own gig at Birdland, just a couple of blocks away on 44th Street. Next up was vocalist Jane Monheit, who turned in a sensuous, if histrionic, reading of “Somewhere Over the Rainbow,” accompanied by Kenny Barron on piano, Ron Carter on bass, Lewis Nash on drums, Terence Blanchard on trumpet. While the confident young singer has a stunning look and a great set of pipes, she doesn’t particularly convey a jazz aesthetic either in her phrasing or attitude. She shows an impressive command of her instrument, to be sure, but is lacking that mysterious X-factor that makes, say, Betty Carter or Sheila Jordan a jazz singer. Call it sly syncopation, rhythmic daring, an organic sense of being able to internalize a song and put one’s own personal stamp on it. Or just call it plain hipness. Whatever it is, Ms. Monheit ain’t got it. Instead she comes across like a well-trained cabaret singer, or at best something along the lines of Julie London in her “jazzy” 1950s sessions for Verve with Barney Kessel and company.

A thrown-together aggregation of Nicholas Payton on trumpet, Paquito D’Rivera on clarinet and Benny Golson on tenor sax with the same regal rhythm section of bassist Carter, drummer Nash, pianist Barron turned in a spirited, if raggedy, rendition of “Yardbird Suite” before banjo virtuoso Bela Fleck took the stage to perform a dramatic solo extrapolation on “The Star Spangled Banner” that evolved into some heady Bach-like variations. Fleck then realized a jazz fantasy by playing Charlie Parker’s “Al-Leu-Cha” alongside Ron Carter, Lewis Nash and Terrence Blanchard.

Kenny Barron provided a highpoint of the marathan with Regina Carter; they generated some sparks together on their duet rendition of Thelonious Monk’s “Misterioso.” Carter’s blues-drenched violin solo was vintage Stuff Smith, drawing hoots and howls from the excited house. Cassandra Wilson, accompanied by Mark Peterson on bass, Marvin Sewell on acoustic guitar and Jeffrey Haynes on percussion, turned in a sensuous reading of Jobim’s “Waters of March.” Regina Carter and Bela Fleck joined them for a novel take on Woody Guthrie’s “This Land Is Your Land,” and once again the audience erupted following Carter’s violin solo.

Wayne Shorter received a hero’s welcome as he took the stage with his working quartet of bassist John Patitucci, pianist Danilo Perez and drummer Brian Blade, but it was Blade who stole the show with his dynamic abandon on the kit. A rare meeting of John Scofield and Michael Brecker produced a blistering version of “Chasin’ the Trane,” with bassist Patitucci and drummer Blade providing the kinetic pulse. Singer Ruben Blades teamed with pianist Danilo Perez on a highly charged duet while pop star K.D. Lang joined pianist Brad Mehldau, bassist Christian McBride, tenor saxophonist Joshua Redman and drummer Brian Blade for a dreamy take on Hoagy Carmichael’s “Skylark.” Mehldau also wowed the crowd with his virtuosic solo turn on Billy Joel’s anthemic “New York State of Mind,” which he radically reharmonized, reconstructed and otherwise filtered through his own remarkably unique pianistic sensibility.

Following a fiery workout on the old workhorse “Cherokee” by alto-sax burner Kenny Garrett, bassist McBride and drummer Greg Hutchinson, the long evening came to a rather anticlimactic close with singer Dianne Reeves doing the R&B-flavored title track from her album In Your Eyes.

Regarding the “Made In America” concert, Bruce Lundvall, president of Blue Note Records and chairman of the Jazz Alliance International, commented: “As the jazz industry organization, I believe we have an obligation to provide our artists with an opportunity to contribute their services to help a community of citizens under siege. Our industry has deep historical roots in New York City and this is our way of showing support for the entire community. “