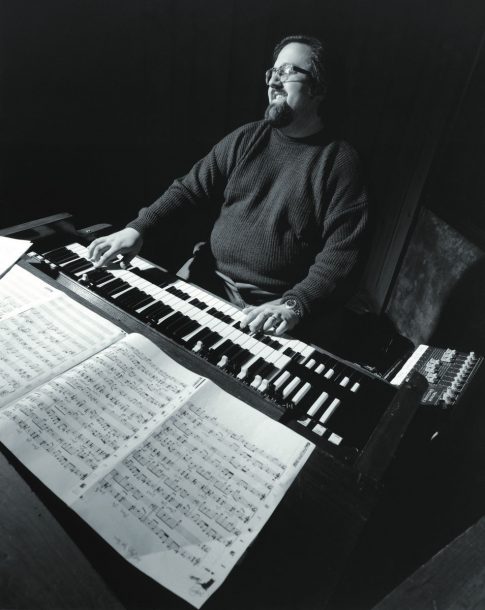 It was hardly an appropriate room for a B-3 jam. The cavernous Alice Tully Hall, a prestigious and pristine uptown space that is part of the sprawling Lincoln Center campus, lacked the kind of intimacy and necessary funk that brings out the best in Hammond B-3 organ players. But they wailed on anyway, regardless of the fact that there were no martinis or ribs on the premises.

The four featured players at this Jazz at Lincoln Center event were as individual stylistically as you can get. Joey DeFrancesco, the youngest at 30, was the burner of the bunch, flaunting lightning right hand licks and a hunger for up tempos. Jimmy McGriff, the elder statesman at 65, moved slowly and laboriously onto the stage but lit up when seated behind the hulking 400-pound beast. While McGriff’s performance was grounded deeply in the blues, Dr. Lonnie Smith was barely tethered to Earth at all. With omnipresent turban, walking stick and flowing white robes, “The Turbanator” struck an enigmatic presence while following his otherworldly muse to the stratosphere. At this point in his career, Smith is light years beyond the funk and grease he conjured up in the late ’60s and early ’70s at B-3 joints like the Key Club in Newark, Club Harlem in Atlantic City or the Club Mozambique in Detroit. These days, affecting a Sun Ra-esque pose while accompanying himself on heavenly falsetto wordless vocals, he’s dealing on more celestial turf.

The big surprise of this organ summit was Rhoda Scott, the Newark native who for the past three decades has resided in Paris. On this rare New York appearance, Scott brought a youthful enthusiasm, fiery stage presence and an earthy edge to her sizzling B-3 work.

Throughout an evening of quick and frequent set changes the players rotated sidemen, with groovemeister Idris Muhammad being the sole workhorse on drums. Rhoda Scott opened the festivities with her uptempo burner “Nova,” demonstrating some remarkably facile barefoot action on the bass pedals while accompanied by Houston Person on tenor sax, Randy Johnston on guitar and Muhammad on drums. Her rendition of Johnny Griffin’s “Sweet Sucker” really brought out her funky side while Person ate up this loping blues on his deep-toned authoritative solo. DeFrancesco was up next, unveiling his relentless right hand burn in the company of Idris and special guest guitarist Pat Martino. That potent trio was joined by tenor sax powerhouse James Carter for a smoldering rendition of Cal Massey’s “These Are Soulful Days,” a tune that Martino had recorded with organist Don Patterson back in 1971.

Smith, easily the most unpredictable player of the lot, opened his portion of the show with a dreamy, suspended-time ballad based on the chords to “Cherokee.” Accompanying him on his spacey trip were guitarist John Abercrombie, tenorman Carter, baritone saxophonist Ronnie Cuber (who played with Dr. Lonnie in George Benson’s quartet back in the mid-’60s) and ever-present drummer Muhammad. At one point during the dynamic peak of this extended extrapolation, Smith launched into some cathartic screaming into the microphone, which caused some in the audience to wonder if his turban was wrapped too tight. But the good doctor came back down to earth on the N’awlins second-line groover “Play It Back.”

The most satisfying moment of the first set came when Scott and DeFranceso joined together with Person, Carter, Idris and guitarist Randy Johnston for a soulfully swinging version of Ellington’s “In a Mellow Tone.” Rhoda played it loose and highly syncopated here while Joey pulled out all the stops-literally-and launched into a show-stopping solo. The first set ended with a rousing “St. Thomas” led by the ailing McGriff and featuring fine solo contributions from Martino, Carter, Person, Cuber and Johnston.

The second set opened with the Turbanator and DeFrancesco seated at matching B-3s on opposite ends of the stage. Smith acknowledged the inevitable by announcing to the audience, “I smell a duel!” What followed was an extended extrapolation on John Coltrane’s “Impressions,” with each organist staking out his territory. While Dr. Lonnie’s choices on the keyboard were frequently mysterioso, Joey’s were strictly virtuoso. While Smith boldly followed his instincts into some wild stream of consciousness flights that were playfully unpredictable, DeFrancesco relied on his unrelenting right hand technique to wow the crowd. Guitarists Abercrombie and Martino along with bari burner Cuber added some heat to this duel.

The marathon ended on a high note with all four organists joining in with the entire cast on a rousing rendition of “Rock Candy” as a kind of homage to the late B-3 great Jack McDuff (who passed away earlier this year). DeFrancesco and McGriff shared one bench while Rhoda Scott occupied another. Dr. Lonnie was content to scat along to this jam from a vocal mic stage left as Joey engaged the cultist crowd in some rhythmic clap-along. And through it all, the usually dour Martino was grinning from ear to ear, maybe recalling the glory years when the Hammond B-3 reigned supreme.