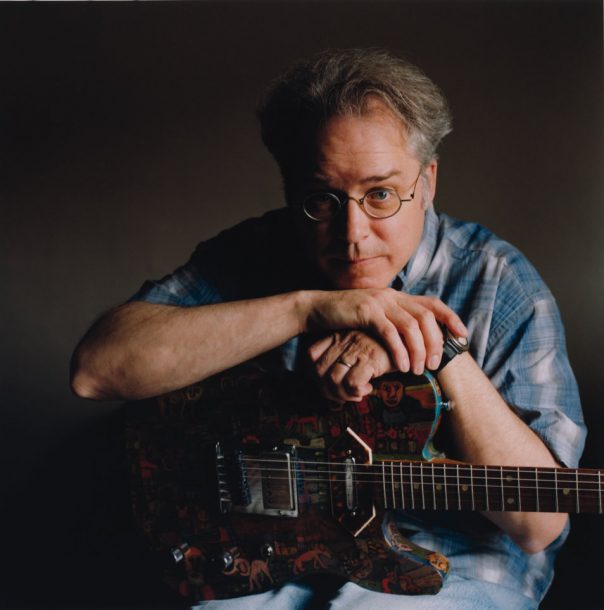 This artistic collaboration, commissioned by Arts at St. Ann’s, brought together two kindred spirits whose highly individualistic, often quirky expressions can turn on a dime from whimsical and giddy to darkly disturbing. Guitarist Bill Frisell and cartoonist Jim Woodring are indeed simpatico in a very mysterioso sense. As Frisell wrote in the program notes of Woodring (who did the humorously surreal cover art for the guitarist’s 1998 Nonesuch offering Gone, Just Like a Train): “I feel a connection with him-a kind of common quest for something-that I’ve found in only a handful of musicians. His work comes real close to bringing up to the surface a world of things that are hidden, buried things you can only see in dreams.”

This cutting edge audio-visual collaboration drew hordes of art couples from Manhattan and nearby Park Slope to the formerly desolate industrial waterfront area In Brooklyn that in recent years has become identified as the burgeoning new art scene known as Dumbo (Down Under the Manhattan Bridge), an alternative to the more established and self-consciously chic SoHo (SOuth of HOuston Street). Among those hipsters in attendance on Saturday night was New York’s preeminent art couple, Lou Reed and Laurie Anderson. The event itself was in some ways reminiscent of Anderson’s own performances, which artfully combine minimalist music cues with disturbing yet thought-provoking words and images projected onto giant screens behind her. With Frisell, trumpeter Ron Miles and violinist Jenny Scheinman setting a delicate, chamberlike tone on Frisell’s deliberate compositions, Woodring’s remarkable black and white charcoal drawings were projected onto a huge screen in St. Ann’s grand, newly established performance space on the Brooklyn waterfront in the heart of Dumbo.

Woodring’s work seems to be equally influenced by the tortured, twisted imagery of Hieronymus Bosch, the mind-boggling constructions of M.C. Escher and the wacky, subversive cartooning of Max Fleischer. (Indeed, after the performance Woodring did admit a certain obsession while growing up for one particularly bizarre Betty Boop cartoon from the early 1930s called “Bimbo’s Initiation”). Woodring also seems to favor frog imagery, which he used to both humorous and harrowing effect throughout the piece. His phantasmagorical vision is a place where the comical lies side-by-side with the unspeakable, where a cute frog prince in human clothes lies murdered with an arrow through his heart, where outrageous Yellow Submarine-like beasts slay each other with malevolent grins on their clownish faces, where delicate snowflakes slowly morph into frightening death masks. That theme struck home again and again as “Mysterio Simpatico” unraveled: what appears to be harmless turns out to be deadly.

Frisell’s accompanying score was typically enigmatic, blending the heartland sensibilities of country, blues and bluegrass with jazz improvisation and touches of Copland, Ives and Stravinsky. Brandishing a new ax (a Fender Jaguar neck grafted onto an ornately painted Fender Telecaster body), Frisell shifted gears from simple, naive themes that might’ve fit more comfortably with the pastoral aesthetic of painters like Grant Wood or Thomas Hart Benton to edgier excursions that suggested a much darker undercurrent.

“Mysterio Simpatico” was the third work that Arts at St. Ann’s has commissioned Frisell to undertake, following two acclaimed scores he composed for Buster Keaton films (which were subsequently released as two separate soundtrack recordings on Nonesuch).