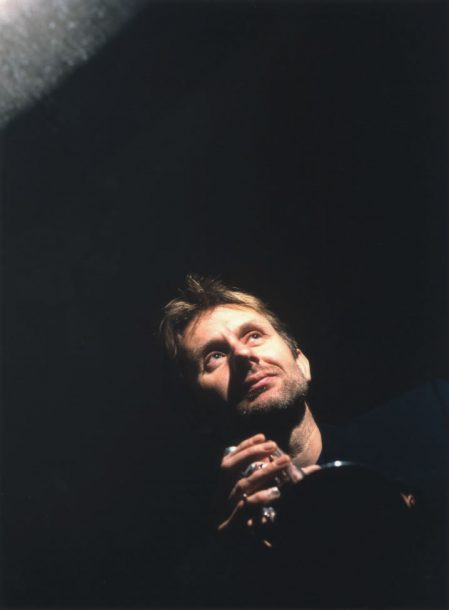 For many trumpeters who delve into electronica-inspired grooves, it seems almost involuntary for them to mimic Miles Davis or quote “All Blues” or “Jean Pierre.” But a few, like Erik Truffaz, are slowly learning how to incorporate Miles’ vast vocabulary and come up with their own musical narratives, even if those stories aren’t always entirely compelling.

The highly celebrated Truffaz showed signs of finally coming into his own at this French Embassy concert in Washington, D.C. Animating his arid, vibratoless tone with pensive cries and languid lines, Truffaz sounded like a trumpeter touched by Miles’ influences, especially when he glided over burnished guitar chords and scattering rhythms, or pointed his horn’s bell toward his chest to evoke a sense of guarded intimacy. But if you listen carefully, both live and on his new CD, Mantis (Blue Note), you’ll hear that Truffaz plays far more notes than Miles and that his tone is closer to Herb Alpert’s that Davis’.

Although Truffaz didn’t bring Mantis’ vocalist Mounir Troudi or oud player Anouar Brahem with him, the band mostly realized Truffaz’s musical vision. Backed by Michel Benita’s rich acoustic bass, Phillipe Garcia’s formidable drumming and Manu Codjia’s shimmering guitar chords and licks, Truffaz constructed evocative soundscapes with skittering textures underneath. Never sounding unnerved, even during Garcia’s most intense outbursts or Codjia’s squalling wails, Truffaz’s playing remained the calm focal point throughout. At times, however, Truffaz’s sparse, understated melodies approached lifelessness, especially on tunes like “Mantis” and “The Point” where his paper-thin tone was swept away by the band’s hurricane of ricocheting beats, bass reverb and stabbing guitar chords. The concert took a bad turn with “Parlophone,” where the band engaged in a monotonous, trancelike dirge. With Garcia mumbling and doing some beat-box effects through a megaphone and Codjia, Truffaz and Benita laying down glassy harmonies, interspersed with electronic bleeps and blips, the seven-minute excursion felt like an eternity. The experiment may have gone over better in a dance club, but in the French Embassy auditorium the blessed-out ambient grooves sounded as appropriate as, say, Kraftwerk at the Grand Ole Opry.

Truffaz was at his best when he engaged in gentle duet with Codjia on a Serge Gainsbourg ballad. Here, Codjia gracefully caressed Truffaz’s fragile melody lines with flickering notes or strumming cushiony harmonic clouds to give the song a sense of buoyancy.

Thankfully, there were no “All Blues” quotes the whole night.