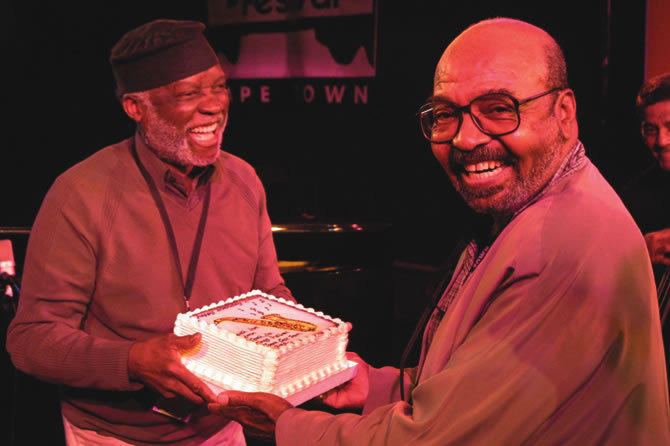 The North Sea Jazz Festival is typically held in July each year in the Hague, but it’s no longer merely an event on the European jazz calendar; it’s an international brand that has placed its stamp on Cape Town in South Africa over the last three years. Thousands of miles away from its birthplace in Holland, the North Sea Jazz Festival-Cape Town drew thousands of revelers to the sweltering southern tip of Africa at the end of March.

North Sea Jazz Festival-Cape Town is the largest jazz event on the continent. But if the location was remote, the talent was still off the top-shelf. The bigger names, such as Erykah Badu, James Moody, George Duke, Toots Thielemans, Ahmad Jamal, Spyro Gyra and Tower of Power, all jostled for the attention of the 22,000-strong audience who frantically scrambled to catch as much of the action from the four stages as they could.

R&B crooner Badu might have headlined the festival, but it was the Belgian-born harmonica genius Toots Thielemans who stole the show. From the outset, Thielemans enraptured the African audiences, thrilling all with the velvet-smooth command that he exercised over his instrument. Thielemans was due to play two consecutive sets on the second night of the engagement, with an hour-long break in between the evening’s shows to recharge. But charged by the obvious adoration of the exultant crowd, the legendary harmonica exponent played straight through both sets without a break, deftly teasing memories with the haunting solo used in the film Midnight Cowboy, altering the mood with the weepy track used to underpin the French celluloid masterpiece Jean de Florette and even ripping out his rendition of “What a Wonderful World.” The Belgian master declared he was born “jazz positive,” and on the evidence of his Cape Town performance the diagnosis is on the mark.

Ahmad Jamal and James Moody were two of the other star turns. Hundreds of eager fans squeezed into every corner of a petite hall to witness Jamal’s piano solos infuse color into the otherwise drab surroundings of the Rosie’s stage. 1940s bebop pioneer Moody was equally inspiring, trotting out his trademark “Moody’s Mood for Love” to giddy delight from the wide-eyed and rapturous African audiences. The reedman meshed perfectly with pianist Sammy Hartman and the bassist Basil Moses to produce a tight set that ran the gamut over Moody’s sparkling career.

If Thielemans, Moody and Jamal dazzled audiences under the African moonlight, Erykah Badu was less than inspiring. When the ethereal singer finally appeared on stage at 1 a.m. on the last night, the audience was expecting a rousing finale to the two-day festival. Instead, the Texas-born soul diva shunned the upbeat nu-jazz/hip-hop tracks from her repertoire, opting to indulge the deep-soul ballads that had crowds peering into their bourbon instead of on their feet and chanting.

Badu adrenalized the set to some extent when the man in her life, rap sensation Common, joined her on stage about 50 minutes into her set, but it was really only for her encore that the crowd came alive. For the final track of the festival, Badu roused the hitherto bemused audience with “Bag Lady,” prowling the stage with a resplendent fuck-you-get-up-and-boogie attitude worthy of the most blue-blooded of the hip-hop aristocracy, bouncing her impossibly powerful vocals off the African-themed tapestries adorning the Kippies main stage and even wrapping-up her extensions to allow for a theatrical stage-dive into the animated throng of hands eager to hold aloft the waiflike star. Pity the other 90 minutes couldn’t have been more like that. Especially given the $75,000 performance fee her headline performance reportedly commanded.

In truth, many of the other foreign acts who played-notably George Duke, Spyro Gyra, Kenny Lattimore, who performed with new wife Chante Moore, and Tower of Power-engaged their audiences to a greater extent than Badu, although her name was undoubtedly a key-factor in luring the sell-out crowds through the gates. The foreign acts also provided the Cape Town festival with an international flair, but organizers went out of their way to ensure that an African theme permeated all corners of the Good Hope Centre venue and that the local acts thrived in the spotlight.

Prior to Badu on the main stage, for example, the experimental percussion outfit PedXulu performed for the first time in front of an audience of this magnitude. The group is a new concept aiming to combine the sound of three different southern African ethnic tribal groups, the Zulu, the Xhosa and the Pedi tribes. Despite making an all-too-brief 45-minute cameo appearance, the new outfit showcased a distinctive African tribal heartbeat, resplendent with heavy hypnotic drums overlaid with the haunting vocals one would expect to resonate throughout the most rural of valleys in southern Africa.

PedXulu were not the only standout African performers. South African trumpeter Hugh Masekela has played in all three of Cape Town’s North Sea events and this year he collaborated with Roy Hargrove. Masekela raised the ceiling with such deft work that it underlined just what his home country missed out on during his 30-year self-imposed exile in the U.S. during the apartheid years. Indeed, James Moody interrupted a press conference to praise “Bra Hugh” as “the man I’ve always listened to, the man who makes me want to be a jazz musician.”

While the established names displayed their craft on the main stages, the sweaty basement in Cape Town’s Good Hope Centre hosted the nu-jazz acts, typically blending breakbeat, hip-hop, rap and acid-jazz tunes. Daniel Kuffer and Erik Truffaz gave the most electrifying of these “underground” performances, but the ravishing Martinez Move wove a web of complex synth lines into a smooth and captivating hour-long set, while the hip-hop-oriented South African Max Normal appeared the most accomplished of the younger local musicians.

The Hague might have given birth to it, but Cape Town has woven a richly colored African thread into the international tapestry of the North Sea Jazz Festival. Indeed, Rashid Lombard says that based on the accomplishment of the South Africa event, the Dutch organizers have now decided to extend the brand one step further with a third yearly North Sea event scheduled to be introduced next year in the United Kingdom.