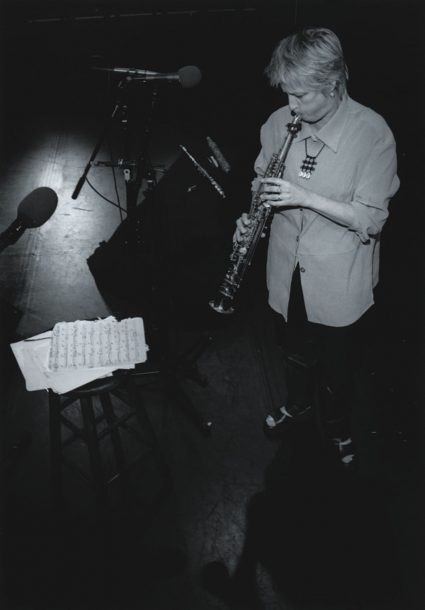 SFJAZZ, the organization behind the San Francisco Jazz Festival and the SFJAZZ Spring Season, has clearly established itself as one of the world’s premier presenters of this music.

The Spring Season, which kicked off this past week and runs into June, provides a case study in building and maintaining a relationship with an audience that includes listeners from all over the Bay Area as well as the many visitors to San Francisco. The season includes a number of thematic clusters, including a tribute to Sonny Rollins and this week’s focus on jazz women.

The “Women in Jazz” programming put it all together, establishing a tone of inquiry and historical consciousness with a panel discussion led by Angela Davis and a retrospective of jazz women on film. Then came the music, with no punches pulled. Standard fare for festivals is packaged music, by and large, with big name acts, no sharp edges, nothing too anything. Not here. Joshua Redman, the artistic director for SFJAZZ, gathered a forward-thinking collection of artists for the Spring Season of concerts.

This small, architecturally edgy hall proved perfect for an evening of music that was not so much challenging as gently exploratory. Drummer Susie Ibarra brought her quartet on first, with Angie Sanchez on piano, Trevor Dunn on bass and Gregory Tardy on tenor sax. Their first notes seemed to place the band squarely in Coltrane space: arco pedal in the bass, cascades and splashes of color behind Tardy’s priestly ruminations, leading up to a loping 6/8 that gave everyone room to stretch. They ended up in Trane space as well, with an engaging version of Bacharach’s “What the World Needs Now Is Love,” very much in the spirit of “My Favorite Things.” In between Sanchez demonstrated a style rooted in building variations of melodic fragments, and Dunn showed great dexterity and a fine sense of line. Tardy was strong throughout, unencumbered by cliché, and Ibarra’s crisp, top-of-the-beat approach provided a smooth running commentary. Indeed, Ibarra’s playing, surprisingly “inside,” characterizes the band’s performance as a whole: focused energy, fully exploring the territory mapped out by the compositions but not going beyond.

Gary Peacock was ill and couldn’t make the trip to San Francisco, so pianist Crispell and drummer Paul Motian recruited Mark Helias to fill the bass chair. The trade-off, one imagines, gives up the near-telepathy linking the more practiced trio for the alertness and discovery the “outsider” brings to the proceedings. Though the set felt largely like a conversation among peers, it was an ordered conversation, with composed sections balancing freer improvisation, all couched in terms of extraordinary virtuosity. There were several extrovert assaults on the keyboard of the sort that have won Crispell comparison to Cecil Taylor, seeming to grow organically from the trio interplay; for the most part, though, she was about creating trio texture, allowing the counterpoint, whether composed or extemporaneous, to have its say. Motian was brilliant, as usual, his half-danced playing always advancing the cause: here a shimmer, there a subtle push, an elliptical groove. But somehow, Helias was at the center of things this evening, as comfortable and supportive in the composed stretches as stretching out on his own.

I have been involved in one way or another with the jazz repertory movement for more than 25 years now. Seldom have I heard such a convincing argument for the delights of plumbing the past than the first half of this program, in which Schneider and Jensen took us on an involving tour of the Gil Evans/Miles Davis suite on “Porgy and Bess.” Playing from the original parts, which miraculously surfaced only a few years ago, Schneider’s orchestra made us intensely aware of the depth of these arrangements, allowed us to revel in the detail of 22 pieces moving in close-order. Jensen covered Miles quite beautifully, despite an ongoing bit of wrestling with her Harmon mute that often put her lines a bit too close to Evans’ rich background fabric.

The second half of the evening drew from Schneider’s own book, opening with a piece inspired by a Paul Klee painting, “Dance, You Monster, to My Soft Song.” The piece, built on a wonderfully tilted ostinato, is a good example of the way Schneider balances the resources of the band: the main sections frame a B strain that essentially gives soloists and rhythm section a bit of space in which to work. The return of the A strain brought Jensen to full creative power, blasting through with her strongest, most realized solo of the night. The band tripped merrily through the mellow strains of “Allegresse,” and took on the imposing (even without words) setting of “Strange Fruit” that Schneider had down for the Carnegie Hall Jazz Band. “Hang Gliding” featured Jensen and tenorist Charlie McCarthy working over a 6+5 rhythmic feel that still felt smooth throughout.

San Francisco was the first stop on Cassandra Wilson’s tour in support of her new CD, Belly of the Sun. Wilson seems intent on maintaining her mystique, on allowing the familiar and the enigmatic to have their respective places in her music. Perhaps the largest mystery is why it doesn’t work better. The ingredients certainly seem to be in place and in proportion: there is a fine quartet, built around the fingerstylings of Marvin Sewell’s acoustic guitar and the hand percussion of Jeffrey Haynes. Bassist Mark Peterson’s sound was perhaps a bit logy, but his support of the material was exemplary. Kevin Breit provided blazes of color and texture with a variety of guitars and electric mandolin (note to Kevin: hire a guitar tech to tune your instruments out of the audience’s hearing). And, of course, the voice: Wilson’s contralto is among the most beautiful sonic vessels ever to emerge from a human being, like a deeper revision of Roberta Flack. And to be sure, there were some marvelous moments in the course of the show: Robbie Robertson’s “The Weight” is a wonderful vehicle for Wilson, in an almost discursive style. “Just Another Parade” and “Justice” were served up deliciously on wry; the raucous character of “Drunk As Cooter Brown” was balanced by the exquisite hush of Jobim’s “Corcovado,” the evening’s highlight. But “Wichita Lineman” seemed disconnected from the story it tells, and Dylan’s “Shelter From the Storm” was more an exercise in recollection of the lyrics than interpretation of them. “I Wished on the Moon” found Wilson sounding like she wished she were Betty Carter. It seems that she is trying to be too many things, to too many audiences. What is perhaps most exciting, in thinking about the phenomenon that is Cassandra Wilson, is thinking about what she may accomplish when she has a more settled sense of herself as an artist.

Jane Bunnett and Spirits of Havana

Two very different approaches to the soprano saxophone were represented here, to grand effect. Jane Ira Bloom led off with a quartet comprising Vincent Bourgeyx on piano, Mark Dresser on bass and Bobby Previte on drums. Her penchant for naming compositions (e.g., “Blue Poles”) after Jackson Pollock paintings is perhaps misleading: for all its freedom, her writing has far more rigor than Pollock’s style of “action painting.” But there is plenty of action on stage with this band: Bloom is a highly animated player, and Previte’s taut presence behind the traps helps sustain a sense of anticipation. Dresser and Previte are a remarkable pairing, stretching the rhythmic and harmonic context without ever breaking it. But it’s Bloom’s band: her compositions set the stage, and her playing, arcing off from Wayne Shorter’s elliptical style, sets the tone and truly leads the way down some very interesting paths.

Jane Bunnett’s fascination with the sounds of Cuba has served her and her audiences well: she crafts an always-entertaining blend of straightahead improvisation over the exhilarating drive of her band, anchored by pianist Hilario Duran, with the fluent bass work of Roberto Occhipinto and the fireworks of drummer Diego Lopez and Roman Ogduardo Diaz and Pedro Martinez Campos on congas. The energy level never dropped: even when the dynamics and tempo came down came down, the musical tension remained high. Bunnett is a very accomplished player, but she is hard pressed to keep up with his crowd. Her finest moments came in her unaccompanied introduction to “Santos Suarez” and her flute work on “Joyful Noise. For “Drume Negrita,” the three drummers all took up bata drums, establishing a fine counterpoint before dispersing to traps, congas and timbales, returning to the batas to close out the piece.