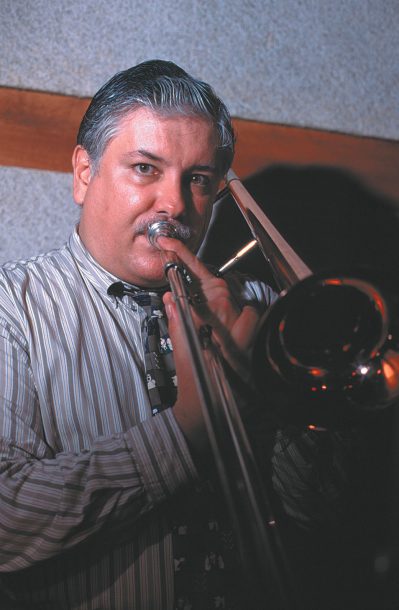 Misprints, mistakes and misquotes have plagued musicians ever since jazz itself was first referred to in Variety as “jass” in 1916. Marquees, program notes, press releases and liner copy frequently misspell names or distort biographical data. Dan Barrett has been victimized, but the trombonist is so laid back he just lets them slide-appropriately enough.

During a call from Switzerland-he was appearing at the Ascona Jazz Festival and had a bunch of gigs lined up in Italy, to be followed by another festival in France-Barrett reacted to a listing in an Internet database claiming he had played with Benny Goodman in 1955-the year Dan was born in Pasadena, Calif. “Must be a misprint. I played in Goodman’s last band, from ’85 till his death in ’86, and Yale University released albums that go back to 1955. I saw some program notes claiming I had played with King Oliver. The only connection there is I’ve played the music of King Oliver.”

Barrett has been listed as musical director of Arbors Records, for whom he has done close to 40 albums since the early ’90s, including the new Melody in Swing and A Portrait of Duke, his tribute to Ellington with reedist Frank Roberscheuten. “That’s an informal title [owner] Mat Domber bestowed on me. He seeks my advice occasionally and takes it infrequently.” Finally he cleared up his listing as playing cello on at least nine albums. “That’s Daniel Barrett, a cellist in New York. We often got each other’s mail when I was living there.”

No mistake about his style being described as swing and Dixieland. As The New York Times’ John S. Wilson described Barrett: “A melodist, a colorist who knows how to use a plunger mute with taste…a player Duke Ellington would have loved.”

“Critics put labels on everything,” says Barrett. “We’re the ones who just play music and try to swing. I’d call myself a prebopper. I love to hear [Charlie] Parker, or any good musician, but the guys from the swing era, and before, resonate deeper with me.

“It’s all the language of music. I just don’t speak the [Parker] dialect as fluently as other dialects. I try to sing through my horn, like [Johnny] Hodges, [Ben] Webster and especially [Louis] Armstrong.” As with Satchmo and Jack Teagarden, Barrett’s singing voice is a pleasing extension of his horn; both can be heard on the recent Dan Barrett’s International Swing Party (Nagel-Heyer). His horn is an extension of his lifelong love affair with the so-called Great American Songbook.

Which led naturally to valve trombone. Did Barrett ever play it? “Yes, on the sound track of The Cotton Club. And that segued to more soundtrack credits: Brighton Beach Memoirs, Mighty Aphrodite, Everyone Says I Love You and Bullets Over Broadway, which includes Barrett’s first on-screen cameo, as (surprise) a trombonist. His second on-screen appearance was in a documentary of the Woody Allen Jazz Band’s 1996 European tour, Wild Man Blues. Barrett also composed and arranged the theme for the American Playhouse TV production of Rocket to the Moon.

Barrett is extremely pleased about Blue Swing, his 9-piece band that includes singer Rebecca Kilgore, and last year’s self-titled debut CD on Arbors. He’s equally pleased about a trio called BED, based on first names: “B for Becky, E for guitarist Eddie Erickson, and D for Dan, and we’re completing that album.”

But what he brags about most are jazz bears!

No, Barrett isn’t going through second childhood. He wrote five songs for a full-length cartoon about bears that play jazz in the forest called Being a Bear: Jazz for the Whole Family. The soundtrack CD came on Arbors in 2000; the cartoon is in production by a Canadian company.

Not surprisingly Barrett is quite content, something his playing reflects. He and his family-wife Laura and a 13-year-old son, Andy, who plays ragtime piano-are back in Southern California after their nearly two-decade stay in NYC. “The only problem is I’m still away for extended periods.”

Such is the price for virtuosity. And that’s not a misprint.