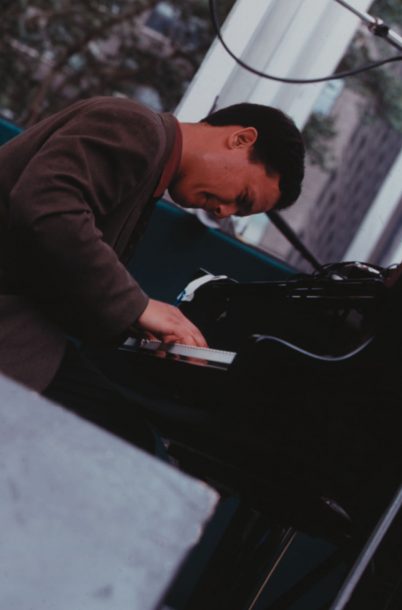 In his new two-volume series of recordings, Paired Down, Canadian-born pianist D.D. Jackson issued his own musical manifesto about the health of jazz approaching the millennium. He brought a total of nine admired musicians into a New York studio to make music one-on-one. While some listeners may consider the duo format to be among the most challenging in jazz, this Don Pullen protege takes a different view.

“With the duo, you have maximum freedom and the injection of information with people you are playing with. It is my preferred method of conceptual expression because the piano is not a support instrument. You try to be interactive and do what is required of the musical situation,” Jackson said.

On Paired Down, Vol. I, released this summer on Justin Time, Jackson took that approach with each of his guests: James Carter on C melody and tenor saxophones, trumpeter Hugh Ragin, bassist Santi Debriano, baritone saxophonist Hamiet Bluiett, violinist Billy Bang and David Murray on tenor. Paired Down, Vol. II, due this fall, pairs him with Bang, Murray, Debriano, Don Byron, Jane Bunnett and Ray Anderson.

The sessions are a departure from his two previous Justin Time recordings, Peace-Song and Rhythm-Dance, which consisted of all-original material in trio and quartet settings.

“There is a tendency for me to be typecast as an energetic, keyboard-splintering pianist. This allowed me to explore more the interactive and introspective side of my nature,” Jackson said. “I chose people who you just cannot mistake for anybody else.”

The classically-trained Jackson, 30, said he sought out artists who share the belief that individuality has been lost among the hype in this age of so-called “young lions.”

“People are so intoxicated by the money that is thrown at them,” he says. ” The value system that I thought jazz was all about-a forward-looking music that reflected tradition -has become lost because of the clone mentality. People sound very much the same and it is hard to tell who is who. That is the general vibe I have felt and with whom the people I work have felt. Composition has also been de-emphasized. People have tended to write in a narrow way, imitating the bebop tradition, or rewriting standards.”

Tipping his hat to Billy Bang, another wide-ranging explorer, Jackson refers to all of the music made with his nine duo partners as “Bang Music.” In other words, music on the edge-and beyond categorization. “It means creating a true original body of work and form of expression, an original voice,” he said. “They are at the top of that. I feel more people should be exposed to these great artists.”