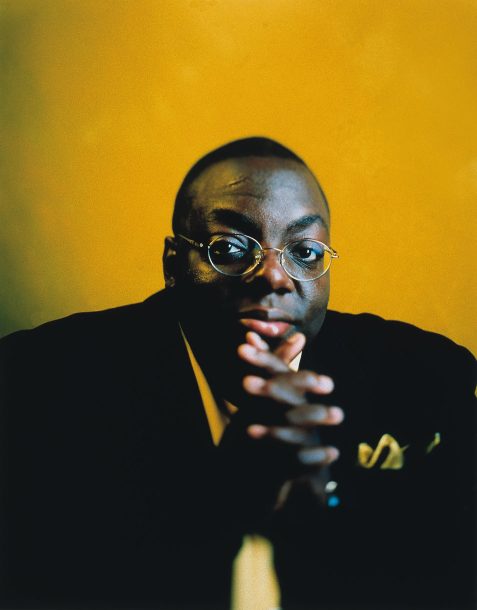 One of the highlights of last summer’s Montreal Jazz Festival was the engaging, swinging duets performed by Cyrus Chestnut and his pianistic colleague Benny Green. The two struck an instant rapport on this, their first, encounter. In the intimate setting of Salle de Gesu, an acoustically brilliant space located in an ancient-looking church in the heart of this sprawling urban festival, they carried on in that very elegant and grand tradition of Oscar Peterson and Wynton Kelly. This strictly ballads-and-standards gig was but one side of Chestnut’s musical makeup, and certainly one he holds dear. But while he reveres the tradition, Cyrus is also eager to step outside the confines of Young Lionhood and do something a little different.

“Maybe I try too hard to be different,” says Chestnut, “but it’s important for me to not do the same thing. I don’t like hearing ‘as usual,’ as in ‘You sound good as usual.’ That kind of tells me that I haven’t done anything different. Inasmuch as I appreciate people digging the music, if you hear me once, the next time you hear me my hope is that it will be a little different from what you heard before. If it sounds the same then I’m in trouble.”

It was in that spirit of stretching that Chestnut tackled the Hammond B-3 organ on saxophonist James Carter’s last Atlantic release, In Carterian Fashion. He did one gig with Carter on that hulking instrument, at the Montreal Jazz Festival the night after his intimate duet with Benny Green. That hit with the sax titan took Chestnut back to his days at the Berklee College of Music. “When I was going to Berklee,” he recalls of his stint in the early ’80s, “there was a place called Wally’s Cafe that had a B-3. I would play there from ten at night until two in the morning for $15, then go home with my clothes filled with smoke. So yes, I am intimately acquainted with the B-3.”

On his own self-titled album, his fifth for Atlantic, Chesnut plays no B-3 but he does try something different, this time in the form of two vocal tracks with R&B chanteuse Anita Baker, who lends her soulful, sultry voice to a pair of standards, Rodgers & Hammerstein’s “My Favorite Things” and George & Ira Gershwin’s “Summertime.”

“My hope for this record was that everybody who came in for the session simply did what they did…they didn’t have to try hard to be any one way but simply bring themselves and offer themselves to this recording. Anita Baker came in and was Anita. And we just basically did what we did behind her. And the result is what you hear.”

“Summertime” also marks Chestnut’s debut recording on electric piano. “I used to play Fender Rhodes a whole lot,” he says. “I actually had this idea of doing a whole record on Fender Rhodes. Maybe I’ll get to that one day. But it offered something a little different this time around. Maybe some will say doing that takes away from a focus, so to speak. But there’s many facets to Cyrus Chestnut and I just like to share them. To just sit down and play in the Bud Powell style for a whole record or a whole set…I don’t think that would be giving audieces a fair representation of what I’m about. And so when I sit down at the piano I want to be able to draw from many different sources. In performance, you’re liable to hear anything from Fats Waller to Stevie Wonder to Thomas A. Dorsey. It’s all based on the way I feel. I just do what I like.”

On the highly eclectic Cyrus Chestnut, the pianist showcases an exquisite touch on his jazz waltz “Elegant Flower,” indulges in swaggering, two-fisted stride on the unaccompanied “Nutman’s Invention #2,” exudes a soulful bounce on the sassy “Miss Thing,” and holds his own alongside firebreathers Carter and Joe Lovano on the urgently swinging closer, “Sharp.” The album’s other unaccompanied piano piece, the introspective and peaceful “Great Is Thy Faithfulness,” is a bridge to 1997’s Blessed Quietness: A Collection of Hymns, Spirituals and Carols, while “Strolling in Central Park,” a whimsical piece underscored by Billy Higgins’ alluring brushwork, shows a more romantic side to the man. From beginning to end, each of the events on Cyrus Chestnut is charged with passion and musicality.

“With this particular record I was really just trying to focus on musicality, where the compositions don’t sound like they’re just exercises,” says the Baltimore native and Bronx resident. “You know how sometimes you can listen to music and it sounds like formulas or a whole chain of motifs just strung together. It sounds more like a technical exercise or like a person just sticking out their chest and showing off all of the information that he or she may know. But that doesn’t really interest me. I listen to the great pioneers of this music and hear all the hip stuff that they did, and it’s all incredibly musical. The melodies are singable whether simple or complex. So I’m trying really hard now to just make everything I do, whether it’s simple or complex, sound musical without selling out skill. It’s like Betty Carter would say…you wanna win people over with skill and mastery, playing good music.”

The topic of the late Betty Carter hits home with a profound heaviness for Chestnut, who had a two-year tenure with the singer before launching his solo career in 1994 with Revelation. “I experienced a lot of learning and a lot of good times with Betty,” he says. “I’m happy that I had the opportunity to be one of the alumni of her school. Just as some of the cats talk about being grateful for having the chance of being in Art Blakey’s school, Betty’s school was also an important school as well. Buhaina’s school was kinda like the horn players school, really, even though several great pianists did go through Buhaina’s school. But Betty’s was just a straight up rhythm section school. She taught you how to listen, she taught you how to concentrate, to adapt….play loud, play soft, play fast, play slow and then dead slow. We used to do ‘What’s New’…oh my goodness! She would call the tempos so slow the 16th notes felt like quarter notes.

“Basically, Betty knew what she wanted,” he continues. “And she would get it from you one way or the other. She was determined to do it her own way. When people in the industry thought things was supposed to be a certain way Betty said, ‘No, it’s got to be my way or else I ain’t doing it.’ She was a true individualist and a true artist. And she built her audience the old-fashioned way, one audience at a time.”

Chestnut has equal admiration for Higgins, who with Ron Carter made up a regal rhythm section for Cyrus Chestnut. “Billy has such a strong and sweet spirit about him, and when he sits down to play all of the joy and love and happiness comes out. And this is the kind of thing I really came away from that recording session with, feeling the need of making sure that everything I play from now on has a strong sense of emotion, that strong spirit of love and happiness in it as well as mastery.”

On each of the tunes from Cyrus Chestnut, the artist seeks to tell a story. On the gentle “Elegant Flower,” he skillfully tells the story of his 18-month-old daughter Jazz’min. “Mothers Blues” is about the plight of a Mom dealing with the terrible twos syndrome. His turbulent mini-suite, “The Journey,” subtitled “One Day in the Life,” is about the struggles of getting to the gig in order to savor a few moments of total joy and freedom on the bandstand. “I think music should tell stories, in skillful ways,” he says. “I’m not talking about just playing backbeats and motifs, you know? I mean, you got enough of that. And for those who feel that in their hearts, god bless’em. But I think an artist should be true to his or her craft. And having gone through the school of Betty Carter, it’s kind of just in me…if I’m gonna win people over, I gotta do it with skill.”

Not one to short-sell himself, Chestnut is setting his sights high for the future. “I want to be able to get to grand multitudes of people without compromising what I do, not feeling like I have to add this and that but simply by doing it on my own,” he says. “If I could fill a place like Carnegie Hall or Avery Fisher Hall, I think I would then be able to seriously pat myself on the back. Or…shoot, Madison Square Garden! The whole place sold out coming to see Cyrus Chestnut do what Cyrus Chestnut does.

“I just have the need to achieve,” he laughs, considering the grandiose scale of his dream. “And I want to be able do it like the Frank Sinatra song says…’I did it my way.’ Maybe that’s one of the things I really got from Betty too, just the importance of being an individual and sticking to your vision.”

His piano of choice is a Hamburg Steinway. His piano at home is a 1934 Knabe.

Ron Carter: The Bass and I (Blue Note)