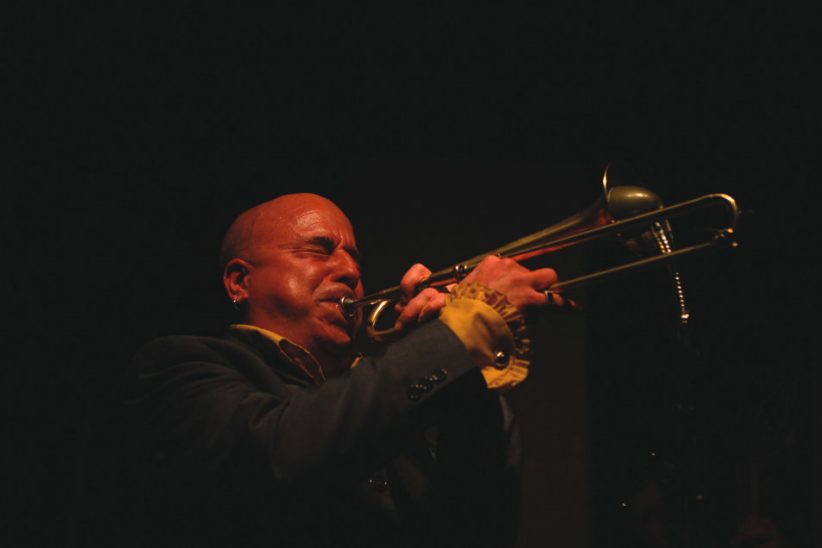 From the stage at Symphony Space, pianist/vibraphonist Karl Berger wondered aloud: If he mentioned Creative Music Studio (CMS), the entity being celebrated this evening, would people know what he was talking about? It may still be one of the more obscure corners of the jazz universe, but CMS has had a major impact on improvising musicians across several generations. Part school, part artist colony, part performance space, CMS operated in Woodstock, N.Y. during the ’70s and ’80s and hosted many musical giants in the making, including Dave Holland, Sam Rivers, Anthony Braxton and Frederic Rzewski. Hours and hours of recordings were made at various CMS sites; the CMS Archive Project is digitizing the tapes with the intention of returning them to the artists (and storing them at Columbia University’s Center for Jazz Studies). This concert, more than just an homage to CMS and its ongoing legacy, was a way to raise funds for the archiving effort.

If Berger, a CMS cofounder and guiding light, was able to convey a sense of its historical import (Ben Ratliff helped with this http://www.nytimes.com/2008/10/22/arts/music/22berger.html?_r=1&scp=1&sq=creative%20music%20studio&st=cse&oref=slogin in the New York Times of Oct. 21), Steven Bernstein drove the point home like a true entertainer. Fronting his nine-piece Millennial Territory Orchestra (MTO), the trumpeter eased into spoken-word over a dark funk vamp that turned out to be “St. Louis Blues,” reflecting back on his arrival at CMS in 1977, at age 15. His friend Peter Apfelbaum, tenor saxophonist with MTO, had been there too (he was 16). These were interesting times for impressionable young players. New global sounds colored the vocabulary of jazz, thanks to figures like Don Cherry and Collin Walcott. Others, including Braxton, Rzewski and Roscoe Mitchell, were blurring the lines between improvisation and composition, jazz and concert music. Non-hierarchical approaches to education and performance were gaining ground. More than any one sound or style, CMS was about openness and variance of expression. Bernstein and his group took delight in underscoring this at Symphony Space.

To get a sense of the long-overlooked art that came out of CMS in its prime, one could do worse than to pick up The Complete Arista Recordings of Anthony Braxton, a new eight-disc box from Mosaic Records. Happily, Braxton was on hand to salute his CMS days, beginning the evening with Berger and his wife, vocalist and CMS cofounder Ingrid Sertso. The three joined in an extended improvisation, the most inward-looking, meditative part of the program. Braxton played alto, soprano and sopranino saxophones, shaping long legato lines through circular breathing, building to dramatic growls and high whistles. Sertso’s role, though intriguing, seemed more peripheral; her syllabic and rhythmic lines culminated a couple of times in a sighed phrase, “Say it isn’t so.” (Perhaps a Sarah Palin reference?) Berger mused in a pastoral ECM-like vein on piano before walking over to the vibraphone to outline something more cryptic and jagged. Before he could return to the piano, a pulsing tempo arose from voice and sax, for merely a minute. The logic seemed irresistible: end the piece here, on a hint of emerging solidity.

John Zorn’s duo set with pianist Sylvie Courvoisier was more of a battle cry: a welter of thundering prepared piano sounds and post-tonal harmony, with more circular breathing as well as spray-mists of saliva issuing from Zorn’s brutal alto sax. Unlike the previous group, Zorn and Courvoisier played shorter, self-contained pieces-three in all, plus a longer one with MTO drummer Ben Perowsky that began as a duo and expanded with Zorn’s most straightforward, lyrical playing of the set. Wholly different in mood from Braxton-Berger-Sertso, the Zorn-Courvoisier music still flew well within the CMS orbit.

And so did Bernstein’s MTO, which played everything from little-known 1920s trad-jazz to Prince’s “Darling Nikki.” Bernstein rocked out on both slide and standard horns, supported by Perowsky, guitarist Matt Munisteri and bassist Rene Hart (subbing for Ben Allison). The section playing on the swing numbers was impeccable, as tight as the Lincoln Center Jazz Orchestra on its best day. Apfelbaum, violinist Charlie Burnham, trombonist Clark Gayton, clarinetist Doug Wieselman and baritone saxist Scott Robinson meshed beautifully and turned in fine solos. Munisteri sang “It Makes No Difference Now” in a loopy country-jazz spirit, adding a tart, bop-inflected chorus on his vintage archtop.

Even in the midst of such a potpourri, Bernstein’s swagger and frolicking irreverence can begin to seem monochromatic. But leave it to him to riff on current events in a way no one could expect. Mentioning Barack Obama’s stature as a unifying candidate, Bernstein warned of certain divides that can never be bridged. For instance: Is your favorite trombonist Bill Harris or Dickie Wells? “There is just no way we are going to reach across the aisle on these issues,” he said, with high seriousness.