Skip to content
Become a member and get exclusive access to articles, live sessions and more!
Start Your Free Trial
Home > JT Archives > Craig Harris: Outside the Veil 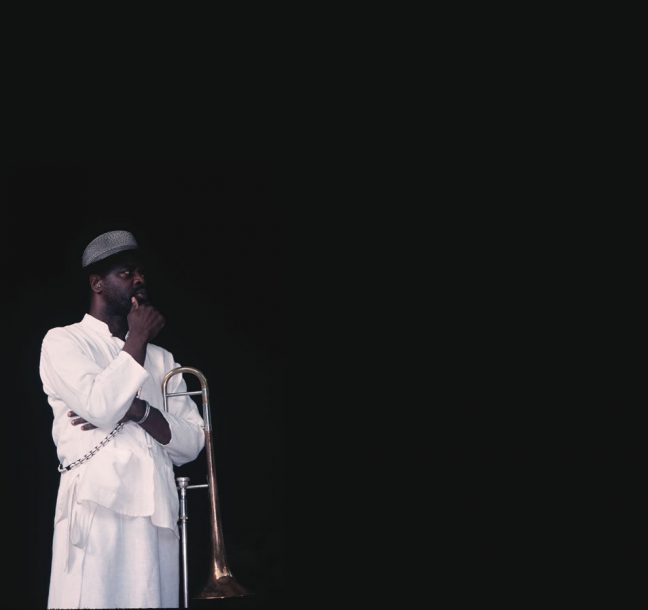 It was more than 15 years ago that trombonist Craig Harris began searching for alternatives to the jazz clubs he had played as a sideman with Sun Ra, Abdullah Ibrahim, Sam Rivers and Lester Bowie as well as with his own groups. “I saw the limitation of the music industry; not the music, but the music industry,” Harris says. “We started seeing fewer European tours, fewer gigs in the States, and the money was down all over. So I wanted to go a different road and started to do the multimedia pieces.” So he established Nation of Imagination Inc., a nonprofit organization devoted to the development of large-scale multimedia collaborative works.

Harris’ first endeavor in this new direction was “The Circle Unbroken Is a Hard Bop,” a collaboration with poet Sekou Sundiata that premiered in 1992 at City College of New York’s Aaron Davis Hall and subsequently toured colleges and fine arts institutions around the country before settling in for an extended run at New York City’s Nuyorican Poets Cafe. “In those settings I was exposed to a new audience–people who don’t go to jazz clubs but might go see theater or dance or poetry,” Harris says. “So we got some different people coming to see us without losing our musical integrity.”

A string of subsequent multimedia pieces–1994’s “Lost in Translation,” 1996’s “Return of Elijah,”1997’s “Remember We Selves,” 2000’s “Udu” and 2004’s Bessie Award-winning “Brown Butterfly,” based on the physical movements of boxing legend Muhammad Ali–earned Harris more kudos in the alternative-theater community. “And the by-product of these pieces is that I’m left with these incredibly tight ensembles,” says Harris, who has presented major works at the Walker Center in Minneapolis, Brooklyn Academy’s 651 ARTS space, Harlem’s Schomburg Center and the Massachusetts Museum of Contemporary Arts. “So once the show’s over, we can still play the music in concert and club situations.”

His latest large-scale work, “Souls Within the Veil,” premiered last summer at the National Black Arts Festival in Atlanta. (A two-CD set documenting that performance is available through Harris’ Web site, craigsharris.com.) In creating this soul-stirring work to commemorate the centennial of W.E.B. Du Bois’ 1903 book, The Souls of Black Folk, Harris drew upon fragments of hymns, or “sorrow songs,” that appear at the end of each chapter of Du Bois’ masterwork. “Du Bois’ position was that enslaved Africans gave one of their greatest gifts to the world in this music created in this country and based on these hymns,” Harris says. “And it’s not the hymns themselves, since some of them can be traced back to England, but it’s what enslaved Africans did with them. That aesthetic, that spirit of possession–that is the key here.”

As can be heard on Souls Within the Veil, Harris conjures up that intense spirit, backed by an all-star crew in saxophonists Oliver Lake, Hamiet Bluiett and Steve Coleman, trumpeter Hugh Ragin, cornetist Graham Haynes, clarinetist Don Byron, bassist Cecil McBee, drummer Billy Hart and percussionist Kahil Zabar. “I chose musicians whom I thought were like-minded, operate at a very high level and exist within this veil between European influences of music and the African realm of music, between notated music and improvised music,” Harris says. “They all checked their egos at the door when they came in and really let me bring this music together.”

Continuing his efforts to open up alternative venues to jazz, Harris is offering up his own Harlem brownstone for a concert series that has gained momentum in the past year. “We’re presenting music in people’s houses,” says Harris, a Harlem resident since 1977. “I know people in New York, Philly, D.C. and Baltimore who have these beautiful big brownstones where you can fit about 60 people. So we decided to rent some chairs and start giving concerts. And we created a little circuit for musicians and the public. We call it the Safe House series. It’s really going back to the loft days, where we were taking control and presenting our own thing.”