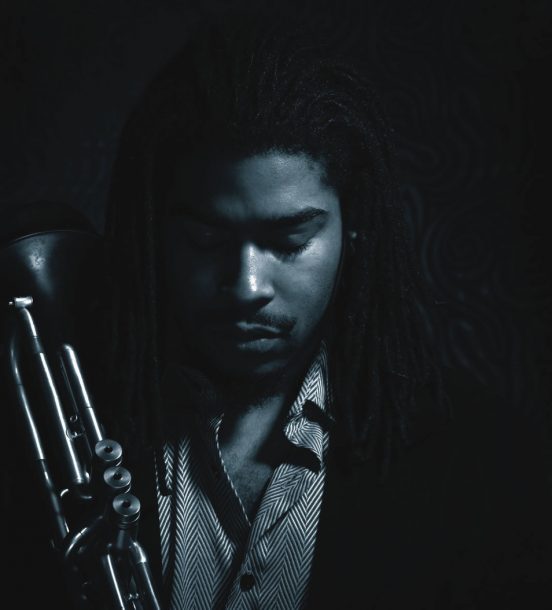 When musicians are as versatile as Corey Wilkes, the sky is the limit when it comes to choosing which direction to take on a debut album. The 29-year-old Chicago native has employed his crackling tone and improvisational swagger to a handful of forward-thinking jazz ensembles, including cornetist Rob Mazurek’s Exploding Star Orchestra and the Art Ensemble of Chicago, and has collaborated with maverick artists like Tortoise and broken-beat genius I.G. Culture. Wilkes’ comfort level at playing in different idioms recalls ’60s-era Freddie Hubbard, who played on hard-bop sessions led by Art Blakey and J.J. Johnson, among others, then rocked it on landmark LPs by Andrew Hill and Eric Dolphy.

When it came to deciding what he wanted to do on his maiden release, Wilkes originally aimed for a more straight-ahead session, but says Delmark Records encouraged him to record between 80 and 90 percent of his original compositions. Delmark’s persuasion led to Drop It, a hard-hitting disc that differs greatly from most of Delmark’s postbop and free-jazz discs in that it finds Wilkes borrowing rhythms from R&B and hip-hop for his tunes. “Most of the things that I write for the group that I was planning on recording with were not avant-garde or straight-ahead pieces,” Wilkes explains. “This [disc] just reflects the style of music that I’ve been writing recently.”

When asked to discuss his approach to sound and improvisation, he humbly replies that they’re still developing. As for composing, he explains that dance aesthetic greatly informs his recent work. “I grew up listening to R&B, funk and hip-hop. I’m always around dance and feel-good music,” Wilkes says, before explaining that he purposely integrated popular rhythms to make his music more accessible for jazz neophytes.

Those popular elements hardly dampen the proceedings on Drop It. Wilkes and his deft 10-piece ensemble, which includes a former Miles Davis sideman, keyboardist Robert Irving III, engage in some noteworthy collective dialogue, goading and animating grooves with sizzling improvisations and electric textures that prevent compositions such as the driving “Ubiquitous Budafly,” with its noticeable four-on-the-floor house undercurrent, the swaggering “Sonata in the Key of Jack Daniels” and the menacing “Remy’s Revenge,” from sounding rote.

Wilkes began turning heads on an international level, playing with AACM (Association for the Advancement of Creative Musicians) stalwarts Roscoe Mitchell, Ernest Dawkins and Kahil El’Zabar, respectively. While playing in Dawkins’ big band at a 2001 Chicago gig, he met Mitchell, who was the band’s special guest. Mitchell shared his interest in Wilkes with his drummer, Vincent Davis, which led to a musical meeting between Wilkes and Mitchell. “I ended up driving up to Roscoe’s house. We read through some music that he was thinking [of recording] for his upcoming album,” Wilkes recalls.

That pivotal meeting eventually became an audition for Mitchell’s Note Factory. Wilkes tells a humorous story about his initial frustration with playing with Mitchell during that time, wherein the saxophonist constantly interrupted Wilkes during their impromptu sessions. “After two hours of playing, Roscoe said, ‘Let’s play some notes,'” Wilkes laughs. “Then we just go out. He stopped me within five seconds: ‘No, no, no, no. Ready? Go!’ Then he went off into another tangent of notes and within 10 seconds, he stops me again. He did this at least about four or five times. About that time, I was getting aggravated, thinking he was being very elusive and not explaining what he wants me to do.

“Roscoe doesn’t like people to follow him while playing,” Wilkes explains. “He’d play a lick and then I would mimic him. After getting pissed off about being interrupted, I just started playing anything. Then he says, ‘Yeah, yeah, yeah! Now, you’re getting into it!'”

That meeting led to Wilkes playing on Mitchell’s 2002 album Songs for My Sister (Pi). Four years later, Wilkes made an even more auspicious recording date with Mitchell on the Art Ensemble of Chicago’s Non-Cognitive Aspects of the City: Live at the Iridium (Pi, 2006) on which he filled the trumpet chair left vacant after the legendary Lester Bowie died in 1999. It was a situation that any succeeding trumpeter would find daunting. “I knew it was going to be a rough seat to fill, because it was one of those ‘damn if you do, damn if you don’t’ situations, with some people saying, ‘He doesn’t sound anything like him; how could they let this guy play with them?’ Then you have the other people saying, ‘You sound just like him. Why didn’t he get his own thing?’ Luckily, I found some common ground between both of those peoples. I haven’t had any issues from playing with the group and people have been very welcoming every time I come to another city with [the Art Ensemble],” Wilkes says.

As Wilkes continued working with Mitchell, he also kept playing in El’Zabar’s Deeper Soul project. Although both situations were decidedly avant-garde, Wilkes says that, at first, going back and forth between the groups was challenging. “Even though Kahil’s project is avant-garde, it still has a lot of groove elements to it. Roscoe’s thing is totally night-and-day different from that, but they’re both avant-garde. Playing with both of them, it was a little confusing at first,” Wilkes says. Nevertheless, Wilkes acknowledges the benefits of playing in those different avant-garde settings, arguing that they’ve enlivened his playing even when performing straight-ahead. “I feel freed up from playing direct changes when I play straight-ahead. [Those experiences] helped me get a little more swagger in my style.”

Through his associations with Mitchell, Dawkins and El’Zabar and other musicians, and hanging around Chicago’s Velvet Lounge, Wilkes became an official member of the acclaimed organization in 2005, joining the likes of Nicole Mitchell and Montana Roberts as its new torchbearers. And following the tradition of many AACM members being prolific recording artists, Wilkes is already working on his a new disc for Pi Recordings, Cries From tha Ghetto, with his Abstrakt Pulse group. “It’s going to be some out shit,” he promises.