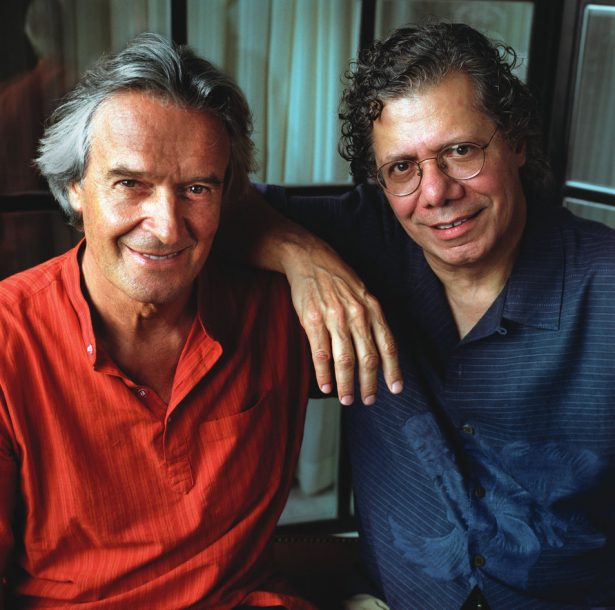 Not long after Chick Corea finally got around to reviving Return to Forever, he’s taking yet another look back. He and John McLaughlin have traveled vastly different journeys in the four decades since they made significant contributions to Miles Davis’ breakthrough groups of the late ’60s. But neither the uniqueness of their musical choices nor the comparable qualities of their artistic creativity has diminished over the years. So it was probably inevitable that they would eventually find a way to team up on a musical project. The result is the Five Peace Band. (No misspelling there: The title traces to a selection on McLaughlin’s Floating Point CD.)

After a month-long tour of Asia and Australia, the ensemble made its first U.S. appearance on Thursday, March 19, at UCLA’s Royce Hall. The Asian tour included Corea, McLaughlin, alto saxophonist Kenny Garrett, bassist Christian McBride and drummer Brian Blade. But at UCLA, as well in successive March dates in California and Denver, Blade has been replaced by Vinnie Colaiuta, who had performed with the Five Peace Band during its 2008 European tour (chronicled on a Concord double-album-Five Peace Band Live-available online now and on disc April 28). Blade returns to the drum chair from March 27 (in Miami) until May 1 (in Burlington, Vt.). (The complete tour schedule can be accessed at the band’s official Web site.)

The opening of the program at Royce made it immediately apparent that this wasn’t exactly going to be the Chick Corea of Return to Forever, his solo playing, his duets with Gary Burton and Herbie Hancock, or his acoustic and electric quartets. Nor was it the John McLaughlin of the Mahavishnu Orchestra, Shakti or the Guitar Trio. And it wasn’t Bitches Brew, either. Instead, a rush to be contemporary was clearly in the air, leaving something significant behind. That’s not to say that these two veterans should simply recycle the many glories of their past achievements. But one would hope that their reunion would produce something reflective of the inspired musical adventures that have characterized each of their remarkable careers. Yet, more often than not, the music had the feeling of sketches rather than fully imagined musical visions, of loose frameworks for long, extended soloing rather than the subtle interaction between improvisation and composition that have been fundamental qualities in the work of both Corea and McLaughlin.

Still, any ensemble with the sheer musical firepower of the Five Peace Band is going to have a lot with which to grip an audience’s attention. And there was no doubt that the overflow crowd was hanging on every note, giving standing ovations after every number, sometimes after individual solos.

Most of the evening was devoted to soloing. But it was soloing that often seemed to have less to do with creative interaction than it did with fast-fingered technical virtuosity.

There’s no denying that Corea’s rapid forays across the keys and McLaughlin’s astonishingly high-speed guitar passages were impressive. Garrett, especially during a very long, extended solo on Corea’s “Hymn to Andromeda,” took a different route, scouring every inch of his horn, allowing his avant-garde roots to fully blossom. But, for the most part, it was McBride, playing electric and acoustic basses, whose soloing found a focus and a sense of musical coherence in the midst of his equally virtuosic articulateness.

And I couldn’t help but wonder how different this music sounded with Blade playing drums rather than Colaiuta. A pair of new pieces by Corea-“The Disguise” and “Hymn to Andromeda”-suggested a potential for the sort of rich, creative density of his works for RTF. McLaughlin’s “New Blues, Old Bruise” provided a lively vehicle to cruise in another, different direction. And the closing choice of Jackie McLean’s “Dr. Jackle” offered other possibilities for musical expansion. But, aside from a few segments that demanded a more subtle approach-an occasional atmospheric interaction between guitar and keyboards, Corea’s science fiction-y stroking of the piano strings in the opening of the “Hymn”-virtually everything else was driven by a surging, often overwhelming storm of intense drumming.

Colaiuta’s playing may have had a better balance within the ensemble during his tenure with the band in Europe. He is, after all, a superb player with a diverse track record. Still, it would be valuable (if unlikely, given the release schedule) for the double album to offer more than the European tour, and include selections from both versions of the band, displaying the effect of the very different styles of Blade and Colaiuta. Somewhere within the sturm und drang of the Royce Hall concert there was an undercurrent of remarkable possibilities. Hopefully they will be fully revealed during the balance of the tour and in its recorded chronicle.