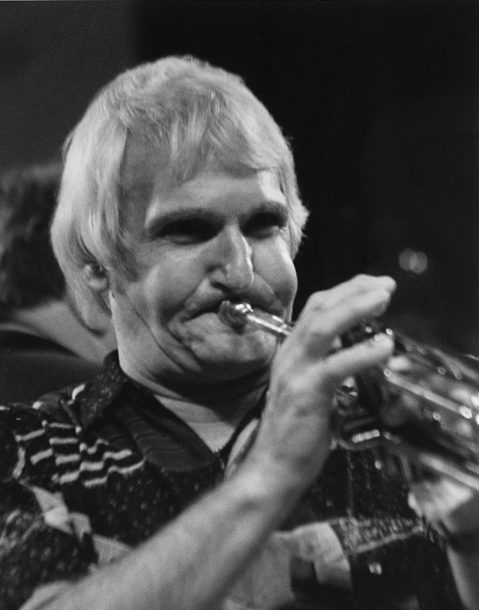 During the 1950s Chet Baker received a great deal of publicity due to his drug problems. But Conte Candoli, not Baker or even the popular Shorty Rogers, was the best L.A.-based jazz trumpeter. Now 73, Candoli continues to perform laudably, as his recent albums on the Fresh Sound label, Portrait of a Count and Conte-nuity, indicate. He swings in a relaxed manner, improvising melodically. “I’m happy with [those CDs]. Having to avoid a lot of upper register work above high C has made me more creative. The key is to create on the tunes.”

If anything Candoli’s tone and lower register work are fuller and richer than ever because he doesn’t employ the upper register too much now due to recent dental problems. He was a high-note master as a youngster, but now Candoli says, “As long as I can create within the staff it’s fine.” On both Fresh Sound CDs Candoli leads a quartet containing bassist Chuck Berghofer, drummer Joe Labarbera and young pianist Jan Lundgren, a skilled, technically accomplished and knowledgeable repertoire musician.

Candoli’s had a long and praiseworthy national career, dating back to 1945, when he played in Woody Herman’s trumpet section with his brother, Pete, and took his first recorded solo on the Thundering Herd’s “Put That Ring on My Finger.” After Army service in 1945-46, Candoli toured and recorded with a variety of groups. Around 1949 Candoli’s main influence was Dizzy Gillespie, but he had his own take on Dizzy’s style and word about him was getting around. Candoli remembers Miles Davis congratulating him on a solo he took on Charlie Ventura’s “Smoke Gets in Your Eyes.”

“Back in the ’40s I was coming right out of Dizzy. Quite possibly Miles influenced my work later. I liked what he was doing. I got to think more melodically,” says Candoli. In the early 1950s Candoli’s synthesis of Gillespie and Davis’ styles, plus his own full, warm tone, caused him to sound coincidentally like Clifford Brown, who also was forming this approach then.

During 1952 and ’53 Candoli was a member of Stan Kenton’s very popular big band, which gained him more attention. In 1954 Candoli cut his first album, a 10-inch Bethlehem LP with pianist Claude Williamson. Both players are on fire; it’s a shame the recording has been out of print for so long because it contains some of the best bop and post-bop trumpet work ever recorded.

In 1956 Conte toured with an all-star group, The Birdland All Stars, which cut a couple of LPs for Victor. The band included Kenny Dorham, regarded as among the top post-bop trumpeters. A mark of Candoli’s excellence is that he easily holds his own with Dorham. Why then didn’t Candoli get more praise from critics? Part of the reason has to do with him playing with so many West Coast cool jazzmen, some of whom-e.g., Dave Brubeck-were overrated. Around 1960 there was a sour reaction to West Coast cool jazz; as a result, some excellent artists were unfairly dismissed or became taken for granted. Among the ignored was Candoli, though, ironically, he was an extroverted post-bopper, not a cool stylist. He just happened to record with a lot of them.

Beginning in the mid-’50s, Candoli freelanced as a studio musician and continued this for decades; his most high-profile gig was with Doc Severinsen’s Tonight Show band. While Candoli did get some attention as a soloist with Supersax in the 1970s, and has appeared on tons of jazz and pop records, he seldom recorded as a leader, which is another reason he hasn’t gotten as much credit as Baker. Candoli hopes to record again at the end of the year, possibly with other horns, and maybe he’ll start to get the recognition he deserves.