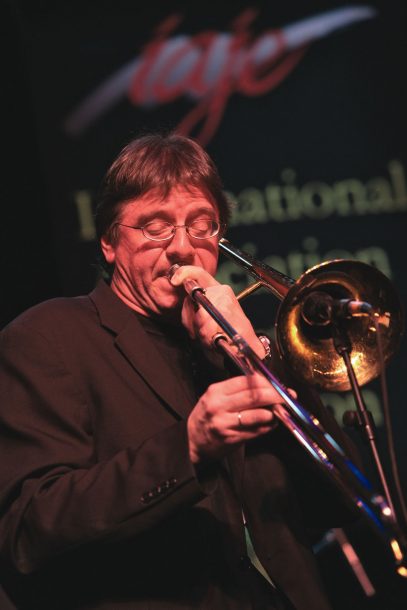 Everybody’s doing an Afro-Caribbean record now because it’s in vogue,” said Conrad Herwig, 47, discussing his new album, Sketches of Spain Y Mas: The Latin Side of Miles Davis. “But we’ve earned our salsa badge. Brian Lynch and I have performed thousands of salsa gigs over 20 years with Eddie Palmieri. I take it very seriously.”

In fact, Herwig first began playing Latin music while a student at the University of North Texas. For a trombonist, it was where the work was. “The Afro-Caribbean genre is very rich with brass playing, especially trombone. When I was in Texas I played cumbia and Tejano music and when I moved to New York I started playing a lot of salsa and was a sort of protégé of Victor Paz.”

Through Paz he eventually worked with Latin-jazz giants such as Mario Bauza, Dizzy Gillespie, Paquito D’Rivera and Tito Puente. But the most important connection formed was with Eddie Palmieri, in whose band Herwig began working alongside trumpeter Brian Lynch.

“We have been playing with Eddie Palmieri since the ’80s. Eddie’s a real free thinker so a lot of times there’d be room for us to take chances, sometimes we would play backgrounds and jam on Eddie’s forms but use tunes like ‘Blue Train’ or ‘Impressions.’ It worked so well that I thought, ‘Wouldn’t it be cool to do a whole project of these tunes?'”

In 1996, Herwig recorded The Latin Side of John Coltrane, which reinterpreted some of the most famous modern jazz compositions over a framework of Afro-Caribbean rhythms. The album, which was nominated for a Grammy, was an exciting project for the musicians involved, combining two rich traditions.

“Quite frankly, a lot of times when you play a salsa gig there’s not a lot of jazz soloing. Eddie created the genre where there was a lot of soloing and a lot of interaction and riffing. From a jazz perspective, it’s the richness and the variety of the harmony for us to improvise over. From an Afro-Caribbean perspective, it’s maintaining the sense of clave and trying to fit the melodic idea into the rhythmic form. It’s a good challenge and very rewarding.”

The synthesis clearly worked for listeners as well, drawing both jazz and non-jazz audiences.

“We were playing a Heineken festival in the Canary Islands. It was on a beach and we were playing Coltrane’s music-I believe it was ‘Blue Train.’ And there were several thousand people on this beach dancing salsa to Coltrane’s music! And there were a similar number of people hanging around the bandstand checking out the solos. Wynton Marsalis reminds us all the time that jazz was originally dance music, and it’s fun to play music that’s accepted but also challenging.”

In 2004, Herwig released a second album of Coltrane material-Que Viva Coltrane-as well as Another Kind of Blue, the first “Latin side of Miles Davis” album, which went on to receive a Grammy nomination.

The new album, on Half Note Records, includes classic Davis compositions “Solar,” “Seven Steps to Heaven” and “Petits Machins.” The core of the album, however, is the nearly 25-minute version of “Sketches of Spain.” Herwig, who worked for years with the Gil Evans Orchestra, had performed some of the “Sketches” arrangements with Davis in 1991, and long wanted to revisit the music.

“Jazz musicians have a repertoire of tunes like ‘Solar’ and ‘Seven Steps’ and ‘All Blues’-those get played. But very rarely, if ever, will you get a chance to improvise on ‘Sketches of Spain.’ So for us it was exciting to give us a different vehicle for improvisation.”

The arrangement for the large piece developed organically. “Paul Holderbaum organized the themes and then we rehearsed and started putting rhythmic patterns and dividing the themes so that each person in the band would get a solo spot. Little by little we worked on refining the harmonies and the backgrounds, and the solo sections and the overall shape took place.”

They will be on the road this summer, touring Europe and playing the North Sea Festival where Herwig received the prestigious Paul Acket Award for the “Artist Deserving Wider Recognition.” In addition, Herwig and the band are already working on their next project, a recording devoted to the compositions of Wayne Shorter that will feature special guest Eddie Palmieri.

Herwig admits feeling some trepidation when interpreting such classic material.

“But the great thing about jazz is that nothing is so sacred that it can’t be recomposed and reinvented and rediscovered. Jazz is about taking chances and searching to see if you can find something in that piece for yourself.”