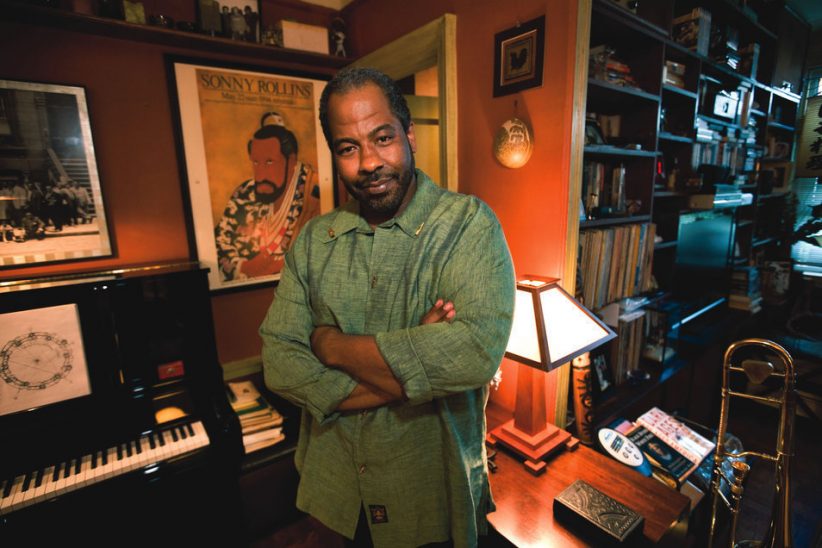 Plenty of jazz musicians and fans have pictures of Sonny Rollins hanging in their homes. Very few of them, however, choose to hang the legendary saxophonist’s junior-high class photo. But for trombonist Clifton Anderson, the Saxophone Colossus is also known as “Uncle Sonny.” That childhood snapshot (in which Rollins is instantly recognizable) hangs above an earlier class photo in which sits his sister, Anderson’s mother.

Anderson’s apartment, the upper half of a Bronx duplex, is peppered with photos of Rollins and mementos from their travels together. His coffee table sits on a rug bought in Istanbul, while a didgeridoo from Australia sits propped in a corner. Most prominent are artifacts from numerous visits to Japan, where audiences revere Rollins and his band.

“The first time I went to Japan with Sonny was an amazing experience,” Anderson recalls. “I wasn’t prepared for the 15-hour plane ride, so when I finally got there I was really discombobulated. I didn’t really know his stature in Japan, and when we got off the plane it was like the Beatles had landed. There were four television cameras, 30 or 40 photographers, all these lights flashing off. They followed us through the entire airport. We got to the hotel and I’m exhausted, flipping channels looking for an English channel, and I came upon a news broadcast and there we are.”

Anderson’s parents bought the house in 1967, when he was 10 years old. They gave him the house in 1988 and he’s lived there since, renting the ground floor to a pair of ex-singers for flamboyant televangelist Reverend Ike who don’t mind him practicing at all hours.

He shares the apartment with his girlfriend, cellist Nioka Workman, daughter of bassist Reggie. Anderson describes himself as a homebody when he isn’t touring, and the two generally cook for themselves. “I usually eat in because I try to watch what I eat,” he says. “I was a full-blown vegetarian for eight to 10 years and then I drifted back into fish. So I’ll usually cook fish with different vegetable combinations. My girlfriend says she can’t eat anywhere else because she likes my cooking.”

Though the house is a short walk (albeit one involving a steep concrete staircase) from the Grand Concourse, the Bronx’s busy main thoroughfare, Anderson calls the quiet, family-oriented block an “oasis.” Inside, he’s created a further oasis, the windows crowded with plants that provide an idyllic scene blocking out the urban landscape. Over the small back courtyard hangs a flourishing grapevine, which Anderson insists yields delicious grape juice (he’s given up the more demanding ritual of making wine).

“I was born in Harlem and I’ve been living in New York City all my life,” Anderson says, “but at this point I’d like to make a move outside of the city. I used to spend my summers on Martha’s Vineyard with my other uncle, and I got used to being in the country, by the seashore. So I’d really like to get out of here and transition into a more country kind of scenario.”

One remnant of Anderson’s childhood on the vineyard sits on a shelf above his piano: a tennis trophy earned in a junior tournament. “I actually wanted to become a professional tennis player,” he says. “There was a point when I had to decide between playing music and playing tennis, and music won out.”

Anderson suffered from asthma as a child, so his mother took him to Martha’s Vineyard for the sea air. Every summer, he would sit at the tennis courts and watch the players. When he was 11, a woman approached who had noticed him there and took him under her wing. “She happened to be the wife of a prominent doctor and they started sponsoring me,” he says. “Tennis was a pretty expensive sport.”

The Vineyard being the playground of the rich and famous, Anderson had a few encounters with celebrities during his youth. “I saw [former New York City mayor] David Dinkins a few years back at an awards show,” Anderson laughs, “so I went over to him and said, ‘Mayor, I know you don’t remember me but we used to play tennis all the time up on Martha’s Vineyard. I was a young guy and used to beat you all the time.’ He kind of brushed me off. I guess I shouldn’t have said that.”

Anderson doesn’t have much time for tennis these days. Besides his busy touring schedule with Rollins, he’s now running his uncle’s recently launched Doxy Records label, for which he’s been compiling live tracks for Road Shows, a new release spanning concerts from 1978 to last year’s landmark Carnegie Hall show. He’s also preparing to release his own new CD, Decade, and hoping to do more touring under his own name.

All of this happens in a narrow home studio that’s part recording studio, part design workstation and part business office. “Everything converges here,” Anderson says. “It looks calm in here right now, but believe me, it gets crazy.”