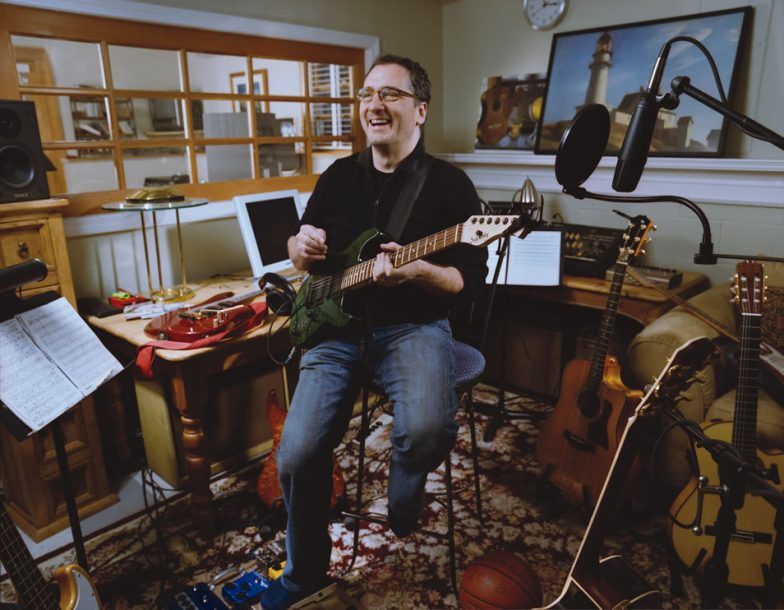 Main Street in Irvington, N.Y., slopes down a steep hill to offer a commanding view of the Hudson River. Chuck Loeb lives here with his wife, vocalist Carmen Cuesta, on a quiet side street, in a beautiful, cleanly appointed house with a deck overlooking the backyard. Their two daughters, Christina (19) and Lizzy (18), attend Tufts and Boston College, respectively. Because their mother is from Spain, the girls have dual citizenship and are bilingual. Loeb speaks Spanish as well, and when his schedule permits he spends summers with the family at their second home in Castellon (near Valencia).

This year, Chuck and Carmen celebrate their 25th wedding anniversary. Their best man was a fellow musician by the name of Stan Getz. Loeb got his big break with Getz in 1979, joining a band that included Mitchel Forman, Mark Egan and Victor Lewis. Working with a jazz master and gaining exposure as a player and composer was reward enough, but while on tour, Loeb also happened to meet the love of his life. Sure enough, Getz is in the wedding photos, standing right next to the bride and groom.

There’s a guitar in nearly every room of Loeb’s house, and this is deliberate: “So I don’t have any excuse not to practice,” he says. Downstairs is the home studio, where Loeb recorded his seventh and latest album for Shanachie, When I’m With You. He also does production work here, including tracks for Carmen’s CDs. “Even a lot of session dates have become home-based,” Loeb says. “They send me the files over the Internet and I add my [guitar] stuff. It’s very effective because I have all my sounds here and I can do it at three in the morning, in my pajamas.”

Loeb’s recording credits span three pages on AllMusic.com. In addition to working with everyone from Steps Ahead and Eddie Daniels to Taylor Dayne, Loeb also wrote one of the most recognizable themes on TV: an ascending four-note fanfare capped by a staccato three-note riff, which serves as station identification for CNN to this day. He has also played on a number of movie soundtracks, including The Untouchables (under Ennio Morricone), You’ve Got Mail and the latest Will Smith vehicle, Hitch. But he always returns to his own music, and this season he’s playing out in support of When I’m With You. His road band features Mike Ricchiuti on keyboards, Brian Killeen on bass and Josh Dion on drums. (Killeen and Dion have made waves on the jam-band circuit with the group Ulu.)

Despite his many years in the game, Loeb is far from jaded. He’s positively starstruck, in fact, when he recounts a recent guest appearance with Bob Dylan at New York’s Hammerstein Ballroom. Loeb sat in on “All Along the Watchtower,” “Mr. Tambourine Man” and two lesser-known songs. “The first song I ever learned on guitar was ‘Like a Rolling Stone,'” Loeb says. “Dylan turned to me after one solo and said, ‘Yeah, Chuck,’ and I thought, ‘OK, I can die now!'”

Jamming with Dylan may be cool, but nothing beats the simple life in this idyllic Westchester County ‘hood. Loeb is in fact a member of what’s jokingly called the Westchester Jazz Mafia. Current or former residents of the area include Michael Brecker, John Patitucci, Tim Ries, Bob Mintzer, Alex Bugnon, Bob James and even Stan Getz himself. The Hudson waterfront beckons, even on a day as cold as this. After we wrap up the photo shoot and chat for a bit in the driveway, Loeb adjusts his hat and scarf, then saunters off to meet his wife, down by the riverside. JT

“I’m an e-mail junkie, an Internet junkie,” Loeb says. He has a Mac-based HD3 Pro Tools system with “mirror image” monitors: one in the control room, one in the playing room. “I’ve been involved with home recording from its inception, and I’ve watched the whole thing shrink and shrink, and get more and more powerful.”

“We’re Swedish-car people; we’ve always had Saabs and Volvos. But we also have a Chevy Suburban and we love to take long drives-it’s part of our family lore.”

The family is serious about tennis. “Often those are our vacations: We drive down to a tennis center in Hilton Head, South Carolina. My daughters teach tennis in Spain during the summer. Over there you can play on red clay.” Loeb is also a huge Yankees fan. “I like baseball on the radio, especially while I’m doing the dishes.”

“My wife’s the cook, and I’m a foot soldier in her army. We’re not vegetarian or anything. We like Mediterranean cuisine, I would say-all olive oil-based cooking, no butter.”

“I live with three women, so I don’t dress myself. Carmen has the final word.”