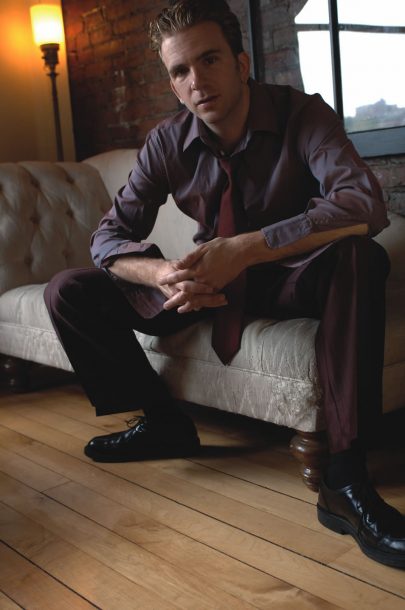 Chris Trapper looks like he could be a male crooner à la Michael Bublé. With his slicked back red-brown hair, blue eyes and lean torso, you could easily imagine this former barbershop -quartet singer sporting a snappy suit and crooning into a big old Sinatraesque microphone.

Trapper’s primary day job has been leader of the Push Stars, an alt-rock trio from Massachusetts, which has released four albums and had songs featured in films such as There’s Something About Mary and TV shows including Malcolm in the Middle. But now that the Push Stars are on semi-hiatus, might “Chris Trapper, Pop Singer” become “Chris Trapper, Male Crooner”? “In fact, I go [sing at] a piano bar in Chelsea, Massachusetts, every so often, where they sing nothing but pre-’50s standards,” Trapper says. “I switch my voice around, have a drink or two and drift away to another time. There is no songwriting I like better, as I think these songwriters were obsessed with romance, as well as character, something that is not so prioritized in modern rock.”

While Trapper, 37, doesn’t sing any standards on his second solo CD, Gone Again (available from christrapper.com or cdbaby.com), he does croon originals in a classic trad-jazz style, helped out by the Wolverine Jazz Band. “I don’t think there was time to be tempted,” Trapper says as to why he didn’t do any standards. “The guys and I basically learned all the songs in one night, and then recorded it in just one night.”

It wasn’t the first time Trapper worked with the Wolverine Jazz Band. The Push Stars contributed a cover of Steely Dan’s “Bad Sneakers” to the Me, Myself & Irene soundtrack, and Trapper, frustrated by his inability to nail a solo, called in the Wolverines to help reshape the tune. After that collaboration, “Chris and I met for coffee one day, and he suggested the idea of our collaborating on a more ambitious level,” says John Clark of the Wolverine Jazz Band. “He gave me a CD of demos of songs that he thought might work with our style, and after listening I concurred with most of them. In general, I’ve always been impressed with his musical constructions and the combination of erudition and humor of his lyrics, so I was quite enthusiastic about the prospect.”

While many of the songs retain a singer-songwriter folk feel, just as many sound like they’ve come straight out of the 1920s and ’30s, thanks to the Wolverines’ hot-jazz sound. “I wanted to record the CD live, without any stopping and starting-and certainly without any Pro Tools-and I think the exuberance of Dixieland jazz music lends itself perfectly to that,” Trapper says. “I also felt that trad jazz could cross some musical generations; that it would be great if somehow I could get young fans to hear it and hear how accessible it is.

“I think traditional jazz is totally rooted in pop music-and pop music is where I live,” Trapper says, but he soon realized that you don’t necessarily record old-school jazz with new-school methods. “I automatically tried to set everyone up in isolation booths-you know, the drums in one booth, the horn over there, the tuba in another spot. And the guys just stood in the center of the room looking completely perplexed as I tried to explain this setup. Then I had one of those cartoon lightbulb moments; they were trying to tell me, ‘We don’t do it like that; we play in one room together.'” Another slight clash of working methods: Trapper didn’t write the songs down on notation paper, so Clark had to transcribe the melodies and chords from the demo as well as come up with solos, backgrounds, intros and endings.

Though he never formally studied music, Trapper cites Frank Sinatra, Ella Fitzgerald and Carmen McRae among his favorite jazz singers. And a lack of formal jazz training didn’t matter, Clark says: “As a songwriter and lyricist, Chris has developed a great sympathy for the style and has an original musical personality, which is a key element for any jazz singer. Sometimes pop singers who attempt albums of standards fall a little flat in their interpretation, but Chris has the sensitivity and the vocal chops to do the music justice. He sounds more masculine than Rod Stewart and more feminine than Joni Mitchell-who could ask for anything more?”